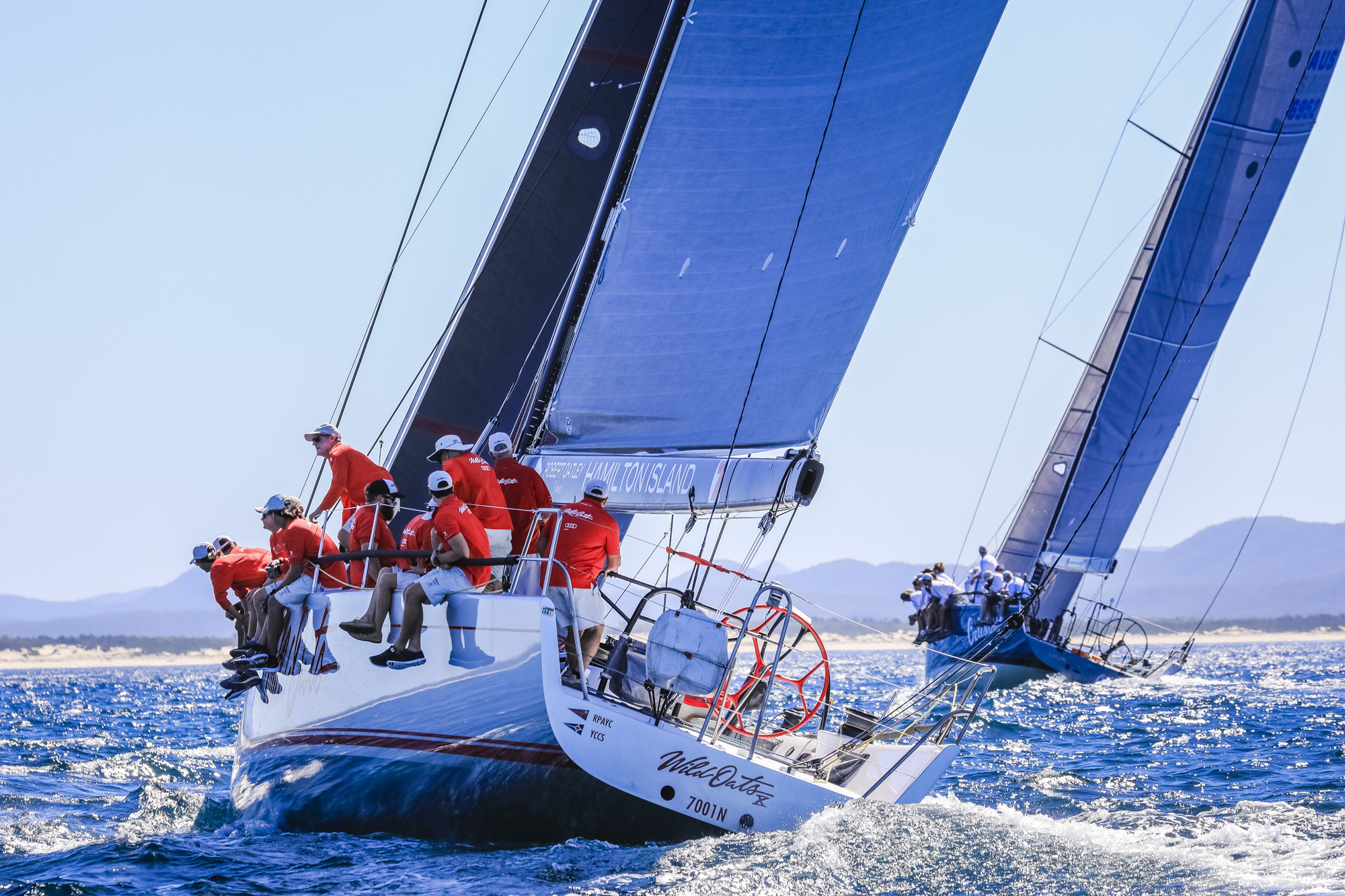 In Race 1, there was a challenging westerly, delivering 30-degree shifts. Wild Oats X was a tad eager at the start, jumping the gun along with TP52 Celestial then being eclipsed at the top mark by Marcus Blackmore’s Hooligan.

With owner Sandy Oatley finding his groove on the helm they managed to claw back the lead and take opening honours across the line. Division 2 boats faced a 180-degree shift on the last leg as a sea breeze suddenly took over.

Start 3 was equally willing, with a general recall in Division 1, but race officer Denis Thompson said the fleet was otherwise well behaved. “When the new breeze hit we went closer inshore and reset the course. From then on, we saw only 5-10 degree shifts,” Thompson said.

Oats tactician Tom Spithill was high in praise for the venue after a tactical day at the office saw them post three consecutive line-honours wins.

“It’s a great race track. There’s chances to make some gains but you can also get some predictability out of it. Everyone’s having a great time and it’s a beautiful place to go sailing,” Spithill said. “We have a relatively new crew on board but Sandy did a great job on the helm.

“We’re really looking forward to the Broughton Island passage race tomorrow. Hooligan is hanging on well in the windward-leewards so we’re hoping the passage race will let us stretch our legs.”

Tony Kirby’s Patrice 3, a regular at Sail Port Stephens, mastered the conditions to post handicap wins in races 1 and 3 to edge out Hooligan, which posted a 3,1, 2 scoreline and the TP52 Celestial. Wild Oats X sits 5th overall.

In the Performance Racing division, which sailed the scenic offshore island course after a light-air start off Nelson Bay break wall, the Sailor with disAbilities TP52 Wot Eva cleared away to a four-minute win across the line from Colortile.

Skipper David Pescud has 15 crew on board, with disabilities ranging from a bowman with spina bifida, to a blind mainsheet hand and an incomplete paraplegic.

“We’re here because we don’t want to be isolated. We like going fast and having fun,” he said. “It’s our first regatta at Port Stephens but I’ve been coming here since 1955 … It’s kind of a secret how good it is.”

Performance Cruising was divided into two divisions, among them many familiar Commodores Cup faces. Amante, Excapade and Rumba all continued their good form to be top three, with Challenge a creditable 5th across the line. Derek Sheppard’s giant-killing Spider 22 Blacksheep shone in Division 2, leading Manly Office and Sumatra.

Tomorrow has the Broughton Island passage race, which includes a brain cancer fundraising element for the Hunter Medical Research Institute in honour of the late Roger Hickman.