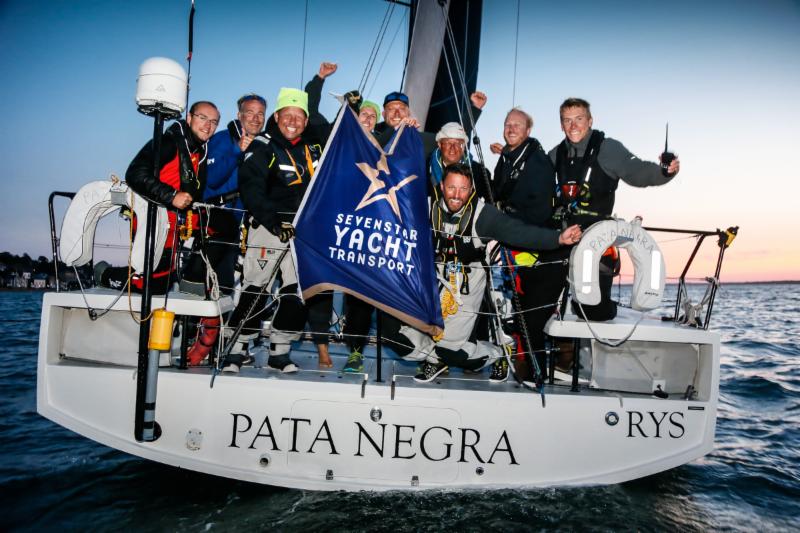 Giles Redpath's Lombard 46 Pata Negra is the overall winner of the 2018 Sevenstar Round Britain and Ireland Race. Pata Negra scored the best corrected time for yachts racing under the IRC Rating Rule for the 1,805 nautical mile non-stop race.

“To win this race overall is amazing, my greatest racing achievement to date without a doubt. It is a phenomenally interesting race, the conditions change all the time and it is a lot tougher than a transatlantic. It is full-on the whole way round and that increases the level of satisfaction when you do well. I hope that this edition of the race will encourage more people to do it. It is a real challenge and a local race for British boats, a fantastic test of yachting ability,” commented Redpath.

“We had very close racing; we even called starboard on Colombre XL (The Lost Boys) after 1,600 miles of racing and we had a very nice beer with them in the bar afterwards. The Figaro (El Velosolex SL Energies Group) sailed a great race. It says a lot about IRC that you can be racing a boat that is 24 hours behind you, but it's still very close right up until the last day. It is never won or lost until you finish, because you just don't know what is around the corner.”

Phil Sharp, skipper of Class40 Imerys Clean Energy and crew Julien Pulvé, Pablo Santurdé and Sam Matson have entered the record books with a new Guinness World Record, following ratification from the World Speed Sailing Record Council (“WSSRC”) for the Sevenstar Round Britain and Ireland Race. The team broke the record time for boats 40ft and under by some 15 hours in an elapsed time of 8 days 4 hrs 14 mins 49 Secs. Sharp commented on this remarkable achievement:

“Breaking the Round Britain and Ireland World Record was never going to be easy based on the expected conditions throughout this complicated route, which certainly made the race both demanding on a navigation and endurance front.”

“The course started and ended with slow upwind sailing, but the windy conditions passing Ireland and Scotland were so fast that it made for some seriously exhilarating sailing, where at times we averaged over 17 knots. Even after our spinnaker shredded west of Scotland, the boat was still going blindingly fast!” continues Sharp.

RORC Racing Manager, Chris Stone commented: “I would extend my congratulations to all competitors. In terms of ocean racing this is an achievement beyond most others.

“In terms of miles, this race is three Fastnets back-to-back, but in real terms, it is exponentially larger than that. We appreciate the competitors taking the standard of their boats up to Category One; that undertaking is not lost on the Club. I would like to highlight the phenomenal performances of Phil Sharp's team (Imerys Clean Energy) and Giles Redpath's Pata Negra, and also the two handed win by Ben Schwartz and Chen Jin Hao (Horace) on El Velosolex SL Energies Group. To all of the class winners, many congratulations; maintaining a competitive spirit throughout this race is an outstanding achievement,” concludes Stone.

A glittering array of trophies for the Sevenstar Round Britain and Ireland Race will be presented at the Royal Ocean Racing Club Annual Dinner & Prize Giving on November 17th, 2018.