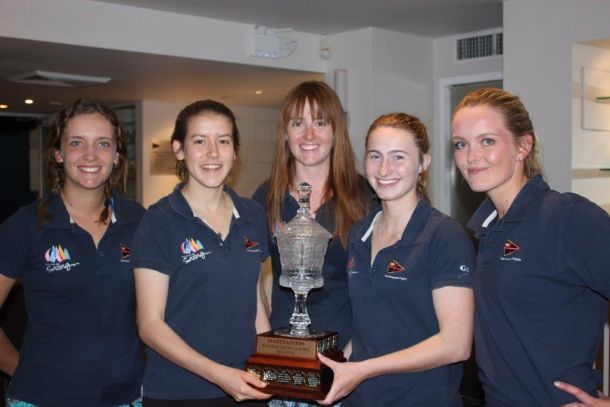 Sarah Parker and her crew of Evelyn Foster, Clare Costanzo, Rachel Bower and Lauren Crossman from the Royal Prince Alfred Yacht Club capitalised on their dominant performance of yesterday to take out the Marinassess Women’s Match Racing Regatta hosted by the Cruising Yacht Club of Australia.

Parker and her crew took on six other crews, all representatives of the CYCA. They came into the final day with a perfect scorecard of 7-7, and went on to defeat Lauren Gallaway, Rayshele Martin, Kathleen Stroinovsky, Angelique Kear and Antoinette Radford 2-1 in the final after the latter finished second-best yesterday with an 8-6 scorecard.

In the semi-final, Parker chose the crew of Kirstin Norris/Louise Tillett/Nicky Bradley/Bryony Gregory/Iris Ferguson as her crew’s opponents, defeating them 2-0 to advance to the final. “They were close matches though; in fact in the final race we only took the lead on the last downwind leg,” Parker admitted.

It left Gallaway and her crew to take on the crew of Caitlin Tames/Tara Blanc-Ramos/Nina Long/Rosie Lee/Jess Tames, whom they dispensed off 2-1 before going on to the mammoth task of facing Parker, who had not lost a match, in the final.

Despite her first women’s match racing event as a skipper, Parker said: “We played the same game as we did yesterday and tried not to get ahead of ourselves. There was a lot more pressure going into the final though. The matches were close and both crews had their chances of getting in the lead.”

The 19 year-old said of their win: “We’re stoked. It’s our first major women’s regatta win. It’s exciting to take the trophy home to our club. It was a good training regatta and I plan to keep going with match racing – it’s my main sailing ambition,” she said.

“The crew was awesome – no conflicts – we’re a happy boat,” finished Parker who returns to university in Newcastle tomorrow, where she is studying physiotherapy.

At just 16, Lauren Gallaway and her crew were thrilled with their runner-up finish. “We had a really awesome day. After beating Caitlin and her crew, we knew the worst we could do was second, so we were pretty excited,” she said.

“We had a couple of penalties through the day, but we wiped them off and stayed calm and neat and even won the match against Caitlin after wiping the penalty at the last top mark.

“All the matches were close and we learnt a lot quickly. I felt more comfortable going into today, it wasn’t as hectic. Sarah was a hard opponent, so we went at it hammer and tongs and won the first match convincingly,” she said.

“Our boat handling was good in the second match, but Sarah came off better at the start. We didn’t play it so well, and she won, but it was still close.”

Gallaway said the third match was much of the same, with a penalty against them thrown in, “but she closed it out at the finish. It was super exciting. I’m so happy with the way the girls pulled together and with all we learned. We all trained together and against each other at the CYCA’s Youth Academy this summer, and it all helped,” she finished.

Crews sailed in similar to conditions to those of yesterday, with light shifty winds to start the day off. Winds increased moderately throughout the day, helping the top two crews, both of whom had five girls aboard.

Marinassess Managing Director, John Messenger, was not able to be at the event. “I’m very sorry I couldn’t make it, I am a big supporter of this women’s event which we have sponsored since its inception,” he said.

“I congratulate all those who took part in the Marinassess Women’s Match Racing Regatta, and the winning and runner-up crews skippered by Sarah Parker and Lauren Gallaway,” he said.

Messenger, a well-known yachtsman himself, and past commodore of the CYCA, has long been a supporter and fan of women in sport. “It’s great to see so many good young women sailors in match racing and at this event. I believe all the matches were tight.”