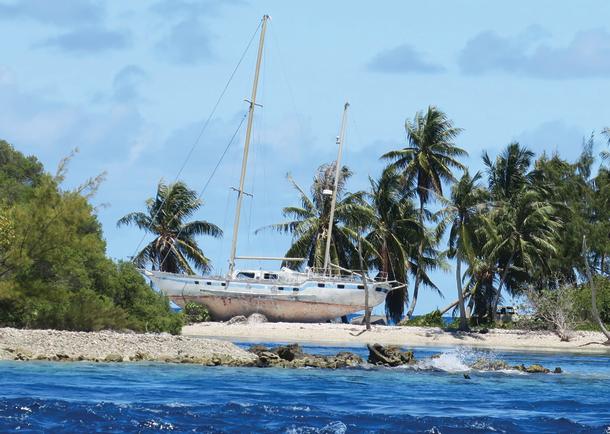 Sometimes a chartplotter will say that it is entirely possible to do this!

Last year Jasna and I were hired to deliver a 3 million dollar yacht 2000 miles from Tahiti to Fiji. When I met the owner, I asked whether he had paper charts on board. His rather condescending reply was “no. I don’t have a steam engine either”.

The implication of course is that paper charts have been made obsolete by electronics and only beardy-weirdy luddites like us still use them.

Fortunately for him, we always bring our own paper charts and were glad we did as the course the owner had entered into the electronic chartplotter would have ended in disaster, shipwrecking us no less than three times!

The problem is that there are many obstructions not shown at certain magnifications on the electronic charts and others that are not shown at any magnification. Over-reliance on electronic charting is now almost epidemic and all over the world yachts are colliding with ‘uncharted’ reefs, islets and obstructions. A minority of these incidents are indeed uncharted reefs, but increasingly the fault lies with premature abandonment of solid seamanship in favour of gadgetry.

Like rabbits blinded by the headlights of twenty first century marketing, many sailors now assume that hi-tech equals better. This is certainly an erroneous and dangerous assumption when it comes to charts.

The media must also take some of the blame. When a story breaks and the skipper claims there was no reef on the chart, the reporter takes it a face value and prints the headline: ‘Yacht lost on uncharted reef’. Later, when it turns out that the skipper was referring to the electronic chart, the story is yesterday’s news and already forgotten about.

There are seemingly endless cases of this but, most recently, an Amel 47 Morning Dove. hit an ‘uncharted’ reef just east of us in the Tuamotu Archipelago. Here is a taste of how it was reported in the media and the reaction from other sailors on blogs:

From the magazine Latitude 38: “At roughly 8p.m. Tuesday, what should have been an easy inter-island passage turned tragic, as the Alaska-based Amel 46 ketch Morning Dove — one of 183 boats registered with the Pacific Puddle Jump fleet — struck a submerged reef in the Tuamotus, while en route from Apataki atoll to Rangiroa, a passage of about 80 miles from entrance to entrance.

Owner Bruce Moroney, 67, explains, “Morning Dove was motoring in no wind and light seas. It was dark and there
was no moon. I was in the cockpit monitoring the chartplotter and radar, which showed no hazards. With no warning we hit something. We could see reef from the cockpit, we were lodged on a reef.”

And this comment from popular vloggers SV Delos: “Scary stuff! It’s tough to see an Amel, just like Delos, that’s been washed onto a reef. In 2010 we sailed this exact same stretch of ocean between Rangiroa and Apataki in the South Pacific. Although it’s rare for things like this to happen, this tragedy really hits home as we prepare mentally for our cruising season that will take us to uncharted areas in the Indian Ocean. Sending love and hugs to the owners of SV Morning Dove!

An admirable sentiment to be sure. We fully understand how awful it must be to lose your boat on a reef, but it is a mistake to let the climate of grief and the fear of appearing unsympathetic distract one from acknowledging the ultimate cause of this type of tragedy. Namely, lack of paper charts.

This was not so much an accident but, like so many others, an avoidable incident caused by the over-reliance on electronics. In the case of Morning Dove, the skipper was also relying on radar which is mysterious as reefs and atolls are usually too low to be visible on radar.

The accident report gives the position of the rescue as 15°25’S 146°42.1’W. If you plot that on one of the mid-magnifications on an electronic chartplotter you will see Figure 1.

As you can see, far from being uncharted, this is the thriving atoll of Arutua: 31 kilometres by 24 kilometres with a healthy population of lobster fishermen and pearl farmers. It even has an airport. It is certainly a long way from being anything like the ‘uncharted’ reef that seems so beloved of journalists.

Now zoom out just one order of magnification and this is what you see. See Figure 2. Nothing. Morning Dove is surrounded by open water. See the problem?

Now would seem a good time to point out that the atoll Morning Dove was wrecked upon is clearly marked on every paper chart of the area, including the large scale admiralty chart of the whole South Pacific. I can even make it out on my second generation $1 photocopy.

Nor is it only neophyte cruising sailors who are falling foul of this. In the recent Volvo 65 Ocean Race, Team Vestas Wind crashed into the Cargados Carajos Shoals in the Indian Ocean, putting the lives of the crew in serious danger.

These shoals are 35 miles long and clearly shown on paper charts, even the large scale United Kingdom chart which encompasses the seas of Indonesia all the way to Africa. Thankfully, the official report into the incident has drawn the right conclusions as to the cause of this disaster when it clearly states that: “the navigator did not use the paper charts carried onboard to check for any dangers that were not apparent on the electronic chart systems.”

Yet I still overhear fellow sailors bandying the expression ‘uncharted reef’ around as if they were strewn all over the ocean like plastic refuse.

The chartplotter screenshot on page 66 shows the opposite situation: the electronic chart indicates that our 36 foot cutter Calypso is sailing over land. She is a great boat admittedly, but not so great that she can nip ashore and pick me up a latte.

The electronic chart manufacturers often get criticised for producing inaccurate charts, but this is not really fair.

It may sound like an easy way out but electronic charts nearly always have ‘not suitable for navigation’ somewhere in the small print. Even Navionics, highly regarded by many sailors in the South Pacific, have the ambiguous phrase, ‘only intended for reference’ in its terms and conditions.

Admittedly, they could make that disclosure more obvious, but it seems fair to point out that not even the manufacturers are recommending that its products are intended as replacements for paper charts. Using a tool for a purpose for which it is not intended certainly puts the responsibility of any repercussions more squarely on the shoulders of the user.

You cannot blame Bunnings if you hit your thumb with one of its hammers; and here lies the root of the problem: electronic charts are so convenient and fun we sailors want them to be something they are not. But wishful thinking is the opposite of good seamanship.

Electronic chartplotters do have some uses. They are good for gauging leeway and drift, for example. If you set your estimated course by compass and plot your position on the paper chart, it might be several hours until your next plot shows that leeway and current have actually set you on a much different course than your estimate and all that ground will have to be made up. An electronic chartplotter shows you immediately where you are heading and you can correct immediately.

Chartplotters can also provide useful information on tides, currents, moon cycles and close-up diagrams of ports and harbours. Just always remember: never completely trust electronic charts. Forget this and you may end up as the subject of the next collision with an ‘uncharted’ reef.

But lack of detail and accuracy on electronic charts is only half the story. Let me take you back to our rich yacht owner with the condescending attitude. We first met him in the Marquesas where he was waiting for a technician to arrive because all of his electronic instruments had been fried when the boat was hit by lightning. While fairly rare, lightning strike is a very real possibility when you are the only object for miles above sea level and you point a metal stick in the air; kind of like golfing in Florida.

If you want to continue to be able to find your way after a lightning strike (or battery fire or electronic meltdown), you will need a compass and some way of fixing your position. On Calypso we have several independent GPS systems, including two that are inside steel boxes, which we then chuck in the oven (another steel box) when we see lightning on the horizon.

If you still feel a little vulnerable then you can pick up a cheap sextant on ebay as a back-up for a couple of hundred dollars and learn how to use it while growing a big bushy beard. We like sextants, but neither of us can grow a decent beard, so we will never be truly expert with them.

So, you have been hit by lightning and all you have left is your hand-held GPS, which you were smart enough to wrap in foil and store in a metal container, or your sextant, which you have prudently learnt to use. Bravo! Take a moment to pat yourself on the back for being better prepared than most boats.

However none of this preparation will do you a scrap of good if you do not have a paper chart to plot your position on.

Without paper charts, GPS coordinates might as well be your lottery numbers. The law no longer requires large commercial vessels to carry paper charts and this has led some sailors to claim and even publish, I am embarrassed to say, that small boat sailors do not need to carry them either. This is nonsense on steroids for two reasons.

Firstly, sailing boats are comparatively vulnerable to relatively small waves finding their way aboard and knocking out the electronics.

Secondly and most importantly, all commercial vessels follow established shipping routes, which are programmed into its computers. It rarely has to deviate due to unfavourable winds and generally do not go off exploring backwaters or picnicking up rivers. On the rare occasions that a ship is forced to deviate from the shipping lane routes, they use a satellite telephone to advise the employers who can check the new route against the latest paper charts.

Us sailors can never predict the actual course we will take because we cannot predict the wind or sea conditions accurately for more than a few days ahead. Furthermore, our routes are infinitely more varied than the average commercial vessel and we do not have a team of marine professionals an iridium phone call away who are keen to protect a multi-million dollar investment.

Being able to plot your position on a paper chart at any time is a matter of safety and the minimum requirement of seamanship.

On the other end of the scale is the crew of the boat Hokulea who we were fortunate enough to meet in Tahiti when they returned from a three year, 60,000 mile circumnavigation. With no sextants, watches, compasses or electronic instruments whatsoever, they relied entirely on traditional Polynesian methods of seamanship that involve celestial navigation, swell direction and hand shapes.

Their seamanship does show the extent of what is achievable without modern gadgets.

For most sailors though, I think it is important not to become polarised by opinion. We do not need to come down on any particular side in the continuing and already well-bloodied debate of traditional seamanship versus modern technology.

By taking the best of traditional seamanship: paper charts, emergency sextant and physical watch-keeping; and combining it with the best of modern technology: electronic chartplotter, several independent GPS systems including one protected from lightning; you should have the safest system available to navigators.

Who could be unhappy about that? ≈