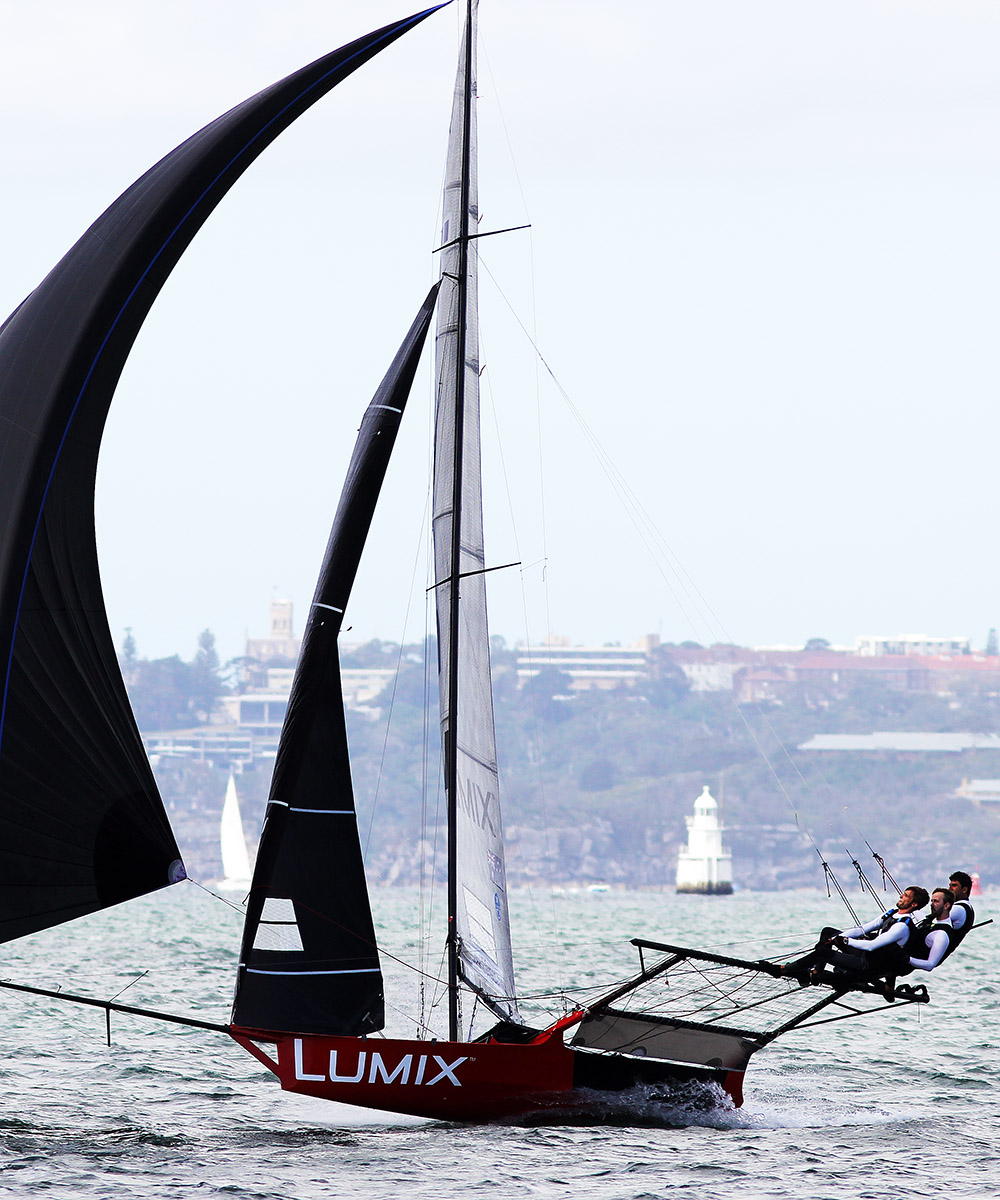 Panasonic Lumix crew drive their skiff to the finish line to take out the Spring Championship. Photo Michael Crittenden.

20/11/2017
The Triple M team won today's race on Sydney Harbour, but it was the Panasonic Lumix team who took out the inaugural Australian 18 Footers League Spring Championship.
Triple M (James Ward, Adam Gillson, Huon Oliver) won today's race by 42s to become the only two-race winner in the seven race championship after another good performance by the crew.
Victory overall came to Panasonic Lumix (Jordan Girdis, Lachlan Doyle, Nathan Edwards) only on the final lap of today's course when the team finished strongly to take third place and an overall victory by just one point.
It was bad luck on both the race and the overall result for Finport Trade Finance (Keagan York, Adam Minter, Greg Dixon) which finished second today and second overall in the championship
The final overall pointscore showed Panasonic Lumix on 23 points, followed by Finport Trade Finance on 24, The Kitchen Maker (Scott Babbage) on 32, Triple M 36, Rag & Famish Hotel (Bryce Edwards) 36 and Smeg (Lee Knapton on 39.
The championship proved an outstanding success with six different winners coming from the seven races.
Once again, the fleet today faced a 10-12knot Easterly breeze which also turned ESE throughout the race. Last week's winner Noakes Youth again grabbed the lead at the first set of windward marks in Rose Bay then narrowly led Triple M and Finport Trade Finance to the wing mark off Clark Island.
At the bottom mark the young team held a 20s lead over Finport and Triple M, followed by a group of chasers led by Panasonic Lumix and Asko Appliances (James Dorron).
Noakes Youth crew were brilliant up the second windward leg to Rose Bay and extended the lead to 1m30s as they headed back downwind to the bottom mark at Kurraba Point.
Most of the spectators were confident the young team would win their second race in two weeks when a bad gybe saw the skiff capsize and a big lead surrendered to Triple M.
Finport's team weren't done and came back to challenge Triple M but the task was going to be tough as Finport had to go to the furthest mark in Rose Bay before the run to the finish.
There have been a number of close finished in the series and today was another.
Triple M's team had to drive their skiff hard to hold off the determined challenge by the luckless Finport Trade Finance team.
Race 1 of the NSW Championship will be sailed next Sunday, 26 November.
The Australian 18 Footers League Spectator Ferry will follow all the racing action.  The ferry leaves Double Bay Public Wharf at 2.15pm.
Frank Quealey
Australian 18 Footers League