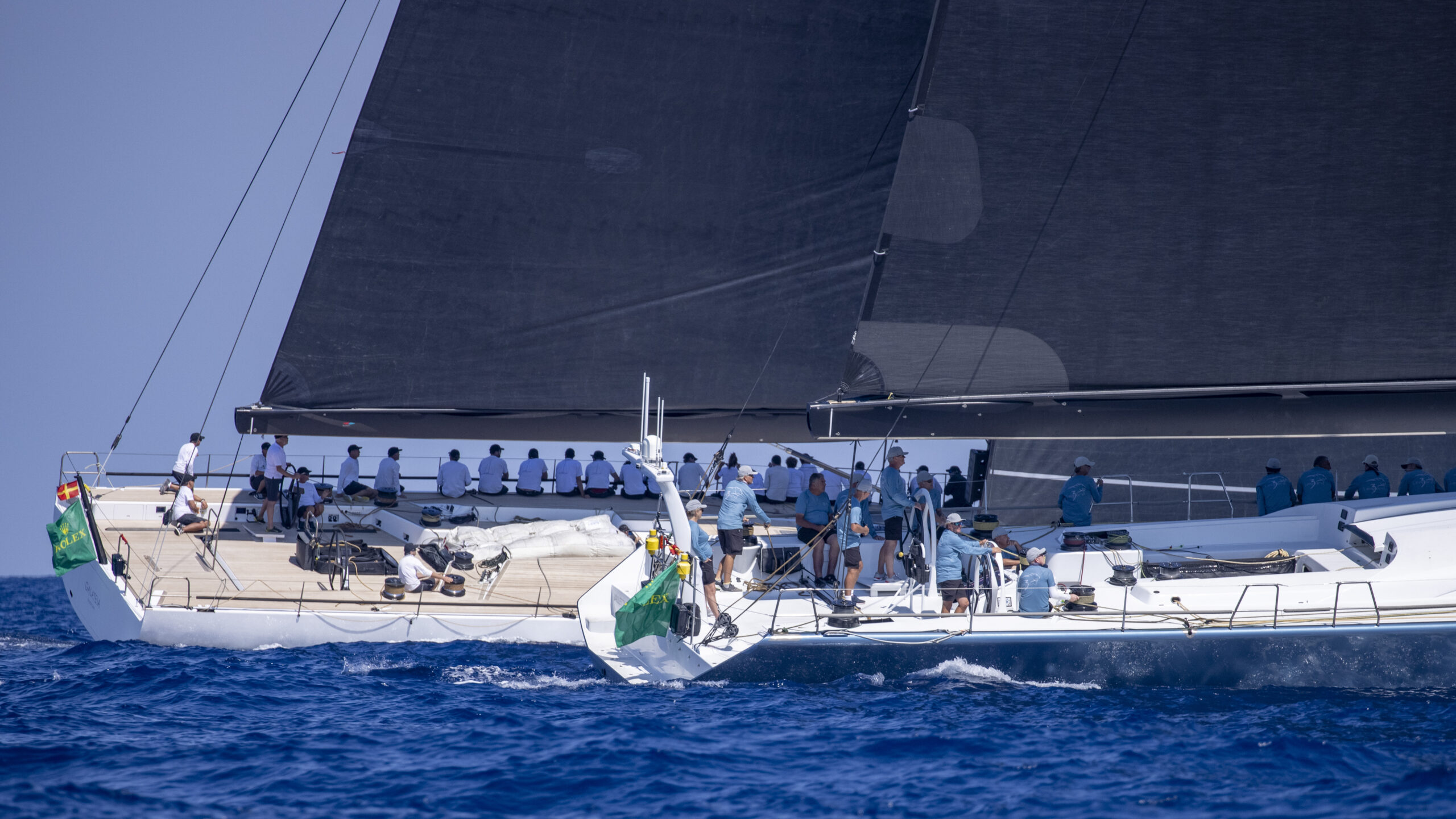 This week’s maxi yacht competition at the Real Club Nautico de Palma’s Palmavela is the strongest for several years, with a seven boat class racing under IRC, the four longest all being around 100ft in length.

Competition takes place over four days from Thursday until Sunday.

Ever since the heyday of the IOR maxis back in the 1980s, Palma has been a popular venue in the maxi racing calendar, with competitors relishing the ideal sailing conditions on the Bay of Palma and along the Majorcan coast. In 2004, the Real Club Nautico de Palma introduced Maxi Race Week as the opening event of the Mediterranean season.

Now known as Palmavela, and with a broader range of one design and handicap classes competing alongside the maxis, the event still maintains its position as first in the International Maxi Association’s annual Mediterranean Maxi Inshore Challenge.

Competition will be especially intense this week with three of the original four Wallycentos entered: the two Reichel-Pugh designs, Sir Lindsay Owen-Jones’ Magic Carpet Cubed and David M Leuschen’s Galateia, lining up with the Judel-Vrolijk design launched as Hamilton, then subsequently lengthened to 107 as Open Season and most recently acquired by 52 Super Series campaigner Jean-Luc Petithuguenin and rechristened Paprec Recyclage. They will be lining up with the Farr 100 Leopard 3 and her enthusiastic Dutch owner, with a veteran crew, many of whom campaigned her alongside original owner Mike Slade.

While these four will enjoy top competition on the water, in with a strong chance under IRC corrected time are several smaller maxis. These include Paul Berger’s Swan 80 Kallima and the sole Spanish maxi competing, Andrés Varela Entercanales’ Vismara Mills 68 Pelotari Project, which last weekend won line honours and her class on corrected time in Palmavela’s offshore race, La Larga. But all eyes will be on Bullitt, the competitive Wally 93 launched in 2018 as Nahita and recently acquired by Andrea Recordati, himself better known as the owner of the Wally 101 Indio.

How will they all fare? The forecast indicates that the seven maxis will get a complete test with a brisk, possibly too brisk, opening day when the northeast wind is forecast to be gusting above 25 knots and slowly backing. Into the northwest, it drops by around five knots on Friday before reverting back to early season sea breeze conditions over the weekend.

Galateia’s Kiwi strategist and helm coach Kelvin Harrap says he is looking forward to the competition. “A few boats have changed hands – like Bullitt and Paprec Recyclage. Then there’s Magic Carpet, us and Leopard – so it is a good fleet. It is going to be competitive. It will be interesting to see how we go rating-wise against the smaller boats who will be able to sail in clear air behind us as we’re battling it out together.”

Aside a few new headsails Galateia remains much the same as it was at the Maxi Yacht Rolex Cup last year, as is the crew including six time America’s Cup winner Murray Jones and with local knowledge coming from Jones’ Spanish former Alinghi teammate and Olympic 470 gold medallist, Jordi Calafat.

Harrap adds that he is looking forward to the test the varied weather conditions look set to provide as well as enjoying this year’s event being a little later and the temperature accordingly warmer.

Surprisingly given that she has raced in literally the four corners of the globe since she was launched in 2007, Leopard 3 has never before competed at Palmavela. “This is our first time here on Leopard, which is exciting with the new owners,” says the 100ft maxi’s perennial skipper Chris Sherlock. “And what a great turnout. Everybody is lifting their game.

“It is going to be interesting with Bullitt out there, which is an unknown quantity, and Paprec – she hasn’t raced properly for a number of years; Magic Carpet Cubed and Galateia are always well sailed. So, several good boats and let’s see how it pans out. It is a [IRC] rating game as well. We have focussed on our rating, but then so has everyone else…”

Thursday’s big conditions should present few problems for Leopard 3, which holds the west to east Transatlantic record for yachts with powered winches. “It could be 25-30 knots on Thursday so we might do a course around the bay,” continues Sherlock. “Saturday and Sunday will be sea breeze-type days, so a good range of conditions for all the boats to show their strengths.”

The race program for the maxis competing at Palmavela comprises two days of coastal races and two of windward-leewards.

For more information on the International Maxi Association visit: www.internationalmaxiassociation.com