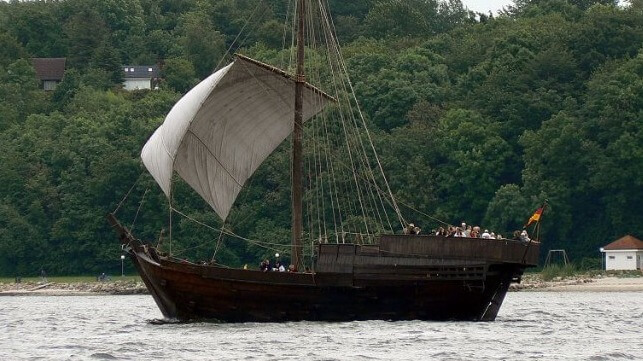 Replica of a Hanseatic cog. Pic - VollwertBIT / CC by SA 2.5

Archaeologists in Tallinn, Estonia have discovered the wreck of a wooden vessel dating back to about 1300 AD, putting it within the timeframe of the famed Hanseatic League.

The 80-foot wreck was found during excavation at a construction site near Tallinn’s harbour, buried about five feet down near what was once the mouth of the Härjapea River. The site on Lootsi Street on Tallinn’s waterfront is home to another, previously discovered buried wreck, so archaeologists were on the lookout for further finds. After excavation, the site will soon be an office building. (Photos are available here).

Though more work will be needed to confirm its origins, the ship may be a Hanseatic cog – a flat-bottomed sailing vessel with a simple sail plan, designed for efficient and economical trading in the Baltic.

For the full story, see: https://www.maritime-executive.com/article/archaeologists-discover-14th-century-wreck-on-tallinn-s-waterfront