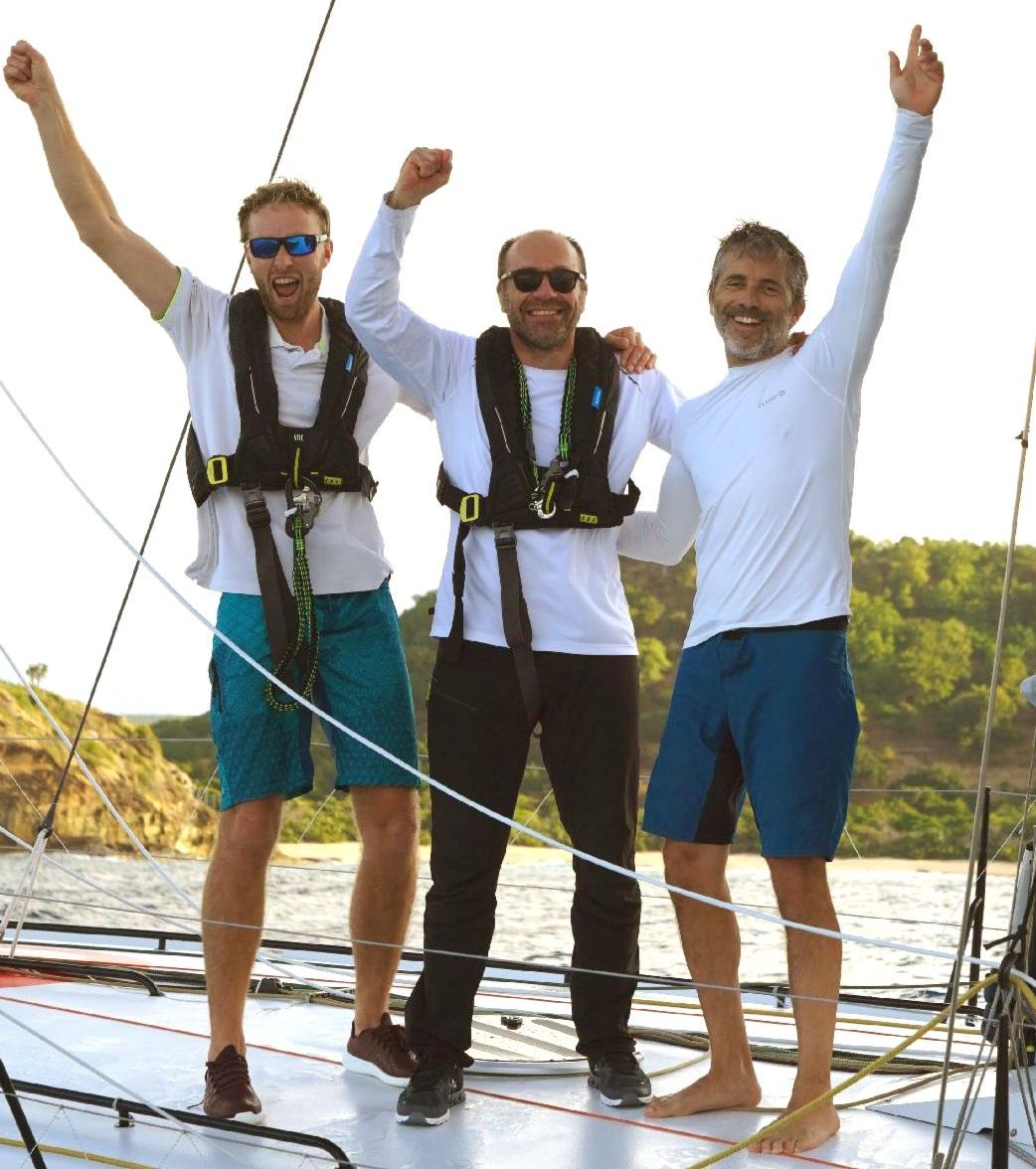 27/01/2021
Congratulations to Olivier Magre and his crew on French Class40 Palanad 3 as the overall winner of the 2021 RORC Transatlantic Race. Palanad 3 has posted the best elapsed time under IRC to win the RORC Transatlantic Race Trophy. Palanad 3 is the seventh winner of the antique sterling silver trophy and the first Class40 to do so. Antoine Carpentier’s Class40 Redman, also a Mach 40.4, was second overall under IRC.
“I am so happy to have won overall; it is a magnificent trophy!” smiled Olivier Magre. “This is a perfect race for Class40 because it is relatively shorter than other transatlantic races and the timing is perfect to join other events such as the RORC Caribbean 600. I am sure that in the future if we have a number of Class40s it would be a beautiful race and we have the added attraction of challenging bigger boats as well. I think mixing Class40s with other boats under IRC is a good thing because it increases the challenge and the performance required.”
Oren Nataf racing his Monegasque Multi50 Trimaran Rayon Vert, skippered by Alex Pella, took Multihull Line Honours in an elapsed time of 9 days, 3 hours, 33 mins and 19 secs. This was Oren’s second Transatlantic Race with Pella as skipper. The first race was much slower in his classic Olin Stephens’ designed Stiren.
“Rayon Vert is a very comfortable boat and we had fantastic racing conditions,” commented Oren. “However, at such a fast pace, you have to be very careful as everything is under so much more tension. Racing at such high speed is something I will always remember – it is addictive. Racing faster than a motorboat, day after day, night after night and most of the time alone – it is a huge experience.”
Johannes Schwarz’s Volvo 70 Green Dragon took Monohull Line Honours in an elapsed time of 9 days, 18 hours, 53 mins and 40 secs winning the International Maxi Association’s IMA Trophy.
“It is an honour to win the IMA Trophy, as so many famous boats have done, but to finish the race in such a fast time is incredible. Although we finished in Antigua and not Grenada, the route we took was to the south, so there is not much difference in the miles we have raced,” commented Green Dragon’s Johannes Schwarz.
Third overall under IRC was Sebastien Saulnier’s Sun Fast 3300 Moshimoshi. Racing with Christophe Affolter, Moshimoshi was the first team to finish the race in IRC Two-Handed.
“The first night was the most difficult with big waves and strong wind; we got a big gust and broached,” explained Sebastien Saulnier. “Christophe was down to leeward and there was so much water that his lifejacket inflated! The rough conditions continued for the second day, but after that we got into the rhythm. We averaged over 8 knots for the race, which is quick for a small boat! Christophe and I are very proud that we have finished the race. I want to say a big thank you to the RORC for their organisation.”
Benedikt Clauberg’s Swiss First 47.7 Kali finished the race for the third year in a row, smashing their own personal race record by two days (Elapsed time: 16 days, 7 hrs, 12 mins and 27 secs). The Swiss, Swedish and Finnish crew sent blogs from the Atlantic about life on the racecourse:
“The biggest challenge is always just to get to the start line and this year the whole Corona situation really hammered that home – in fact two of the crew had been ill in the past with the virus,” commented Benedikt. “But although the challenges have been immense, this was still about racing as a team across the Atlantic. Thank you to the RORC for organising the race and especially for the two cases of beer on arrival. Like a drip onto a hot stone, the beer didn’t last long, but the memory will last forever!”
Due to travel restrictions from the UK, the Royal Ocean Racing Club managed the race remotely, relying on the expert abilities of the Calero Marinas’ team and the race officers of Real Club Náutico de Arrecife in Lanzarote. In Antigua, Terry O’Brien was employed as shipping agent. Greeting every team on arrival, the RORC was represented by Helen Spooner who has organised the famous greetings for every edition of the RORC Caribbean 600.
“A special thank you must go to JJ Calero and all the staff at Calero Marinas. We could not have put on this race without their tremendous support,” commented RORC Race Manager Chris Stone. “As with every RORC race, the fleet is monitored by the RORC team and we will continue to monitor the progress of Tim Knight’s Kai, which is still racing. Helen is doing a terrific job welcoming teams into Antigua, even providing a cooler of beer if a boat arrived during the night-time curfew.”
The 8th edition of the RORC Transatlantic Race is scheduled to start from Marina Puerto Calero, Lanzarote on Saturday 8th January 2022 and finish at Camper and Nicholsons Port Louis Marina, Grenada. For more information: www.rorctransatlantic.rorc.org
– Louay Habib