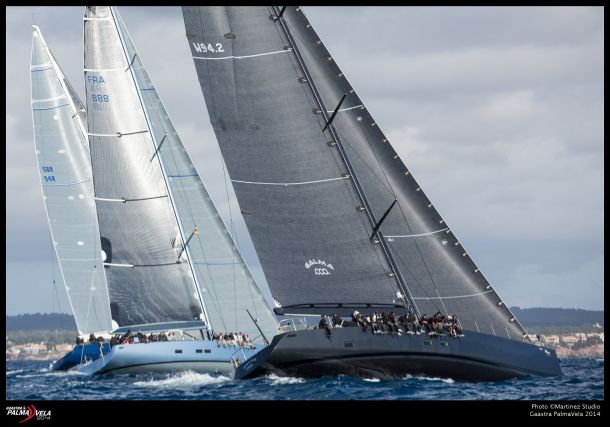 Palma de Mallorca, 23rd April 2015: Since its creation in 1994, the Wally design has managed to situate itself at the very top of an extremely demanding sector, whose owners strive for a difficult balance between the greatest standards of quality, luxury, style and the very forefront of avant-garde technology. These mighty boats can both compete at a top level with a full crew and be sailed single-handedly with electronic steering. At Gaastra PalmaVela 2015, the Wally class boasts a fleet of nine of these true gems of naval engineering, from five different nationalities and with LOAs ranging between 24 and 32.6 metres.

The rival to beat out on the water in Palma is unquestionably Sir Lindsay Owen-Jones’ Magic Carpet 3, skippered by Danny Gallichan. The spectacular Wallycento won last year’s Gaastra PalmaVela with three out of six victories and is also the defender of the Wally circuit title having won three out of four events in the 2014 season.

Thomas Bscher’s magnificent Open Season (formerly Wallycento Hamilton) returned to the water at the beginning of April having undergone a complete refit with an important increase in boat length (from 30.5 to 32.6 metres) and draught (6.2 to 7 metres). Skipper Mike Atkinson is responsible for making the début with the newly-reinforced Open Season and the goal of bettering last year’s fourth place at PalmaVela 2014.

With little over 24 metres LOA the J One skippered by Piers Richardson, is one of the smallest boats in the Wally fleet, but already proved last year that she could be a serious challenger to the title, having swept a third place on the podium at PalmaVela.

The German Wally 100.3 Y3K, owned and skippered by Claus-Peter Offen, was not in Palma in 2014, but proved their potential with a third place at the Wally circuit regatta held in Porto Cervo, finishing behind Magic Carpet 3 and J One.

The other boat registered with an LOA of over 30 metres that is competing for the title is the  Wally 107 Kenora, skippered by Tom Edwards. Completing the line-up of contenders are Alberto Palatchi’s Wally 94 Galma from Spain, and three Wally 80s: Fred Houghton’s Nahita, from the British Virgin Islands, Olivier Lozachmeur’s Ryokan2 from France, and Marc Pajot’s Tango G from Great Britain.

Gaastra PalmaVela, organised by the Real Club Náutico de Palma, is the first of four scoring regattas in the Wally circuit 2015, which will also include events in Menorca (May), Porto Cervo (September) and Saint-Tropez (September-October). The event is also part of the IMA (International Maxi Association) circuit 2015, and is the Copa de España for Adapted Sailing for the Hansa 303, Hansa 303 Double and 2.4 classes.

The competition programme for Gaastra PalmaVela 2015 will include four days of both coastal and windward/leeward races. The first scoring event is programmed for 12.00h on Thursday 30th April.

The prize-giving ceremony will be held on Sunday 3rd May.