The Northern Advocate. By Imran Ali.

A yachtie is helpless to stop opportunist thieves helping themselves to prized possession on board his stricken yacht – 11 days after it ran aground off Ruakaka on New Zealand's north east coast.

Geoff Phillips, 77, owner of P.Lee Can, has decided not to lodge a complaint with police as the yacht lay exposed in the middle of the beach which made it impossible to guard it all the time.

Several people have reported seeing people stealing items from the yacht and Mr Philips confirmed some items had gone missing from the stricken vessel. Under international law a stranded vessel was not fair game, but belonged to the owner or insurer and removing items was theft.

The yacht came too close to shore and ran aground in low tide on December 26, 2015 while Mr Phillips attempted to help his wife Ayla, who was in a dinghy a little closer to shore. He said locals have told him people had been coming down to the yacht at night and stealing items.

Among stuff stolen were solar panels but Mr Phillips believes neither he nor police can do much about the thieving. 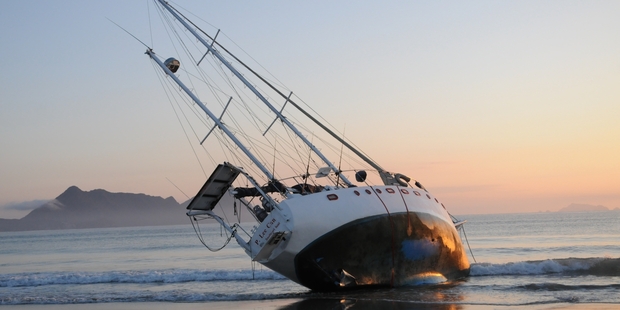