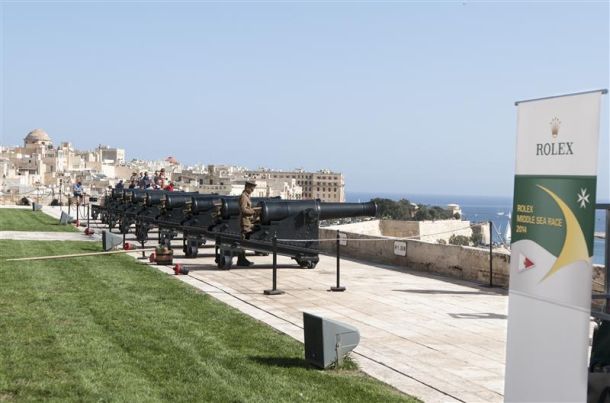 With less than three weeks until the start of the 36th Rolex Middle Sea Race on Saturday, 17 October, over 100 teams from 22 nations are preparing for another historic edition of the most important offshore race in the Mediterranean. The race will take off from Grand Harbour, with the international fleet crossing the starting line at the sound of the Saluting Battery cannons.

The Rolex Middle Sea Race is the final event of the Mediterranean yachting season. Since its inception in 1968, it has positioned Malta on the international offshore racing map that includes exclusive races such as the Rolex Sydney Hobart Yacht Race in the Pacific and the Rolex Fastnet Race in the North Atlantic.

The 606-nautical-mile course circumnavigates Sicily anticlockwise, starting and finishing in Malta. Professional and Corinthian sailors consider it one of the most beautiful and varied races in the world, and while navigators agree, they would add that it is also one of the toughest and most demanding. Steeped in mythology and history, the Rolex Middle Sea Race starts in the spectacular amphitheatre of Valletta’s Grand Harbour, then heads North to the Strait of Messina leaving Sicily to port, and continues, passing the active volcano of Stromboli followed by the Aeolian and Egadi islands, then Pantelleria and Lampedusa, before returning through the South Comino Channel and the final stretch to the finish, off the Royal Malta Yacht Club.

In the battle for the overall win, the race is as open as ever. Defending champion and local hero Artie will try and repeat her historic achievement, but over 100 opponents face the challenge with the same objective.

Three renowned multihulls, MOD70s Musandam-Oman Sail and Phaedo3, as well as Nigel Irens’ 63 Parado are expected to lead the fleet around the racecourse. In the meantime, George David’s Rambler, the American record holder, will be aiming for the prestigious line honours victory among the fleet of monohulls.

Back in 2007, George David’s 90ft maxi Rambler took the triple crown in the Rolex Middle Sea Race, with an overall victory, line honours and racecourse record, completing the race in 47 hours, 55 minutes and 3 seconds.  None of the 583 participating yachts since then have been able to beat this record, including four time line honours winner Esimit Europa 2 (SLO), whose best time was set in 2010, yet was seven hours slower than Rambler’s. In 2009, Mike Slade’s ICAP Leopard (GBR) finished 24 minutes and 30 seconds off record pace. Rambler is the only yacht that has ever finished the race in less than two days.

Eight years later, George David returns with a new weapon: his 88ft Juan Kouyoumdjian designed Rambler 88, a canting keeled rocket ship launched in 2014 that showed her potential, finishing second both in the New York Yacht Club Transatlantic Race in July and the Rolex Fastnet Race in August, just behind Jim Clark’s powerful 100ft Comanche (USA). The line honours victory and the perspective of setting a new course record, weather permitting, are two of Rambler’s goals this year for the Rolex Middle Sea Race.