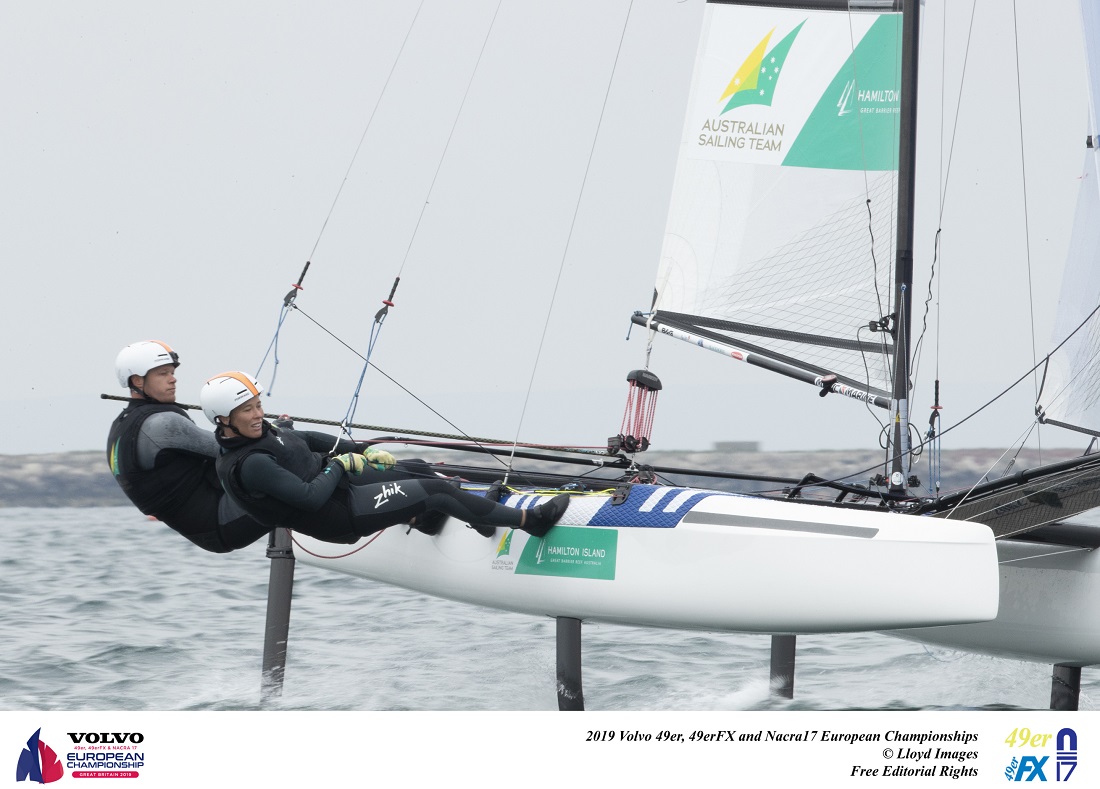 The weather gods were smiling down on some of the Australian Sailing Team (AST) at the 49er, 49erFX and Nacra 17 European Championships in Weymouth, where light breezes and flat seas made the difference for some, including to Nathan and Haylee Outteridge who have booked their place in the Nacra 17 Medal Race.

Conditions were heaven sent, propelling the Outteridges up into 10th place after they scored fourth and fifth places in the final races of the series before the Medal Race for the top ten in each class. They are not in a position to medal, but are pleased to be where they are.

The two have been struggling downwind in the windier, wavier conditions Portsmouth Harbour in the UK has been delivering for most of the week, so the odd light day has been a boon, giving them the opportunity to make up lost ground.

Nathan Outteridge explains: “It’s lack of time in training in those conditions. In the later part of the regatta it’s been lighter, which worked for us. Haylee and I have been talking about what we’ll do; whether we’ll go and do some offshore training in Sydney or similar.

“It’s frustrating, but we will have time for training at beginning of June and late July. I think our sailing skills are better than last year. We’ve found our weaknesses; better to find them now rather than later,” he said.

Skippering a variety of foiling boats, expectations are that Outteridge would feel at home on a Nacra. He arrived direct from his SailGP skipper role in San Francisco to Weymouth.

Outteridge, a 49er Olympic gold and silver medallist explains: “The Nacra isn’t really foiling sailing, it’s catamaran sailing. They foil, but not upwind, they are a catamaran then. A lot of the experience I have from the Moth or AC boats, it’s not the same with the Nacra, unless it’s flat water, like it’s been here for the last couple of days.”

“And yes, it is hard to get my mind around the different boats I sail. The Nacra is small team; SailGP is skippering and managing the whole team. It was difficult to come from that to this event. Hopefully we’ll get more time to sail between the next events. The boat’s brand new, so it’s not quite sorted yet.

Victorian brothers Will and Sam Phillips also seized the day and are in good shape to make the 49er Medal Race in their current position of seventh overall: “We’re not certain, but we may have one more race before the Medal Race tomorrow. “The weather’s meant to be light again, so we’re looking to move up in the standings, that’s the plan,” Sam Phillips said.

The brothers started with an 11th place, finished third in the next race and won the last race of the day.

“We got out to the right side of the course in the last race. There was good wind there and not too many others had the same idea, so that worked for us. We had a maximum of 7 knots and there were a few holes on the course. You just had to try and avoid them. It was a matter of trying to stay in pressure and manage to stay in a good lane,” Phillips said.

Racing was supposed to start at 11am in each of the Gold fleets, but it was too light and fickle, so was postponed twice and eventually started with the 49erFX class. The Australian Sailing Squad’s Tess Lloyd and Jaime Ryan sailed well to score a pair of ninth places for 11th overall, coming tantalisingly close to making the Medal Race.

“That was it, no more racing. We are pleased with our regatta, though obviously we’d have liked to make top ten. We’ve been working on specific things, and as a new team, we’re getting closer and closer to our goal. We had a capsize early in the series, and another bad result, but we have just gone up and up,” Lloyd said.

Describing the first race of the day when they chose to start at the not so favoured pin end of the line. “It was very light, but we saw a pressure line and made up places on the next upwind,” said Lloyd who now has two weeks off and will meet Ryan back in Sydney for a six-week training block “before going to Japan to compete,” she said.

Team mates Natasha Bryant and Annie Wilmot had an up and down day. They scored eighth in the first race, only to drop to 20th in Race 17, remaining 13th overall. Rounding out the Australian trio of 49erFX teams, Amelia Stabback and Caitlin Elks retained their 24th overall after 28th and fourth placings.

Two races were held for the 49er Silver fleet. Thomas Needham and Joel Turner scored a win and a sixth place to move up to 30th overall. David and Lachy Gilmour finished fourth and 25th to remain 37th overall, Jim Colley and Shaun Connor dropped to 38th, while Kurt Hansen and Simon Hoffman held onto 42nd place.

Racing resumes from 10am Sunday local time (weather permitting). The Medal Races are due to start at 1pm.

The Australian Sailing Squad in Weymouth is facing the world’s best as they campaign towards selection to the 2020 Tokyo Olympic Games.