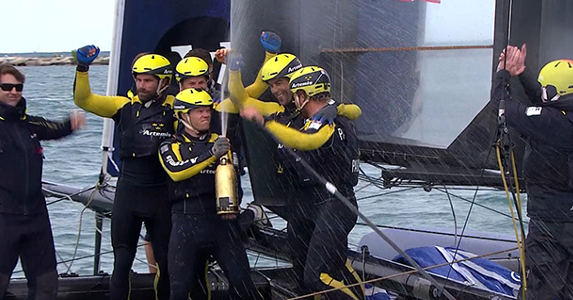 Nathan Outteridge and crew celebrate their win at the ACWS Chicago. Photo ACEA.

In front of sold-out grandstands, the six America’s Cup teams fought fiercely for the double points on offer for each of Sunday’s three races.

In race two, the first of Sunday’s action on the water, Land Rover BAR took the honors after a very strong start, putting more air between them and the pack at the first mark and then leading from the front throughout the rest of the race.

Race three started with Groupama Team France first across the start line, but Artemis Racing continued their strong weekend form and grabbed the lead early and, despite pressure from ORACLE TEAM USA right to the end, crossed the finish line first for the second time over the Chicago weekend. The second place finish would be a high point for the home team.

Race four, the last competitive action of the weekend, began with five of the six teams crossing the start line together, but after a slew of penalties were handed out to a number of boats after the first mark, it was SoftBank Team Japan who were in clear air and would lead the pack though to the finish, recording their second race win of the weekend.

“I’m absolutely thrilled with the performance of our team here,” said SoftBank Team Japan skipper Dean Barker. “We had some fantastic results on the practice day and today, and even though we were a little bit disappointed with our starts in the first two races, the guys did a great job battling back to win the last race, and we’re just all really happy. It’s a great boost for our team and it’s really good to see that all the hard work we are doing is paying off, especially in front of such a great crowd.”

It was a day of incredible action for the crowds who came out in force all weekend to see the first America’s Cup racing on Lake Michigan. Over 200,000 fans were on Navy Pier over the course of the three day event, including close to 40,000 through a sold-out race village. On the water, the race course was tightly surrounded by a spectator fleet pushing 1,000 boats.

“To be honest I’m a bit relieved!” said Artemis Racing skipper Nathan Outteridge. “We finally had a very good day of weather and our team rose to the occasion. We recorded nothing worse than a fourth all week, and we said at the start of the week that finishing top three in every race would be good enough to win, and we did just that.

“The champagne at the end tasted very sweet. I quite like champagne, especially the Moet that was given to us, and when you get to spray a huge bottle of Moet over all your teammates when you’ve won, that’s a very special feeling.”

“As a team we are happy with second place” said Land Rover BAR skipper Ben Ainslie. “We would have liked to have the win, but Artemis Racing sailed very well today. Despite that, it was great to be able to showcase what this sport is all about, in a venue like this and with the sort of conditions we had today here at Navy Pier. It really was an amazing day for the whole sport, and I’m delighted with how well this weekend has gone overall.”

“It was sensational racing today and to come away with our overall lead still intact is fantastic,” said skipper Glenn Ashby. What we take out of this weekend is what a fantastic regatta this has been. I don’t know exactly how many people were out there watching us, but I am sure they will all have had a really good show.”

ORACLE TEAM USA skipper Jimmy Spithill agreed. Despite being disappointed with a fifth place finish, he was pumped up by the response of the fans.

“It was unreal here,” he said. Let’s hope this becomes a regular stop on the series. The race course is awesome. All weekend we saw the huge crowds and we all had great support. I hope we’re coming back.”

Similar sentiments came from Groupama Team France skipper Franck Cammas, who struggled to stay with the leaders all weekend, but was quick to credit the support of the fans on Navy Pier.

“This weekend has been good for the sport,” Cammas said. “The venue was great. Today we had really good winds and big crowds and we have been made very welcome in Chicago. We have all enjoyed this event, but now we must look ahead to Portsmouth and improving our performance there.”

Next up it is back to the UK for the Louis Vuitton America’s Cup World Series Portsmouth on July 23-24.