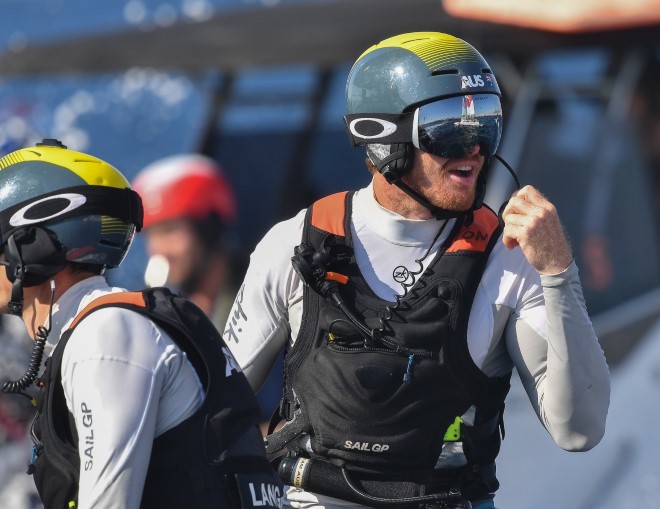 The two helmsmen traded wins ahead of the four other national teams to secure their places in the title race of the season.

Following another day of fleet racing, the Australian and Japanese SailGP teams will be facing-off on Sunday for the most substantial monetary prizes in the sport, US$1 million.

Marseille witnessed the most competitive racing in the season so far. Massive crowds lining the sea wall had a front-row seat to action; featuring the supercharged flying F50s representing six nations. Deafening cheers erupted from local fans as Billy Besson as his French SailGP accelerated crossed the start line first in the opening race of the day.

“Not that I have made an entrance in full stadiums many times in my life, but I think that comes pretty close,” Besson said.

Outteridge’s fans also had a reason to celebrate. The Japan SailGP Team came out fighting to beat long-time friend and rival, Slingsby and the Australian team, winning races one and three. He showed an aggressive side that has not been witnessed this first season.

Outteridge is known for his tactical superiority in tough and shifting conditions like those seen during racing today. The Australian, skippering for Japan, pulled out several moves to keep Slingsby and the Australians behind.

“We know we are preparing for the match race and there is a match race within the fleet race,” Outteridge said.

“We’ll take any opportunity to practice our match racing skills as much as possible, and you saw that today. We wanted to slow the Aussies up today and put some boats between them and us to help our points. I will do more of that tomorrow, but I think Tom will come out more aggressive too.”

Inflamed by race one’s outcome in which Outteridge held Slingsby back at the start, the Australian team came back for a spectacular win in race two, coming from behind to get the better of the Japanese team.

“Knowing him as well as I do, I didn’t think he would be that aggressive,” Slingsby said. “We weren’t expecting it in all honesty; I thought he was going to race his own race, but good on him, he caught us a bit by surprise.”

While the two boats in the championship match race looked pre-set going into the opening day, the race for the remaining podium spot was far from determined.

A stand-out performance came from both Great Britain and China SailGP teams. After not finishing races in New York and Cowes, Dylan Fletcher’s Great Britain SailGP Team wanted to see the season out in style and recorded three podium positions to move up into third place overall and increase the gap from the China and United States teams.

There was drama for Rome Kirby’s young American team and his crew retired from racing due to technical issues with a foil. The team was able to return for race three, but the lack of race practice from earlier in the day saw them finish sixth.

As the overall SailGP Season 1 leaderboard stands, Australia has 197 points, leading Japan by a five-point margin. The British team has established a firm dominance on the podium with 145 points over the, now tied United States and China teams, which both have 137 points.

Fans are guaranteed high action and high drama when Outteridge and Slingsby come out fighting in the ultimate winner-takes-all match race for Thomas Lyte-designed SailGP Championship trophy and $1 million purse.