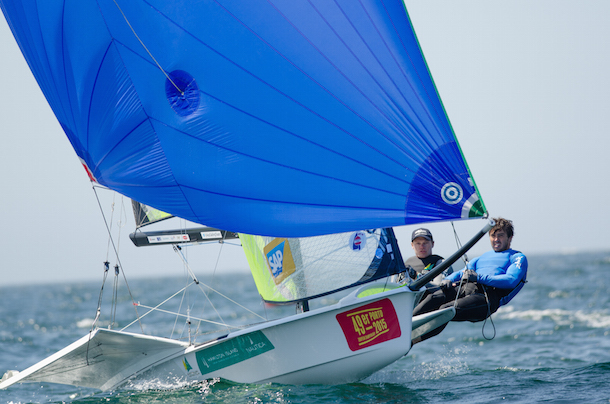 There’s one day to go in the men’s 49er event, and Pete Burling and Blair Tuke have been knocked off the top of the leaderboard after a protest by their arch rivals Nathan Outteridge and Iain Jensen. The finishing order at the end of racing was Burling 1st, Outteridge 2nd and Pink/Bithell in 3rd overall. After Outteridge’s successful protest against the Kiwis and the Brits, the new top three is Outteridge 1st, with Poland’s Tomasz Januszewski and Jacek Nowak in 2nd, and Burling relegated to 3rd overall. The Brits have been knocked down to 8th overall.

The tide of this regatta seems to be turning against the Kiwis, who made hard work of the starts and scored 12,9,21 while the chasing Aussies banked a much more useful 4,4,9. Best performers of the day were Justus Schmidt and Max Boehme, with the young Germans improving throughout the three races with a 7,5,1 score. “We started on port tack underneath the starboard tackers so we could get out to the right early,” said Schmidt, who had seen his team mates and rivals for Olympic selection, Erik Heil and Thomas Ploessel, pull off a similar unconventional start to win the first race of the day.

Schmidt’s consistency elevates him to 6th overall and within striking distance of the podium. Behind the Kiwi leaders, Outteridge is 2nd overall on 70 points, and Great Britain’s John Pink and Stu Bithell in 3rd overall on 72 points. All three top teams were in for a late evening with a flurry of protests against each other.

Everything is up for grabs on Sunday with three Gold Fleet races yet to take place, followed by another Douro River Medal Race. The forecast is for medium airs, and you can watch all the action on the live TV broadcast which is scheduled for the start of racing on Sunday at 1025am local time. Tune in and watch the drama on49er.org.

Giulia Conti and Francesca Clapcich high-fived and hugged as they crossed the finish line of a wild and whacky Medal Race to win the 49er FX European Championships in Porto.

After three Gold Fleet races for the top 25 boats out on the open ocean, the top 10 qualified for the Medal Race a few hours later on the River Douro. It was a big contrast from the steady 10-knot breezes earlier in the day. Strong current flowing upwind, and massive gusts and wind holes combined with wildly shifting breeze made for thrilling spectating but heart-stopping competition for the sailors.

The Italian team of Conti and Clapcich went into the final race in 4th overall, behind the Dutch in the lead and two Danish teams in 2nd and 3rd. Just behind the Italians were the reigning European Champions in 5th overall, another Danish team – Ida Nielsen and Marie Olsen – who still had an outside shot at securing their third European crown.

Off the start line it immediately became apparent that luck was going to be as important as skill, and Annemiek Bekkering and Annette Duetz never found a lucky break. The Dutch were always playing catch-up and could do little as the hopes of a European title slipped away. While early regatta leaders Victoria Jurczok and Anika Lorenz took the lead at the front, the battle for the medals hung in the balance with a tense game of snakes and ladders with all the gusts and wind holes.

Conti and Clapcich held on for 3rd place across the finish line, one place ahead of Jena Hansen and Katja Iversen. They were tied on 57 points, but the Italians’ better finishing position gave them the title by a whisker. Hansen/Iversen took silver with their Danish training partners, Maiken and Anne-Julie Schütt in bronze. The Dutch missed out on a medal by just 2 points.