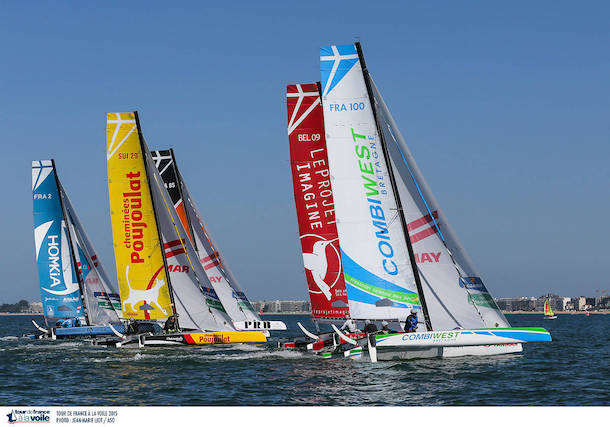 They are still the Tour’s leader, but today they gave the way to others teams. Groupama did not snatch any race victory and finished third after five races. They had consistent result and end the day on equal points with first and second, CombiWest and Vannes Agglo, but the competition is tough in the 2015 Tour de France à la Voile.

Two wins and a second place in five races were enough for CombiWest to be the top team of this day of Stadium Races in Act 3. Fred Guilmin and his crew were not intimidated by Groupama’s domination in the last few days.  “It’s our first victory and I hope it’s the first of a long series,” said the skipper. “We’ve been looking for it for a while and now we have to maintain our position. Groupama was dominating until now, but today we managed to keep up with them. Living in La Baule, I know the race course very well. I know where the wind goes, where we can be faster. It was hot onboard today, looking for puffs. Honnestly, in this kind of weather, there is a part of luck.”

The breeze was light and shifty this afternoon in Pornichet, and the crew had to work hard to follow the wind moves. And Corinthian team Vannes Agglo did really well today. They snatched one race victory and finished the day on equal points with CombiWest and Groupama. “It’s been a great day, although it was more tricky than yesterday,” said co-skipper Quentin Delapierre. “It was not easy mentaly, but we stayed ahead. We could have won the last race but we got a penalty. Nevermind, we were consistant. We have to be very careful because everything can change on the last tack.”

Anyone can win a race in the Tour, and that’s what ski champion Aurélien Ducroz did today. Skipper of La France du Nord au Sud took his team to win the Gold fleet Finals in front of the top sailing names. “What a tough day! A whole day on the water scratching our heads because one time, it pays off inshore, the next it works better offshore. It was tough to get to the finals. We had to fight hard. And once we got there, we had no pressure on, so we took a risk and it paid off. The boat goes well in light wind. It’s great to end the day with a victory, in front of the best teams of the fleet. But when we see how consistent CombiWest, PRB or Groupama are, we know we are not there yet. But it’s still nice to go and play with them”

It was also a great day for Team OZ. Although the only non-french team of the fleet has not won a race yet, their results just keep improving. They finish the day in 16th position, and second of Silver fleet. “It was a beautiful day on the water, a lot warmer, which suited us,” said skipper Rod Waterhouse. “We just learn the boat bit by bit and he seems to go faster and faster. We are getting more comfortable with our moves. We are not behind everybody but right in the middle, so we are happy with that. The changes are very fine, but things like rig tension, sail shape… It sounds very basic, but it’s very fine and we are learning. We are just finding out that these fine setting make the difference. We’ve learned the hard way but we are improving. We now definitely want to make the Gold Fleet and we got very close today, but our starts are not the best and once again we haven’t had enough practice with these boats so we are very conservative and don’t want to make a mess of anybody else. I think as the regatta progress we’ll start making better starts, and you will see us, hopefully, keep moving up the leaderboard!”

Tomorrow the Tour will be in Roscoff, north Britanny for Act 4.