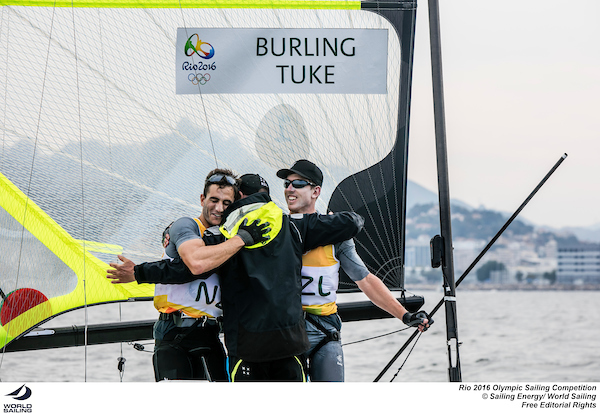 The Kiwis celebrate their Gold medal with their coach. Photo Sailing Energy/World Sailing.

No-one could deny that the best crew won the 49er Gold medal at Rio 2016. Peter Burling and Blair Tuke (NZL) had won every major event since they finished second to Nathan Outteridge and Iain Jensen (AUS) at London 2012.

They carried that form into these Games and after 12 qualifying races had Gold in their pockets with an amazing 34 point lead over second-placed Erik Heil and Thomas Ploessel (GER). The Australians were three points further back, needing to put another boat between them and the Germans to take Silver.

Germany was in strife from the start, getting caught at the boat end and allowing Australia to escape towards the left-hand side. The British team was flagged by the jury and did a penalty turn, but that didn't help the Germans. Australia held the windward position and had them under control, but still needed another boat to get in between them.

At the top mark The Kiwis made it clear they intended to win in style, rounding ahead of France and Spain. At the back of the pack all was good for Australia, with Outteridge and Jensen in eighth, Great Britain in ninth and Germany last.

By the bottom gate Outteridge had put Poland between the Aussie boat and the Germans as well, giving him a one boat cushion. It was a hairy rounding, when he dipped his back in the water and just held on, but Outteridge was establishing control.

There was a massive split on the second beat, with Germany and Poland both going troppo, but when they all came back together Australia still had the required boats in place. The British had escaped but Australia was sixth with Agentina and Poland between them and the ninth-placed Germans.

Outteridge moved up to fifth ahead of GBR but then the Brits, who had helped them early, capsized on the mark and Germany swept past. But Ireland had now put herself between the Aussies and the Germans. Out in front Burling and Tuke increased their lead.

The Germans tried a Hail Mary. They sailed almost on to the beach where the spectators were being treated to another classic race, hoping to pick up a freak shift. It didn't appear and now they were ninth with the Aussies in fifth.

As Burling and Tuke swept across the finish with their arms in the air and stacked their boat with a spectacular stern-first swamping, Australia finished fourth behind France and Denmark to take the Silver. Germany finished eighth to take a well-earned Bronze.

“It's been a quick four years for Blair and myself,” said Peter Burling. “To put everything on the line and for it all to come together like it has is an absolutely amazing feeling. I'm sure it's going to sink in a bit over the next few days.”

The Aussies were philosophical about losing their title and proud of the way they went about winning Silver.

“We delivered,” said Nathan Outteridge. “It was stressful as I'm sure everyone saw. We held our nerve and ground our way back into the fleet, and even though the Germans were in last for a lot of it we knew that they'll pass boats so we've got to keep passing boats. We just kept our head down and did that and kept the race in our control.
“I think there was always that moment in our heads where it could slip out of our control, and to be honest on that course, nothing's in your control. But probably 30 seconds out of the start, when we were ahead of the two guys we needed to beat, relaxed the nerves a bit, and then it was going about three tricky laps of that course.”
And will they go to Tokyo and try to win their title back? “It's too early to make a call right now. We've got a week back in Australia to celebrate the Olympic four weeks that it's been, then it's back to work with Artemis for the America's Cup and then we'll see how it goes.”