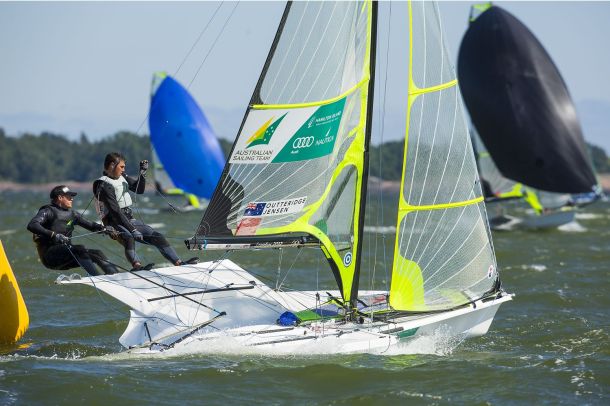 Twenty knot winds – gusting to 25 – made for a tough but exhilarating end to the qualifying phase of the Seiko 49er and 49erFX European Championship in Helsinki today. France’s Manu Dyen and Stephane Christidis hammered home scores of 1,2,1,2 to take the lead in the 83-boat men’s 49er fleet, while Martine Grael and Kahena Kunze lead the women’s 51-strong 49erFX division.

While the top bunch in each fleet were racing tooth and nail, for many it was a day of survival, of getting round in once piece. In some unfortunate cases, it was a day of injury and breakage. Italy’s Francesca Clapcich has been forced to pull out of the 49erFX competition after severely damaging the ligaments in one ankle when she fell from the wing into the mainsail during a capsize. Great Britain’s Chris Grube has suffered a repeat of a back injury which has now forced him and 2007 World Champion Stevie Morrison out of the regatta.

For others, today was a shot at redemption after a poor opening to the regatta. It was a critical day for Dylan Fletcher and Alain Sign, the defending European Champions, who looked like their regatta was over after smashing into a rock on the first beat of the first race of the competition.

Sitting behind the Brits in 3rd place overall are the Austrians, Nico delle Karth and Nicolaus Resch, with early series leaders from Italy, Giuseppi Angilella and Pietro Zucchetti down to 4th overall, just ahead of the reigning World Champions from New Zealand, Pete Burling and Blair Tuke. It’s a measure of today’s tough conditions that even the usually impeccable Kiwis capsized three times.

Reigning Olympic Champions Nathan Outteridge and Iain Jensen bounced back from a lacklustre start with some outstanding results in the strong, gusty and shifty wind. The Aussies needed to shake off a disqualification from day one, when they finished a race in first place but heard no winner’s gun after having crossed the start line too soon.

“Yeah, today was better – we started behind the line today,” was Jensen’s wry comment, after clocking up three 1st places and a 3rd in their qualifying division. The most satisfying score was the race they won after lying in 15th at the first mark, according to Outteridge.

“We picked off a few that were capsized, and then we did a gybe set in strong pressure on the right-hand side, and took a lot of ground. A few guys hit a rock that we managed to avoid, and we got our way to the front.”

In the 49erFX, Martine Grael and Kahena Kunze didn’t win any races but still did enough to hold a slim one-point advantage at the top of the leaderboard ahead of Denmark’s Ida Marie Nielsen and Marie Olsen. The Danes started on port tack all day, looking for a clear lane away from the pack and getting to the top mark in good shape. More importantly, they were one of the few teams to avoid capsizing.

“We were going fast upwind and downwind, and found some good lanes on the left side of the course,” said Nielsen, the defending European Champion who loves the challenge of such tough conditions. Behind the Danes in 3rd overall are the British crew, Charlotte Dobson and Sophie Ainsworth.

As with the men’s 49er, some of the top teams who had made a bad start to the regatta enjoyed the opportunity to make up the lost ground in strong winds. Denmark’s Jena Mai Hansen and Katia Iversen clocked up scores of 1,3,3 to move up to 9th overall, while the reigning World Champions from New Zealand, Alex Maloney and Molly Meech put in 2,3,1 to move to 7th overall.

Tomorrow the Gold Fleet racing begins, with a first start for the 49erFX at 11:00.

Tune in at 09:00 for the Magic Marine Morning Show where we have fantastic guests each day.  Day 4 will feature the Olympic gold and silver medallists from London 2012, Nathan Outteridge and Pete Burling.

Here you can view the 'Graveyard' video from day 3: http://youtu.be/TYT1p4FhfXA