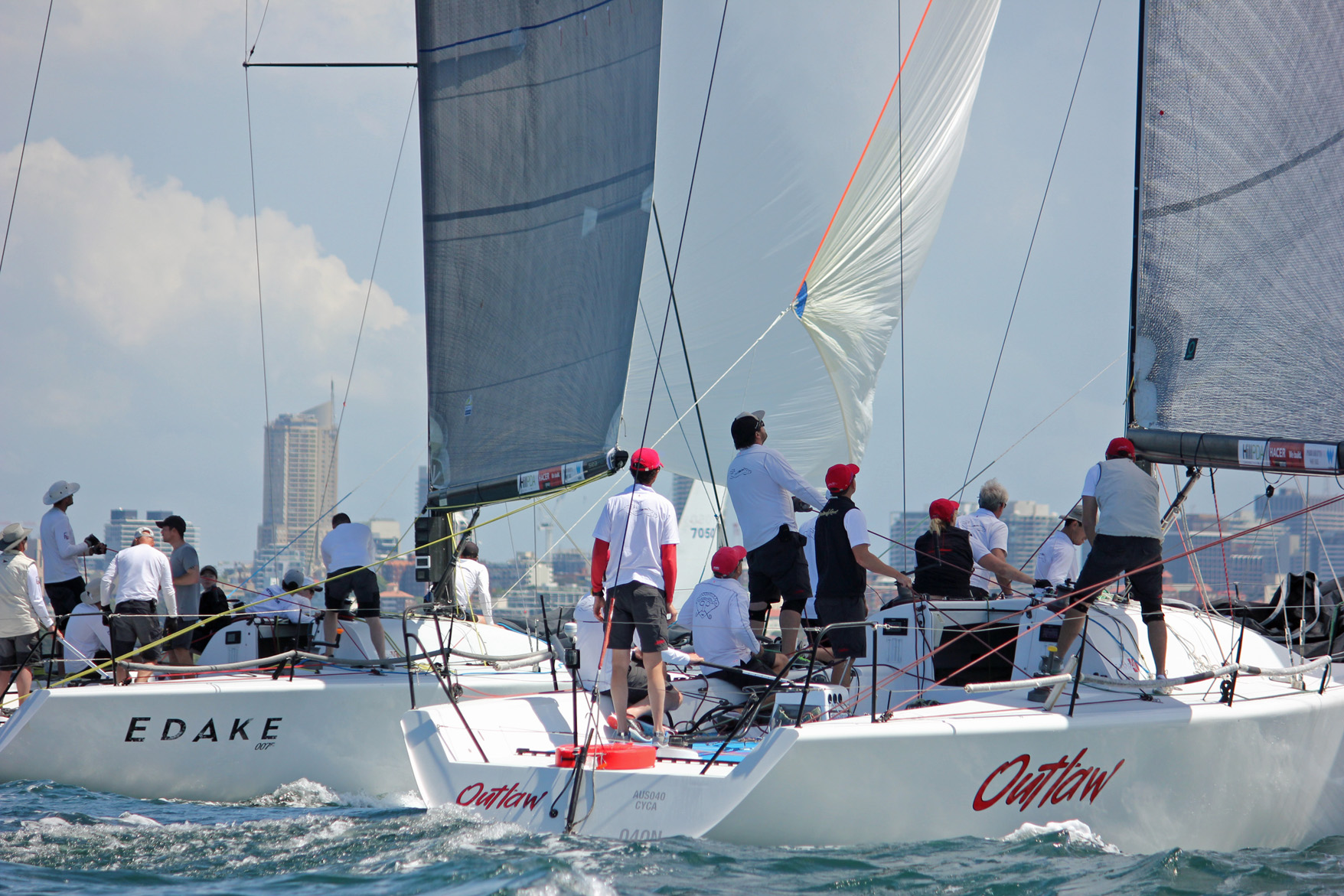 Five firsts and a second added up to an incontestable series win for Tom and Alan Quick’s Outlaw in the Farr 40 class’ Middle Harbour Yacht Club One Design Trophy contested on Sydney Harbour October 21-22.

Joe de Kock’s Newcastle Farr 40 Good Form was back out with the fleet, the skipper wearing a moon boot to support his ankle which was injured when he accidentally stepped into the mainsheet which then loaded up in a gybe in strong winds on Saturday. Doctors at Lake Macquarie Private Hospital don’t believe de Kock sustained any broken bones but can’t diagnose him properly until the swelling and bruising settle down.

This afternoon de Kock and his son fly out to South Africa for a three-day mountain bike race starting Friday. “I think I’m going be OK, I’m staying positive and I haven’t found out too many details from the doctor… just in case I can’t do the bike race,” he laughed. “By chance I’m going to Cape Town first, to my family of doctors – I have my X-rays in my luggage.”

On Good Form’s season so far he said: “Well we can’t do any worse, yesterday we didn’t finish a race and today we finished last in all three. We have lots of excuses but we’ve got to do these things better. Before I became a boat owner I didn’t realise how hard it was to get eight good sailors together for regattas, let alone practice. Having said all that we had a great weekend.”

Edake skipper Jeff Carter was delighted to collect the final bullet and happy with second overall. “As usual in the Farr 40s it was very close racing,” he said. “Hats off to the Outlaw crew; they’ve got a team of guys who know how to sail a Farr 40 and they have a world champion boat underneath them. Also special thanks to my crewman Noel Holder who came back on board on the main after a year off.”

Winds NE to ENE built to 12 knots by mid-afternoon before the sky darkened and crews copped a drenching when a sou’east change passed through. By that stage the trophies were already decided, handy margins separating the first, second and third placegetters.

Bringing nine crew up from Melbourne for a two-day regatta in Sydney is no easy feat, so for Nutcracker co-owner Rob Davis the hospitality extended by MHYC and the other Farr 40 owners means a lot. This season he and second owner Andy Baker have brought in Sydney based Michael Coxon from North Sails as tactician, and it’s added a new dimension to their program.  “We’ve learnt as much from him this weekend as the whole of last season,” Davis praised. “He’s a great teacher and a great imparter of knowledge.”

The next Farr 40 event is the Sydney Short Ocean Racing Championship November 24-25 (non-pointscore) followed by the Newcastle OD Trophy December 9-10, 2017.