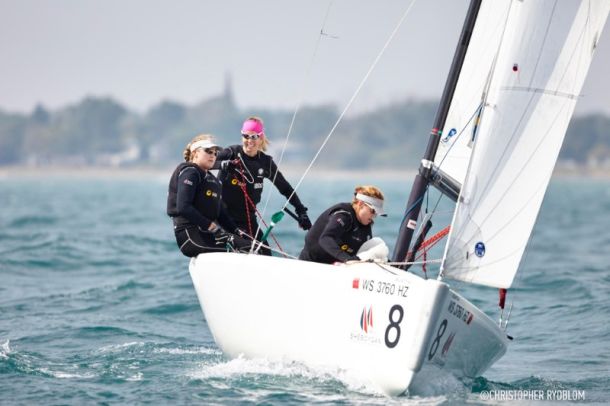 World #2 Anna östling keeps dominating the Buddy Melges Challenge, the penultimate event of the 2015 WIM Series. After another day with just ones on the score sheet, the Swede concludes the round-robin with a clean sweep: “It’s been so fun, the conditions are fabulous. We’ve been proactive and communicative in the boat, fighting hard for every metre, but it’s great when the hard work pays off,” the exhausted but very happy skipper sighs and smiles.

The sailing conditions on the Lake Michigan race course, set by Principal Race Officer Rich Reichelsdorfer just off the beautiful Blue Harbor Resort in Sheboygan, Wisconsin, were almost a carbon copy of the opening day. Bright sunshine, fairly big waves to get the most exciting surfs on, and even a bit more wind with gusts up to 18 knots: “This is sailing, in general, and match racing, in particular, at its best,” Anna östling states.

Except for one recent day of practising in the Elliott 6M:s in Sheboygan before this event, Renée Groeneveld of the Netherlands hadn’t done any match racing at all since sailing in these exact same boats in the 2012 Olympic quarterfinals. Nevertheless she only lost one match in the round-robin, to the seemingly unbeatable Swede.

“We didn’t expect anything, and are really surprised how well we’ve been doing. Of course we’ve made some mistakes, but I still have the match racing skills somewhere in the back of my head. Some of it a little too far away in the back though,” Groeneveld explains with a big smile on her face.

While östling and Groeneveld won all their Thursday matches, home sailor and World #3 Stephanie Roble recovered very well from a not that good opening day of the round-robin, also lining up only wins. An especially eventful match was decided already in the start, when Roble gave Pauline Courtois a really hard time. The French skipper got two penalties quite early in the pre-start manoeuvring. Then she was black-flagged for coming down too much on the American boat, in an attempt to keep clear of the starting line before the signal went off.

“We’re really happy with how things went today. The weather was pretty similar to yesterday, but we worked better together in the boat and sailed a lot faster,” Roble comments.

Friday morning Anna östling will choose her opponent for the quarterfinals, to be followed by sail-offs for 5th to 8th and 9th to 11th places. The weekend will then see the semis and the final matches. On Sunday we’ll know who gets her name on the Buddy Melges Challenge Trophy, a replica of the America’s Cup, residing in the Sheboygan Yacht Club.