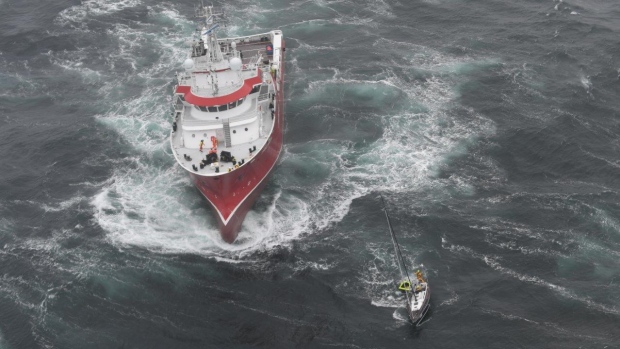 The OSTAR and TWOSTAR single- and double-handed race across the Atlantic has been decimated by a severe storm that has seen four boats abandoned and six sailors rescued.

The abandonments are: Illumia (Michelle Zambelli), Furia (Michael Kopanov/Dion Zoykov), Happy (Wyste Bouma/Jaap Barendregt) and Tamarind (Mervyn Wheatley. As the report from CBC News Nova Scotia below states, winds rose to over 60 knots and ships at sea, including the Queen Mary 2, were called to their aid.

The sole Australian entrant, Mark Hipgrave in his Jeanneau Sun Fast 3600 Mister Lucky, is still sailing and currently lies in 3rd place for line honours in the single-handed race and fifth overall.

Five people aboard three sailing boats that were stranded after encountering hurricane-force winds during a transatlantic race on Friday have been rescued.

Despite the storm and damage to the boats, he said no one was hurt beyond cuts and bruises.

“It's a great day because five people in the end were rescued from a pretty dire situation. They're all safe, they're all going to be able to get home to their families and loved ones,” Saucier said.

A fourth sailboat that was previously in distress is still being monitored as it returns to the Azores, he added.

He said the sailboats that were taking on water will be lost.

“Those vessels have been abandoned at sea and most of them will most likely disappear below the surface of the water eventually,” Saucier said.