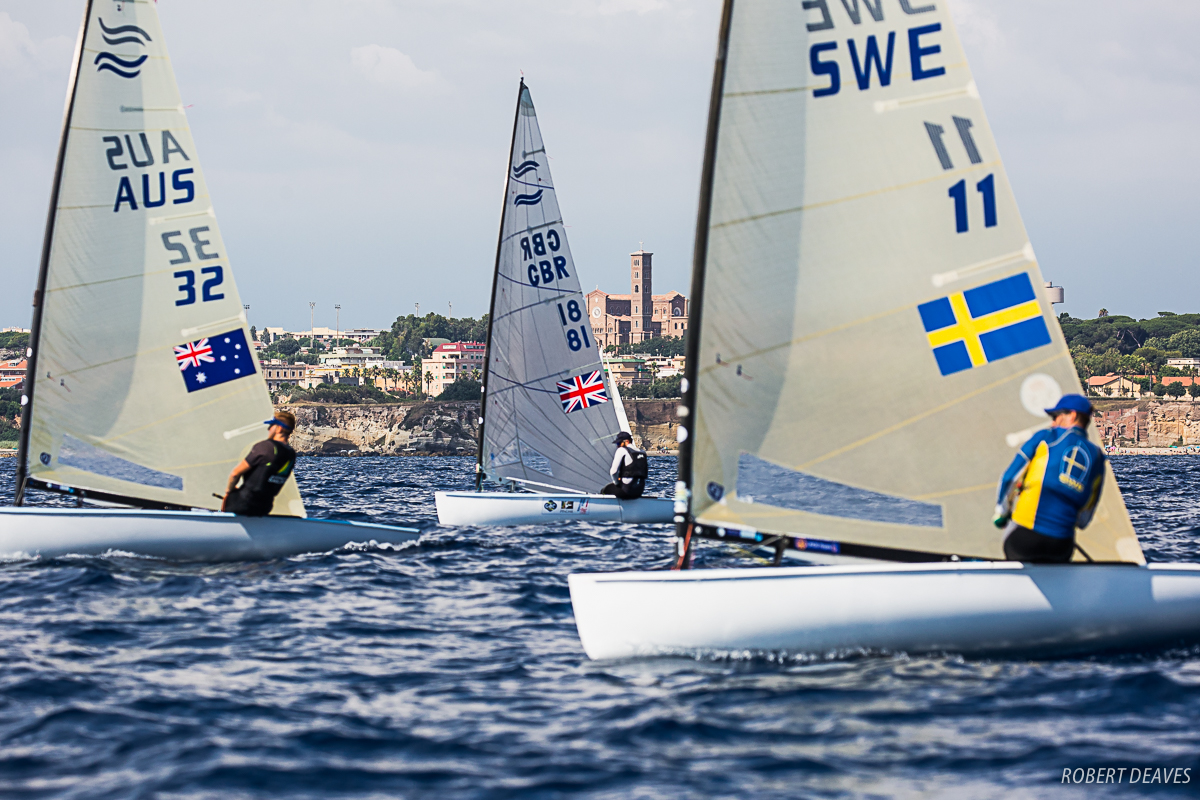 Oskari Muhonen, from Finland, has secured the U23 Finn World Championship for the Jorg Bruder Finn Silver Cup with a day to spare in Anzio, Italy after two more races on the fourth day in the toughest conditions so far.

Federico Colaninno, from Italy, won the opening race and sits in second, while Joan Cardona, from Spain is third. The second race was won by Guillaume Boisard, from France. Liam Orel, from Slovenia also secured the U19 gold, with a huge points lead over the rest.

The day began with another long delay to wait for the wind, but the fleet was released earlier than Thursday for a 14.30 hours start.

After the numerous starting errors on Thursday, there was not a single one on Friday – another tough lesson for the young sailors. The wind never really passed 8-9 knots and in the second race, was exceptionally shifty and patchy as a range of thunderstorms passed by inland.

Colaninno was again the pacesetter in Race 9, rounding the top mark overlapped with Cameron Tweedle, from Britain. Tweedle rounded the gate in the lead, but then the Italian found more pressure on the right to march out an impressive lead. Tweedle recovered to second but was the yellow flagged downwind to drop into third. Most of the other regatta leaders were deep in the fleet with Muhonen in ninth and Cardona in 19th.

After favouring the right in Race 9, and rounding near the back, Cardona tried the same strategy in race 10 to be second at the top behind Johannes Pettersson, from Sweden.

However, on the second upwind, instead of staying with the right he covered the front of the fleet up the middle left. This allowed some of the mid-fleet to escape to the right and when the wind shifted under the thunderclouds, they were rewarded with a 30-degree shift up to the top. Boisard was the greatest beneficiary to round first from Alexey Moskalev, of Russia.

Boisard maintained his lead down the final nerve-wracking run to win from Moskalev and Nils Theuninck, of Switzerland. Theuninck separated from the fleet and took maybe 10 places. Muhonen was deep as well and followed, taking just enough boats to put 12 points between himself and Colaninno, enough to take the title with a day to space by just two points.

Boisard has been struggling all week with consistency, though he has had his chances. “My season was one where I was less prepared. I did Palma, but I didn’t train before or after because of a knee injury with my tendon, so it was a huge disappointment for me,” he said.

“I won the French nationals two weeks ago, so that was good and very positive coming into the Silver Cup in good shape, but I see that on the water I am not at my top level. Even if I won the race I couldn’t do much more this week.

“Today was very light winds, cloudy over the land, quite difficult, shifty and difficult on the water.

“We needed to be very focussed from the beginning to the end of the race, never giving up before crossing the finish line. I won the last race and I was not in the top group at the beginning of the race so just taking all the opportunities until the end and it paid off, so I am happy.”

As a French sailor, he feels the decision to remove the Finn from Paris 2024 very acutely: “The decision from World Sailing to take the Finn away from the Olympic Games is a big sadness for me as I was getting stronger and stronger,” Boisard said.

“My main objective was Paris 2024. If the Finn continued being Olympic I would continue as it is at home. Marseille is almost where I am from, so I hope the Finn will be reintroduced in the Olympics.”

“My dream was to be at the Olympics one day and win a medal, and it’s the same case for all the other guys here. We don’t know what to do now. We try a lot of other boats but nothing fits to what we are.

“We are big guys; we are tall; we are heavy; so there is no alternative for us. So that’s very sad. I don’t see myself, with 10 kg more, sailing anything else. I didn’t really give up on my studies, so if the Finn doesn’t stay, I have think about my professional life.”

He could become another loss to Olympic sailing, collateral damage for the sake of change.

Calvert said about the day. “Today was pretty tough. We had light winds and shifts, short chop, really tricky and hard to get the Finn moving. It was one of those days when you really had to commit to your strategy and be brave.

“Some of the guys pulled off some really nice races. Unfortunately I was not one of them. But this is yacht racing and we’ll have another crack tomorrow for the last race.”

On the main topic this week, “Obviously losing the Finn from 2024 is affecting my next couple of years and my plans. I had hoped to build towards that. I’ve made it into the Australian team for the moment, and that was where my path was headed. So it’s a shame not be able to see that through in the end and hopefully achieve my goals.

“I really feel for all the boys in the fleet here. Even the Silver Cup as an event is probably going to suffer as the pathway ends, so I really feel sorry for everyone here. It’s a shame.

“It’s very important we keep pushing to get the Finn back in for 2024. We need to make sure we keep talking to the delegates and pushing the nations, making them see how important it is, not just as a beautiful boat, but also for the heavyweight sailors. They really need make sure they know what they’re doing by removing the option for everyone over 85 kg.”

The new 2019 U23 Finn World Champion, Muhonen said, “It was a pretty bad day for me to be honest. In the first one I was pretty good in the game but then started making stupid mistakes, and the second one was really hard with the wind shifting a lot, and pressure differences.

“I managed to still make top 10, but other guys made mistakes as well, so I managed to get the win already.”

In the second race he rounded about 23rd. “There was really nothing more to do than try to race hard and luckily I managed to catch a few boats on the last downwind. On the second upwind I went middle right and caught up a few. But more right would have been a bit better.”

“I think it was really good to go deep on the downwind. Everyone started to go really high so I was just riding the pressures down and that worked out really well for me and Nils in the end. That was the big gain in that race.”

Racing in Anzio concludes on Saturday with one more race scheduled, which will decide the silver and bronze medals for the U23 and U19 competitions.