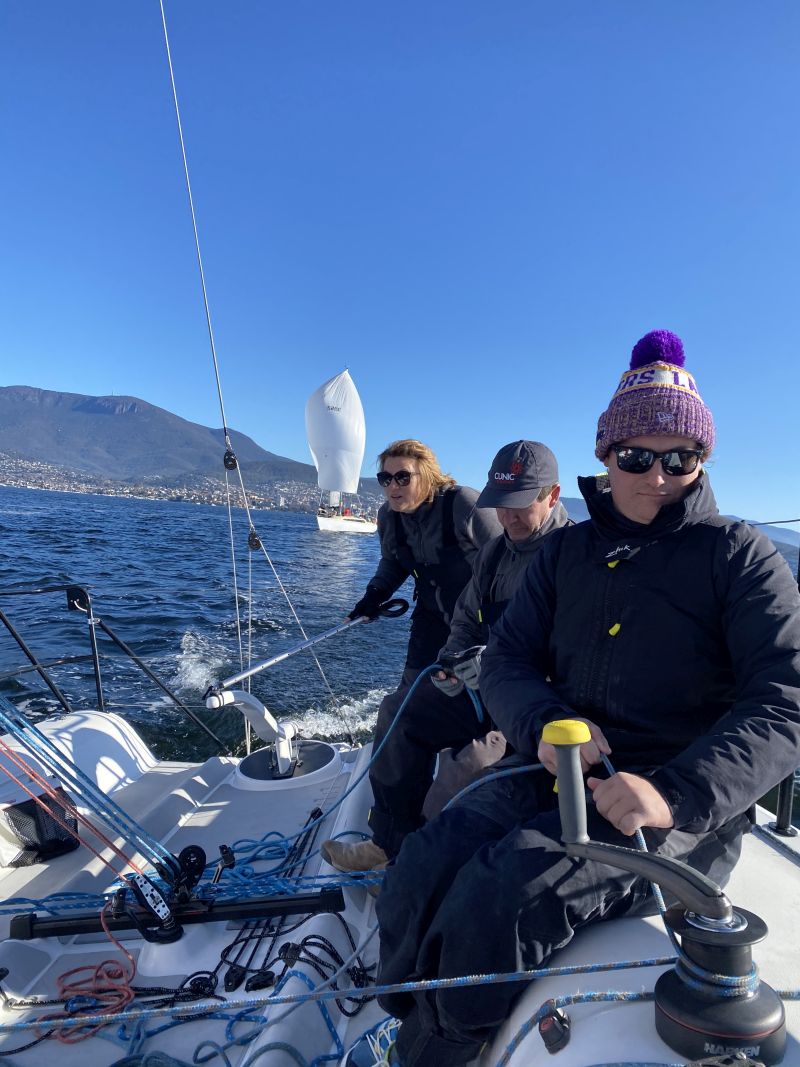 Jacinta Cooper at the helm of Crusader on the River Derwent today. Photo Indy Cooper.

Yacht racing finally returned to the River Derwent today, with the fleet of 53 boats, crewed by 370 sailors, enjoying near perfect racing conditions on a sunny winter’s morning with a 10-15 knot nor’nor’westerly breeze.

The honour of leading the big fleet across the finish line in the Combined Clubs Winter Series went to Mike Pritchard’s Cookson 50, Oskana, a past overall winner of the Sydney Hobart Yacht Race.

A fine third went to the Melges 32, helmed by Jacinta Cooper in the absence of her husband, SB20 champion Brett Cooper, and her predominantly youth crew of daughters Indy (14) and Jorja (16) Cooper, Howard Tapping (16), Jack Allison (17), Charlie Goodfellow (17) and his father, Richard Goodfellow.

Bellerive Yacht Club conducted the race, with sailing manager Michael Faure delighted that they had managed to hold the second scheduled race of the Combined Clubs Winter Series after last Sunday’s no wind, no race.

“It was a wonderful day for a return to sailing on the Derwent, lovely conditions and a big fleet,” said Mike, who steered his own boat Piya, a venerable Thunderbird 26, into fourth place in Division 4. “We had quite a fresh breeze at the mid-river start but it faded late in the morning with seven boats not finishing in Division 3.

Unlike the RYCT and DSS, BYC is using mid-river starts and finishes, sending the divisions on three different versions of the club’s winter races last year.

From the start, Division 1, 2 and 3 went to a windward mark off Rosny Point, with Division 4’s first mark off Kangaroo Bluff. From there the boats had a close reach across the river and then a spinnaker run back across to the Eastern shore.

A fleet of 17 boats contested Division 3, with the SB20 Mind Games (Phil Reid) leading the fleet home and winning on corrected time from Just Jones (David Wyatt) and the syndicate-owned Wildfire, a Farr IMS 31.