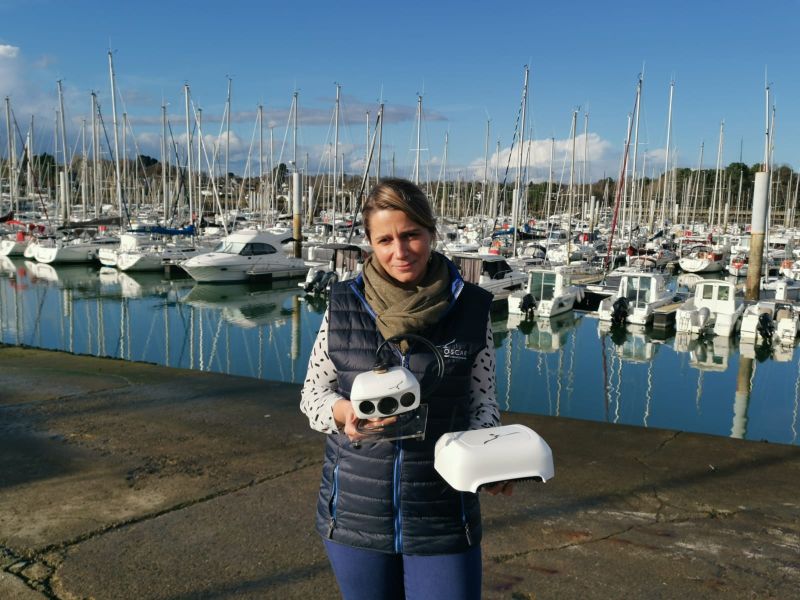 03/11/2020
Short of space flight, a 40,000km non-stop singlehanded yacht race around the world represents one of the toughest human-mechanical challenges that can be undertaken. Sadly this often comes with a high attrition rate. Over the last eight editions of the Vendée Globe only 53% of the entries have completed the course. The other 47% have been forced to retire with gear failure or personal injury, but often due to a collision that has caused irreparable damage.
Fortunately for this year’s Vendée Globe, that sets sail from Les Sables d’Olonne, France, on 8 November, the risk of collision will be significantly reduced. Many of the competing IMOCAs have been fitted with a pioneering new electronic safety aid called OSCAR. Using day and thermal cameras combined with artificial intelligence, this provides a second set of ‘eyes’ for the solo skipper both during the day and, crucially, at night time as well.
OSCAR’s aim is to prevent a collision with any of the many potential threats a vessel can encounter at sea, be they other vessels, unidentified floating objects such as logs, buoys or containers, as well as sleeping sea mammals, any of which could put a skipper out of the race…or worse.  In practice, OSCAR instantly alerts the skipper of any potential danger and indicates the position of that threat on a dedicated map. The skipper can view and record the images transmitted from OSCAR's cameras.
OSCAR was conceived over five years ago by Raphaël Biancale, a Franco-German automotive engineer and has since been developed by his team at BSB Group, using similar intelligent self-learning systems to those originally created for the car industry. With former IMOCA Director General Gaëtan Gouerou, one of the creators of the CDK shipyard, and a professional yacht racing team project manager of some 30+ years experience, Raphaël Biancale set up BSB Marine in May 2018. Since then top French offshore racing skippers and their teams have been quick to adopt OSCAR and its ground-breaking technology – among them Vendée Globe former winners Vincent Riou, François Gabart and Armel Le Cléac’h, who helped develop the system’s specification.

This Vendée Globe will be OSCAR’s most severe test to date. Eighteen of the 33 IMOCA competing in this winter’s solo lap of the planet have been fitted with the latest OSCAR system. This comprises a compact, lightweight masthead-mounted box containing forward-looking day and night cameras, linked to OSCAR’s processor down below that in turn connects to any type of display.

Ships of old used to have a man ‘up the crow’s nest’ able to survey the expanded horizon from the top of the mast – it is here that the shout ‘LAND AHOY’ comes from in pirate films. OSCAR performs a similar duty, only it does so electronically day and night continuously. OSCAR's innovation is to use artificial intelligence, and more precisely artificial vision, the technology that enables a machine to analyse, process and understand images.
OSCAR is making its contribution to the development of safety at sea. It is not the perfect or ultimate anti-collision system, but it is pioneering a technology that will contribute greatly. It will also improve with every mile sailed, for like a human being, the more OSCAR learns and the more experience it gains, the better it performs. The 18 IMOCAs it is fitted to in this Vendée Globe will each provide huge learning opportunities to fine tune the database, at the core of OSCAR.

A reliable collision warning system is the holy grail of marine safety aids. While OSCAR is being put through its paces and continues to ‘learn’ on solo non-stop round the world race boats, its applications elsewhere are far-reaching, starting with all types of pleasure boats that venture offshore, but also for ships and commercial vessels and of course the many un-manned boats currently under development around the world.

Like the skippers of the Vendée Globe, the famous sailor, Jimmy Cornell, founder of the World Cruising Club and successful author of the World Cruising Routes, has also decided to install OSCAR on his all-electric Outremer catamaran “Aventura Zero” for his next round-the-world voyage, which will follow the same route as the first circumnavigation of the globe carried out 500 years ago by Magellan-Elcano.

Computer vision, which is already used in cars, will in the future play a central role in the development of maritime navigational aid systems such as autopilots.

In the IMOCA class many solo offshore sailors are eagerly looking forward to developments of OSCAR including an interface with their yacht’s autopilot so that it will automatically steer them away from potential collisions.

Vendée Globe skippers share their views on the importance of OSCAR:

“I remember in the Volvo Ocean Race in 2014 when I was at the helm, not far from the African coast – we were sailing very fast, at over 20 knots under the big gennaker, with a full crew on board. I heard a scream as a tiny little light passed about 50 cm from the edge of our boat. It was a wooden fishing boat with no light and the guy just raised a torch when he was right next to us. We couldn't see him, we wouldn't have seen him on the radar, we wouldn't have seen him with our eyes and we almost killed the guy. That's the scariest part for me – of course we can damage our boat, which might force us to abandon a race, but we have to do everything we can to avoid damaging other people as well. One of the reasons I put OSCAR on Initiatives Coeur is because of that memory – and that was in a fully crewed race. When I'm alone on a boat, it's even harder to see people. OSCAR, for sure, would have warned us of a situation like that.

“OSCAR can be useful for all kind of boats and not just for ocean racing boats. For sure, it’s a big system and there is some development involved but I think in the future that OSCAR could help a lot of people. Even if you have a boat that’s made of steel and is really strong and are less worried about a collision , it’s still also about not running over someone that is on a small boat that you can’t see. It’s so important. Everybody can benefit from it, from racing boats, commercial boats and cruising sailors. It’s a great idea and I think it will save lives.”

“For example, when I was last out, OSCAR ‘beeped’ and I wondered why and then it stopped and when I looked outside I realised there were dolphins jumping in front of the boat – if it can detect that, it demonstrates the sensitivity of the system.”

“I want to do everything I can to ensure that I finish the Vendée Globe. Collisions are one reason we have seen in the past that prevented people from finishing. Radar helps me avoid collisions, but OSCAR can also see small floating objects.

“I think the system is excellent and positive for safety, for sailing alone or with a crew, it doesn't matter, because at night or in bad weather, no one can see anything.”

“I decided to install OSCAR because the facts are impressive. There is a risk of hitting things on a round-the-world trip, so if you can reduce that by even 50%, it’s already worthwhile.

“On the Transat Jacques Vabre, last year, off the coast of Brazil, on two occasions OSCAR detected small fishing boats that were so close to the water that we couldn’t see them visually because of the swell. When OSCAR’s alarm went on, we were wondering why, because we couldn't see anything. Then we finally found out why and we managed to avoid colliding with some fishing boats.
In short, the skippers of the Vendée Globe, and more broadly all OSCAR users and the BSB team have the same objective: to make sailing safer. It is collaborative work that perfectly matches the solidarity of all seafarers.
by James Boyd / BSB Marine
The extent of the problem

Collisions experienced by all sorts of vessels still occur far too frequently. A report by the U.S. Coast Guard lists 470 collisions recorded in 2018 in American waters alone.

While it is difficult to quantify the scale of the problem, the Centre of Documentation, Research and Experimentation on Accidental Water Pollution (CEDRE), estimates that 10,000-15,000 containers fall off ships into the water each year.

Collisions with whales and other large sea creatures, species that are often under threat, is another frequent cause and often proves fatal for the animal. The ever-upgrading OSCAR database will certainly help preserve the biodiversity of our oceans.