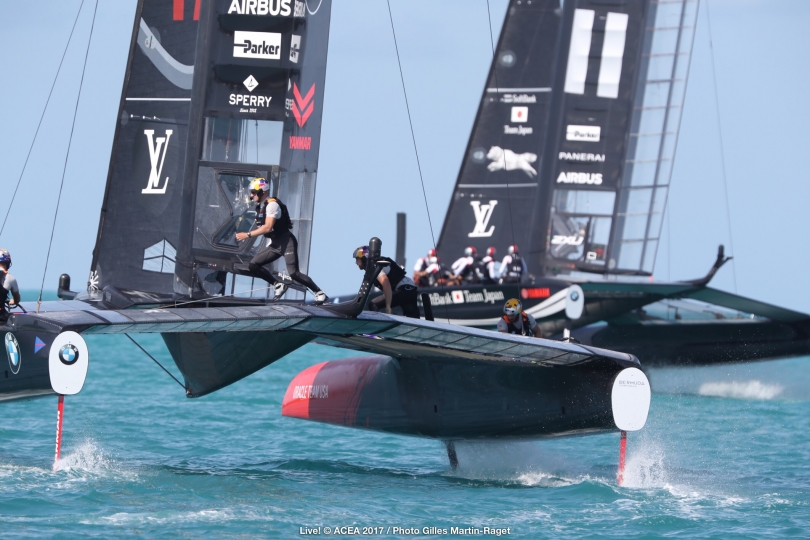 Oracle Team USA sits two points clear on the leaderboard of the America's Cup Qualifying Series after the second day. Wins over Ben Ainslie Racing and Japan were tempered by a loss to Artemis, but the defender is looking the team to beat at this early stage.

Team France, who were beaten by over two minutes in both races on the first day, bounced back today with a win over Artemis and now are not looking the easy beats everyone expected.

Racing was again held in moderate conditions, starting at around 12 knots and dropping away to less than nine knots at times. Again, wind shifts of more than 30 degrees were experienced across the course.

Franck Cammas won the start over Nathan Outteridge with a classic hook manoeuvre, which is becoming the weapon of choice for skippers, and led at the reach mark. But the first gybe was a disaster for the French, who fell off their foils and let the Swedish boat through.

It looked like a continuation of yesterday when Team France had reasonable straight line speed but were well below the other crews in performing foiling manoeuvres. But like yesterday, the race course was throwing huge wind shifts at the tacticians and on the first beat a big right-hander favoured Cammas, who led at the top mark by 22 seconds. Despite some fine sailing by the Artemis crew, which closed the gap on the final beat, the French held on for a three second vicyory.

A difficult pre-start in the first of three scheduled races for Oracle saw the American defender trail Land Rover BAR off the starting line.

Both teams were late for the start after pushing to leeward of the starting line and very slow across the line. Oracle were forced to tack to make the start, while BAR pinched up to make it around the starting mark and led around mark one by nine seconds.

The British challenger held the lead through the first gate but on the first upwind, Jimmy Spithill and tactician Tom Slingsby threaded together several windshifts to make a pass and lead by nine seconds.

Shortly after the rounding, BAR had a big crash down, losing several more boat lengths and Oracle was able to hold its lead the rest of the way to take the win by 39 seconds.

“Tommy called a nice split at the bottom gate and had us in phase with the shifts the rest of the way,” Spithill said. “The guys dug in and the boat is looking quicker every day, so we just have to keep it going.”

The next pairing delivered the much-awaited grudge match between Dean Barker of Team Japan and Peter Burling of Team New Zealand. Burling replaced Barker as skipper of the Kiwi boat shortly after the 34th America's Cup loss to Oracle and Barker left the team in acrimonious circumstances.

Barker has always been a strong starter and although both boats crossed together, the Japanese had better boat speed and led around the reach mark. The crews drag raced each other down the first run at speeds of around 35 knots, with Japan holding the edge. Despite splitting tacks on the way back up, nothing much changed and another drag race downwind saw Japan 13 seconds ahead.

On the final beat, the Kiwis were tacking slightly better, staying smooth on their foils. They ducked the Japanese stern on the first cross, then a big right shift lifted them and they had the lead for the first time. Throwing a loose cover, they sped away to win by 33 seconds.

“It was a tough race, we had a pretty good start but were just a fraction slow to accelerate because we were close to the start line and they just got over the top of us.” said Skipper Glenn Ashby. “From there it was just all about keeping composed tactically and focusing on every manoeuvre and making them clean and making the most of every opportunity. These young guys onboard are very cool, and our powerhouses were giving it everything and our chance came to get ahead.”

For a second consecutive race, Oracle trailed off the starting line, following Artemis around the first mark and through the first downwind gate.

Tactician Tom Slingsby and skipper Jimmy Spithill engineered a split at the bottom gate, but the windshifts went in favor of Nathan Outteridge, who extended his lead on the first upwind leg to 19 seconds.

On the downwind, Slingsby called for an early gybe to set up another split on the final upwind leg. While Artemis responded with a covering move early, they allowed a split further up the leg.

Oracle made a big gain, and looked it looked as though Spithill, Slingsby and crew had made another comeback. But the final shift on the leg went to Sweden and Oracle couldn't make the pass, dropping a point for the first time in the event.

The final delta at the finishing line was 39 seconds.

An unforced error by Peter Burling, when he entered the starting box early, allowed Ben Ainslie to lead comfortably across the line and around the reach mark. However, the Kiwis won the downwind drag race to lead by two seconds and extended that lead when they picked up a favourable shift on the beat.

There has been a turnaround in British fortunes since the practice races, where their foiling tacks and gybes were flawless but their speed was below that of other teams. They now seem to have reasonable straightline speed but in this race in particular, bad manoeuvres cost them dearly. Just as they were getting back in the race, a splashdown mark rounding bled off all speed and the Kiwis were able to finish comfortably a minute and 28 seconds ahead. The Brits have some soul-searching to do tonight.

The final race saw a repeat of the later races in the 34th Match, when Jimmy Spithill worked over Dean Barker with a faster boat and a very determined crew.

At the start he put himself in the controlling position underneath the Japanese boat and forced Barker well up the course and away from the first mark. Taking a perfect line, the American boat sped away and with Spithill throwing a loose cover, there was nothing Barker could do. The Americans were untroubled to win by 54 seconds.

The leaderboard is a little confusing at this stage because Oracle has raced five times, France has raced three and the others have raced four times each. Also, BSR brought a two point advantage into the series courtesy of their win in the World Series, and Oracle started with one point as runners-up.

There are three matches scheduled for tomorrow: