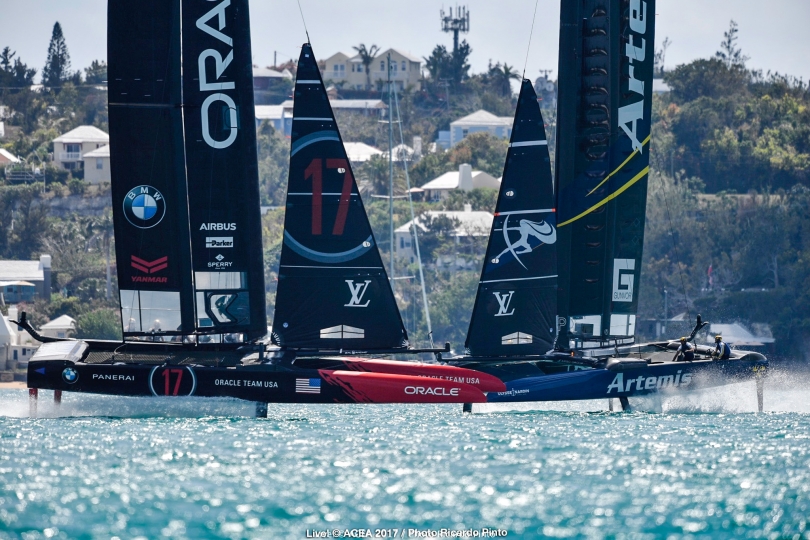 A difficult pre-start in the first of three scheduled races for ORACLE TEAM USA on Sunday, saw the American defender trail Land Rover BAR off the starting line.

Both teams were late for the start after pushing to leeward of the starting line and very slow across the line. ORACLE TEAM USA even had to tack to make the start, while Land Rover BAR pinched up to make it around the starting mark and led around mark one by nine seconds.

The British challenger held the lead through the first gate but on the first upwind, ORACLE TEAM USA skipper Jimmy Spithill and tactician Tom Slingsby threaded together several windshifts to make a pass and lead by nine seconds.

Shortly after the rounding, Land Rover BAR had a big crash down, losing several more boat lengths and ORACLE TEAM USA was able to hold its lead the rest of the way to take the win by 39-seconds.

“Tommy called a nice split at the bottom gate and had us in phase with the shifts the rest of the way,” Spithill said. “The guys dug in and the boat is looking quicker every day, so we just have to keep it going.”

Crew on board for Sunday's first race:

For a second consecutive race on Sunday, ORACLE TEAM USA trailed off the starting line, this time following Artemis Racing around the first mark and through the first downwind gate.

Tactician Tom Slingsby and skipper Jimmy Spithill engineered a split at the bottom gate, but the windshifts went in favor of Artemis Racing, which extended its lead one the first upwind leg to 19 seconds.

On the downwind, Slingsby called for an early gybe to set up another split on the final upwind leg. While Artemis Racing responded with a covering move early, they allowed a split further up the leg.

ORACLE TEAM USA made a big gain, and looked it looked as though Spithill, Slingsby and crew had made another comeback.

But the final shift on the leg went to Sweden and ORACLE TEAM USA couldn't make the pass, dropping a point for the first time in the event.

The final delta at the finishing line was 39 seconds.

Crew on board for Sunday's second race vs Artemis Racing: