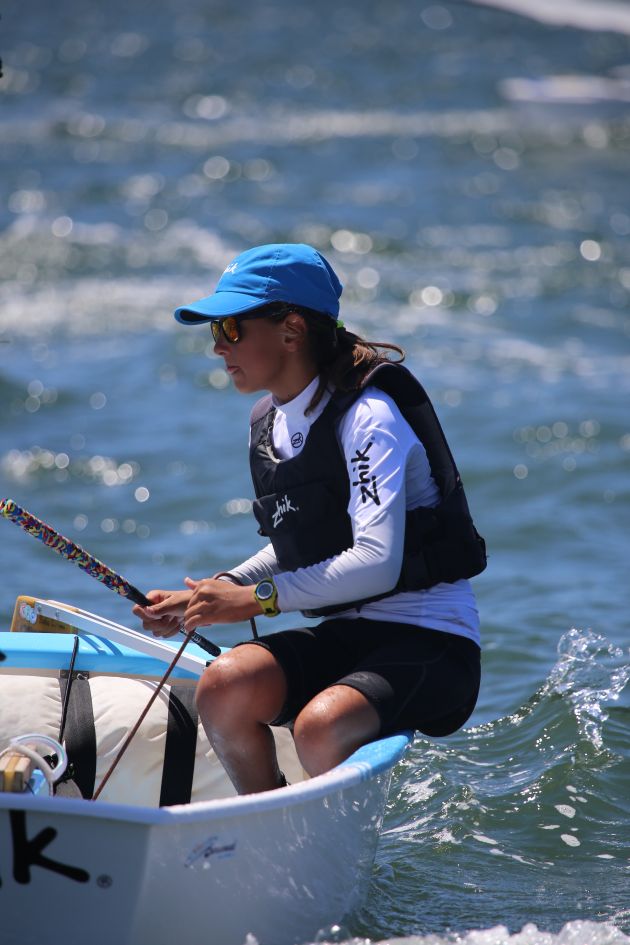 Forty-three young female sailors, a full compliment of volunteers in support, blue skies, a perfect sea breeze and wonderful environment just west of the Sydney Harbour Bridge. This was the setting for the NSW International Optimist Dinghy Association’s “OptiChick” event, run over the Valentines Day weekend and hosted by the Hunters Hill Sailing Club.

OptiChicks was born of a growing realisation that the things that girls enjoy in their early years of sailing (and probably in all their years of sailing) are occasionally different to those of young boys. Indeed girls probably need time and space in developing their love of sailing and their skills in an environment where there are less boys.

This weekend was all about bringing together girls of all ages and skill levels, from Australian squad level down to the greenest of Tackers graduates two weeks into owning an Optimist, for a day of relaxed sailing, island exploration, twilight cruises and a dinner and workshop with the three wonderful Olympian role models, along with an overnight sleepover!

It was a weekend with a difference to the usual sailing weekend – there was no specific coaching sessions, as many of these girls already are highly coached and sail in highly regulated programs. This weekend was an opportunity for lots of laughter and a chance to just ‘be kids’ in their wonderful little freedom machines, the International Optimist Dinghy.

This, combined with a sleep over at the sailing club proved to be be the perfect lead in to the final round of the NSW & ACT Travellers Trophy Series, where registrations reached an astounding 121 boats – a event in Australian junior sailing this summer only exceeded in number by the Optimist National Championships held in January.

Sailors came from all over NSW and the ACT with a surprise, but highly welcomed and valued, visit from a young sailor from Southport Yacht Club in Queensland, whose parents called event organiser, Chris Stannage of Hunters Hill Sailing Club at around 9.30 on the Friday morning before OptiChicks saying, “We’re on our way see you tomorrow”! Over 1000km of driving one way, and they made it in time!

Hunters Hill Sailing Club proved to be the ideal venue for OptiChicks, with its wide open lawns providing the perfect rigging area, and its interesting location – a peninsula which the local aboriginal tribe named “Moocooboola”, literally meaning “where the waters meet”, at the junction of the Parramatta River, the Lane Cove River and the Inner West Harbour of Sydney Harbour itself.

The girls sailed from the club, east to the waters off Goat Island, where they enjoyed a spectacular Harbour Bridge view, before sailing a clockwise loop around famous shipbuilding and former penal settlement, Cockatoo Island, where they later adjourned by rib for afternoon tea and a swim at the newly developed swimming enclosure.

The sailing was interesting – the wind was channelling through the Waverton area with speeds of up to 20 knots, which proved a challenge for some of the very youngest sailors – but the great surprise was how many of the young girls kept control of their Optis by following the example and encouragement of the older girls around them.

Rising stars of Australian junior sailing, Mina Ferguson, Brooke Wilson, Bella Green, Pearl Twomey, Bridget Conrad, Sylvie Stannage, Amelia Quinlan, India MacIntyre and Alana Hodzic kept the young or less experienced fleet in good order, ably supported by half a dozen parent volunteers in both club and private ribs. Indeed, when asked “if she had a swim” during the sail, young Alba Falkenmire looked with surprise at the question and said “only at the swimming enclosure, not from my Opti” – Alba having had possession of her Optimist for less than two weeks at this stage of her sailing career!! It was a terrific moment.

After enjoying a relaxing hour at Cockatoo Island, where the girls explored the tunnels, the coffee shop and marina and the swimming enclosure, they were all welcomed aboard John and Karen Cole’s 46 foot Swan “Senta”, a yacht on which the Cole family have sailed the Atlantic and many of the world’s other great oceans, and Hunters Hill President Andrew Curtin’s Cavalier for a twilight evening cruise. Joining the girls on this expedition were 1996 Olympic Silver Medallist in swimming, Helen Denman and 2008 Sailing Olympian, Angela Farrell. The waters could not have been more perfect as the sun went down over the inner west, and the chatter of the girls was constant and joyful.

Upon returning to shore, the girls who were joined by many of their parents and, fresh from a major training session over at Middle Harbour Yacht Club, Para Olympic Gold Medallist and 2016 Rio Olympic contender, Liesl Tesch. The girls and their parents enjoyed a beautifully catered meal before a wonderful panel discussion ensued, with Helen, Angela and Liesl speaking frankly about their Olympic experiences, their lives both in and out of sports and their dreams, anxieties and great moments. The questions from the floor were fantastic, and each of the girls was left with an invaluable set of memories and learnings from the evening.

The Olympians and the girls all signed an Optimist Class starting flag, which will form part of the memorabilia collection at Hunters Hill Sailing Club – it will be interesting to go back over this flag and its signatures over the next 20 years or so see how many of the young sailors present go on to higher honours in sailing – it will also form the basis of what will be, no doubt, a wonderful reunion at some point in the future.

After festivities over the dinner it was time for bed – and you’ve never seen parents scatter so quickly! The girls were comfortably bedded down in the great hall of the Hunters Hill Sailing Club, more often used for first class weddings and major celebrations, with four OptiMums from Hunters Hill Sailing Club, supported by two OptiDads (who slept in the boat shed and kept an eye on the Optifleet on the rigging lawn outside!). Amazingly, the hall fell silent at exactly 11.00pm and not a sound was heard until 6.30 the following morning.

And what a morning it was, with the arrival of another 80 or so Optimist Dinghies for the Travellers Trophy event. It was fascinating to watch the girls interact with each other and with the boys out on the sailing course – the new found or strengthened friendships and confidence from just a days special sailing event certainly paid dividends, with two of the girls finishing in the top ten of the event overall, and a number of girls achieving their best or most consistent placing in such an event.

However, it did not leave the girls immune from some reasonably ordinary behaviour from some of the OptiBoys – three incidents that spring immediately to mind include a young girl being hit with a chunk of ice thrown by a boy, another girl being hit in the face and stung quite badly by a jelly fish thrown in her face, and a third very young sailor having her rudder damaged by a deliberate ramming of her boat by a boy in a roughhouse game of “tip”, forcing her retirement from the racing.

Event organiser Chris Stannage said, “Unfortunately, these sorts of incidents have become all too common in Opti events, with girls regularly being sworn at, intimidated and, in one spectacular though unsolved mystery, hospitalised after a collision at the NSW Youth Championships, where the boys involved were heard to be laughing as they sailed off, leaving the Optigirl in considerable distress which required an ambulance visit to the Children’s Hospital and tests for spinal injuries, hip fractures and internal bleeding.

“Much work remains to be done in educating our young boys on how to conduct themselves in an appropriate fashion on the sailing course – the recent use of a significant number of jurors on the start line and around the course at the National Championships was a great start, but more still needs to be done by coaches, parents and clubs in general.”

The OptiChicks program, now in its third year in NSW, is certainly an initiative in the right direction, one so generously supported by Liesl, Angela and Helen, along with Hunters Hill Sailing Club and its sponsor, Saltwater Insurance Consultants. We look forward to further initiatives such as this in coming years and further development of this important group of young athletes, who will form the corner-stone of Australian women’s sailing teams and participants for years to come. Indeed, discussions were heard all weekend about “getting together for a sail in a Laser 4.7”, and plans were being laid about teaming up in a Flying 11, or a 29er, or … who knows? The sailing world is yours, OptiChicks!

Thanks to all the Hunters Hill Sailing Club families who cooked, supervised, donated their RIBS and yachts, slept over and generally ran the show flawlessly! And a big thank you to Bryce Conrad from Gosford / Sunshine Sailing Clubs who brought his RIB down, and Peter Price, who took the fantastic photos out on the water.

Also thanks to the Optichicks from all over the place – we had sailors from: