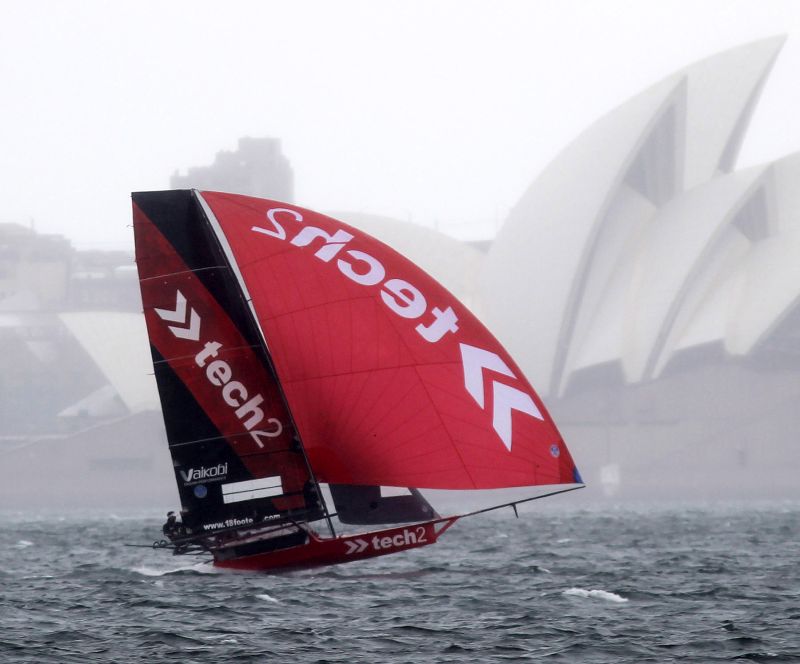 02/11/2020
The Australian champion tech2 team of Jack Macartney, Charlie Wyatt and Lewis Brake gave a masterclass of power sailing with a brilliant victory in Race 4 of the Australian 18 Footers League's Spring 18ft Skiff Championship on Sydney Harbour today.
With 25-knot South Westerly winds gusting to 30-knots, race officials elected to set a two-lap windward-return course between Nielsen Park and Double Bay, and only seven of the 18 boats entered for the race elected to venture out onto the stormy harbour.
Just three of those teams, tech2, Yandoo (John Winning) and Smeg (Dave O'Connor), were on the line when the starter signalled the race start but the trio provided a tight contest as they ploughed head-long into the wind to reach the windward mark off the mouth of Double Bay.
tech2 and Smeg raced with little between them for most of the long windward leg while Yandoo trailed with her second reef-point mainsail and storm jib.
As the two leaders approached the windward marker buoys, tech2 had to sail to the further white buoy while Smeg had less distance to sail to the blue mark.
It didn't matter, the tech2 team managed to come out ahead of Smeg as spinnakers were set for the wild ride back to the bottom mark.
Smeg capsized shortly after and from that point the spectators lucky enough to watch the tech2 team in action were treated to a faultless exhibition in conditions which caused every other team to suffer at least one capsize.
tech2's official winning margin was 12m25s from Yandoo (John Winning, Jasper Warren, Mike Kennedy).  Smeg (Dave O'Connor, Angus Williams, Trent Barnabas) was a further 1m43s back in third place.
The only other team to complete the course was Noakesailing (Sean Langman). Finport Finance (Keagan York) and Winning Group (John Winning Jr.) failed to complete the course.
Races 5 and 6 of the Spring Championship series will be conducted next Sunday, November 8. Spectators can follow the racing on board the club's spectator ferry, however due to the COVID-19 policy, numbers are limited. Booking online through the club's website www.18footers.com is essential. https://www.18footers.com.au/18-footers-sailing/spectator-ferry/
For those unable to make it out onto the water, AeroMedia Live Broadcast team will be on Sydney Harbour to capture all the action.  Live streaming is available at www.18footers.com by clicking on the '18 Footers TV' link.
– Frank Quealey, Australian 18 Footers League