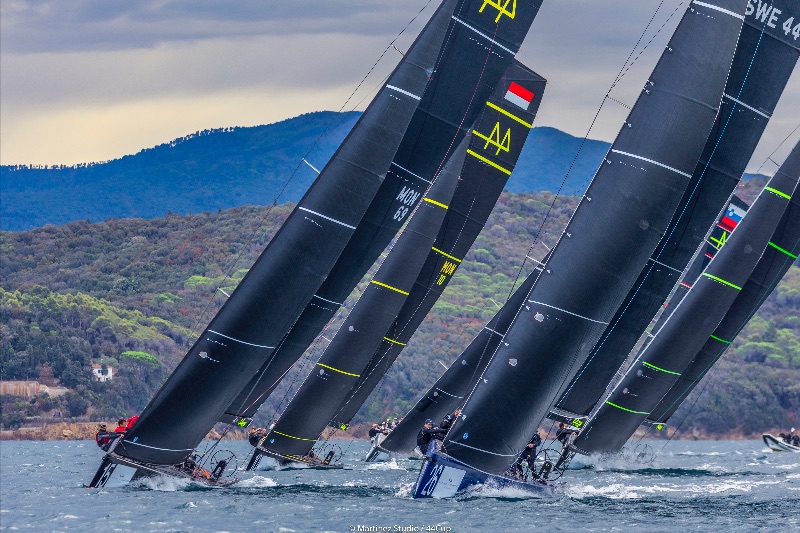 Nobody is giving an inch - Martinez Studio pic

After 30 knot winds prevented any racing on day one of the 44Cup World Championship in Scarlino, Italy, the race committee pulled out all the stops to ensure racing took place today, by bringing the start time forwards by two hours.

Racing at the 11th 44Cup World Championship was finally able to get underway just after 1000 this morning. Three races were successfully held in the bay off Marina di Scarlino in a northerly that built to 20 knots gusting 25.

Partly due to the difficult-to-read conditions, partly due to the intense competition between the nine boats, it was a high scoring opening to the World Championship. But most incredibly, after three races, and with a potential 27 points on the table today, just one point separates the top seven boats and two points the top eight in the nine-boat fleet.

The first race was the hardest fought with Torbjörn Törnqvist’s Artemis Racing doing well on the upwinds and Nico Poons’ Charisma edging ahead on the runs. The Dutchman’s team was first home as the Swedes dropped to fourth.

“Everyone sailed pretty well, and I managed to get a few shifts as well – it all helped,” explained Charisma’s tactician Hamish Pepper. “Artemis is going well. They had one small problem which opened the door for us thankfully and we took advantage of it.

“It wasn’t a ‘go hard right’ sort of day. There were still a few shifts coming back from the left and you had to try and join the dots. It was tough because everyone was expecting a bit more right breeze and more breeze to come, so sail selection was tricky – we were all pretty conservative; the fleet matched itself…”

Artemis Racing turned race one’s result around in the second. Hugues Lepic’s Aleph Racing led around the top mark, showing some of the same form that won her the 44Cup Cowes in August, but a gybe set launched Artemis into the lead which she never relinquished.

Andy Horton, tactician for the Swedish team, explained: “We had a great start up by the boat and sailed a couple of shifts well. Then we did what TT [Torbjörn Törnqvist] called ‘the boat handling move of the day’ – a gybe set at the top and that got us past Aleph and then we were pretty much gone.”

Horton said that generally it was a difficult day: “We were getting reports from the top mark that it was 25 knots from 30°and we sailed up the beat in 12 knots from 5°.”

Törnqvist added: “The first two races were great but unfortunately coming out of the first gybe on the last beat, when we were leading, we lost our bowsprit. It took us some time to sort that out, but these things happen. That small thing lost us three places. I’m sure everyone had similar stories today.”

In the third and final race Igor Lah’s Ceeref powered by Hrastnik 1860 won the pin, then stayed to the mid-left and eventually crossed the fleet on port to lead around the top mark.

The overall 2021 44Cup leaders then never looked back. Artemis Racing held a strong lead overall after race two, but lost her advantage with a seventh place finish in race three. Therefore, the day ends the closest it has ever been in 44Cup history, or in perhaps any sailing class, after three races.

Nominally the leader after day one is Ceeref powered by Hrastnik 1860, but with such a leaderboard, this is all but meaningless. The 44Cup Scarlino World Championship will effectively restart tomorrow.

“It is amazing. It cannot get closer so tomorrow we start from scratch, like today didn’t happen,” said Igor Lah, adding of his race win today: “The last one was great. The first was a big mistake on my side at the start, but luckily, we came back. The conditions were great – really fun. I loved it, it was brilliant,” Nico Poons said.

Of the tight overall result, he added: “That is crazy. This shows how close this is!”

Torbjörn Törnqvist: “First of all it shows the standard within the class and perhaps some of the difficulties today – it was shifty and windy, a bit all over the place. And you had to have luck also. We had two good races and one where we were dictated by the situation on the course – which does happen.”

Enjoying her first 44Cup races today was Moscow lawyer Valeriya Kovalenko on board her ARTtube. She and her fledgling team were expecting to bring up the rear in every race, but in today’s second race they finished ahead of two teams.

“Today was a great day,” Kovalenko said. “We were happy sailing especially in the second race.”

“We are young in this class, but it was a good day for us,” he said. “In strong winds it is not easy, because we don’t have practice. Overall, we are very happy.”

With a similar forecast tomorrow, racing is again being brought forward by two hours with a first warning signal at 1000 CEST. Follow live at www.44cup.org.