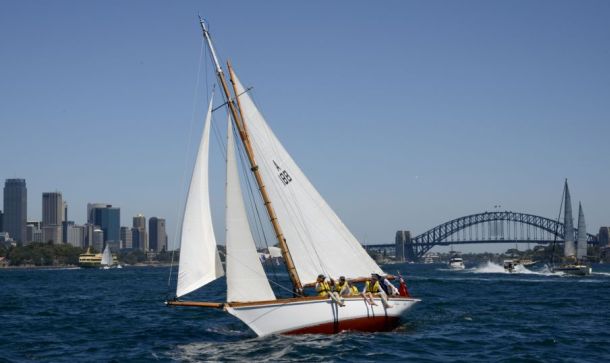 One of Australia’s oldest racing yachts, the gaff cutter Kelpie which was built 122 years ago, will contest the world’s oldest continuously conducted regatta, the 179th Australia Day Regatta on Sydney Harbour.

Kelpie is among almost 150 sailing craft, ranging from historical replicas and current state-of-the-art versions of Sydney’s spectacular 18-foot skiffs to famous ocean racing yachts, including two past line honours winners of the famous Sydney Hobart Yacht Race, that have been entered for the historic regatta races on the harbour and offshore.

Nearly 90 keelboats, including Sydney Hobart Race line honours winners Fidelis (1966) and Brindabella (1997) entered for the traditional regatta on Sydney Harbour, together with about 20 skiffs, old and new.

A fleet of more than 30 yachts will contest the short ocean race from Sydney to Botany Bay and return, headed by Patrice, winner of the IRC Division 1 of last month’s 70th Sydney Hobart.

Under the auspices of the 179th Australia Day Regatta Committee, local Australia Day regattas for keelboats and off-the-beach classes will also be held on other parts of Sydney Harbour, on Botany Bay, Pittwater, Lake Macquarie and Brisbane Waters as well as on several inland waterways.

The 179th Australia Day Regatta, first held in 1837, commemorates the first European settlement in the colony of New South Wales and the founding of modern Australia.

Kelpie is currently owned by Sydney Amateur Sailing Club members Dougal and Merrin Maple-Brown and will be skippered by Merrin in the Classic non-spinnaker division 2 of the Regatta. The two Classic divisions have attracted 28 entries of the total harbour fleet of 88 boats, indicative of the strong interest in restoring and racing older yachts.

None, however, can match the longevity of Kelpie nor, in fact, her fine lines – clipper bow, counter stern and flush decks – said to have been drawn by the famous Scottish naval architect William Fife, although there is no confirmation of this.

According to the Australian Register of Historic Vessels, Kelpie was built by in 1893 by George Ellis, a noted sailor and shipwright, in a boatshed in the Sydney suburb of Drummoyne. The Register described her as “a very early surviving example of a gaff cutter racing yacht that was built in Australia, and one of the few that survive”.

Kelpie has had some 15 different owners, including one who is reputed to have sailed the 30-footer from Sydney to Perth and back in the 1920s. In the late 1980s Kelpie was re-launched having been restored to the original hull and deck arrangement, and rigged with a modified and handier gaff cutter rig and has since been a regular feature at many heritage regattas.

Kelpie has a LOA of 9.14m (30ft) with the carvel hull constructed of teak planks, copper roved, on alternative sawn Blue Gum hardwood frames and pairs of bent flooded gum frames with a timber planked deck. She has a full keel with lead ballast and a keel hung rudder and has a displacement of 5.65 tons (4 tons Thames Measurement).

The 179th Australia Day Regatta short ocean race, conducted by the Cruising Yacht Club of Australia will start from Watsons Bay, just inside Sydney Heads, at 11am. The Harbour racing, conducted with the co-operation of the Royal Sydney Yacht Squadron and Sydney Amateur Sailing Club, will start and finish near the flagship HMAS Canberra, moored off Rushcutters Bay.

Australia Day 2015 celebrations on Sydney Harbour tomorrow will begin with the arrival of three P&O cruise ships, Pacific Pearl, Pacific Dawn and Pacific Jewel at 0700 hours. At 0730, the WugulOra Ceremony will see the raising of the Aboriginal and Australian flags on Sydney Harbour Bridge.

At 12 noon the Salute to Australia ceremony will take place mid-harbour with dignitaries aboard HMAS Canberrra. Following this will be the Australia Day Parade of Sail from 1230-1400 and the Tall Ships sail from Bradley’s Head to the Harbour Bridge.