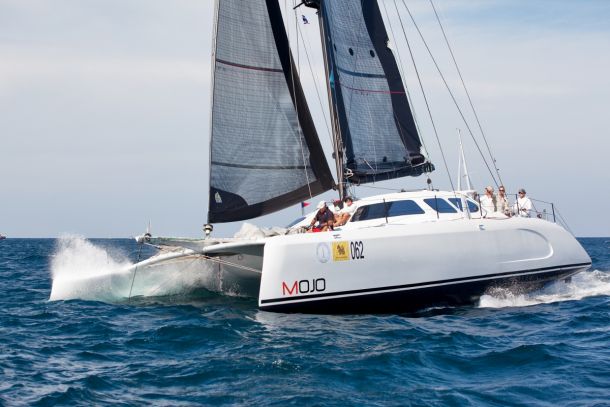 Entries from across Australia for the 9th SeaLink Magnetic Island Race Week are steadily flowing in as the close of entries date looms large on the horizon.

There are seven divisions on offer for this year’s regatta which is being held from August 27 to September 1 – IRC, Performance Racing, Cruising Spinnaker, Cruising Non Spinnaker, Classic Yachts, Multihull Racing and Multihull Cruising. Further details of these divisions and online entry which closes on August 21 are at www.magneticislandraceweek.com.au

The Multihulls are the newest to see a surge in entries with Ian Johnson’s Lightwave Salacia kick-starting the Multihull Cruising Division.

In the Multihull Racing Division entries are in from NSW and Queensland. The newest is Peter Wilcox’s Mojo. Since being launched in 2011 the Schionning G-Force 1500  has competed in the 2012 Brisbane Gladstone Race before being taken up to Asia to compete in Thailand’s Phuket King’s Cup and Malaysia’s Raja Muda and Langkawai race weeks.

“Flipping oath,” Wilcox joked. “Out on the water it’s take no prisoners, but on the land we are mates.

“Andrew was the forerunner up in Asia and we followed in his footsteps only to catch him up there and take out the races that he had taken out the year before,” Wilcox added.

Since returning to Australia Wilcox has campaigned his catamaran in the 2015 Surf to City to finish second on OMR and third on PHRF.  He is now busily tweaking his catamaran in preparation the SeaLink Magnetic Island Race Week. He has made some changes to his sail plan and some of the deck systems which has positively changed his OMR handicap.

There are no entries as yet for the newly introduced Classic Yachts Division. SeaLink’s Queensland General Manager and Race Committee Chair, Paul Victory, expects that over the coming four weeks a handful of entries will appear. “It’s always a challenge introducing a new class and then waiting anxiously, hoping that there is enough market interest to make it a permanent addition to the regatta program. We still have our fingers crossed that the Classics will show up to discover this is the perfect location for them to participate in some pleasant rivalry with their fellow class-mates,” Victory said.

In the IRC Division entries are in from Victoria, New South Wales and Queensland. The latest entry is Wayne Millar’s Zoe. He has been in semi-retirement for the last few years, but with David Currie’s Ponyo, Peter Sorensen’s The Philosophers Club and Bob Steel’s new Quest in the line-up, the Townsville skipper has been lured back to the racing scene.

Performance Racing has attracted entries from New South Wales and Queensland with Royal Prince Alfred’s Rob Curtis and Glenn Tailby’s Kerr 11.3, Kerazy, travelling the farthest. They will start their northern campaign this weekend with the Land Rover Sydney Gold Coast Race, before going on to compete in the Airlie Beach Race Week and then up to Magnetic Island.

The Cruising Spinnaker Division retains the title of the largest entry list to date with entries from New South Wales, Victoria, Tasmania, South Australia and up and down the Queensland coast. Many of the these entrants have previously enjoyed the hospitality of the SeaLink Magnetic Island Race Week including Michael Phillips’ Poppy from Adelaide, Geoff and Jen Fogarty’s Ruby from Pittwater and John Kint’s Bundaberg from Melbourne.

“The large interstate fleet supports the Race Committee’s work and the Queensland Government’s involvement through Tourism and Events Queensland for a tourism led regatta, with so many participants travelling from interstate to Race Week and the broader events of Sail Townsville,” Victory added.

Entries close on August 21. All entries will in the running to win two flights to Townsville and seven nights accommodation in a two-bedroom apartment in the stunning, five-star Peppers Blue on Blue Resort on Magnetic Island for next year’s 10th SeaLink Magnetic Island Race Week.