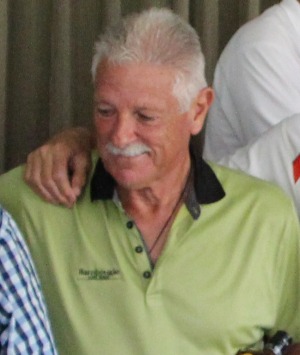 Members of Royal Prince Alfred Yacht Club are in shock following the tragic death of a well-loved club member in a freak accident during racing on Saturday.

David Booth, known to everyone at the club as Boothy, was a 72-year-old real estate agent who had been a fine golfer in his younger years before discovering a love of sailing. He sailed at least twice a week, doing twilights and Saturday afternoon races.

Boothy was crewing on board Pacesetter, an 11m Class yacht, during Saturday's club race. As is often the case, the top mark was very congested with a fleet of around 50 taking part.

According to reports, Pacesetter had rounded the mark and the crew was concentrating on setting the spinnaker for the first run when she collided with the Couta boat Emily which was approaching the mark. It appears that no-one on board Pacesetter saw the Couta boat, despite the crew of Emily calling out.

David Booth was killed in the freak accident and another 72-year-old, Billy Stevens, suffered a serious leg injury and was thrown off the boat.

A member of Emily's crew jumped into the water and supported Billy until the club safety boat arrived and rushed him ashore, where he was taken to Royal North Shore Hospital.

The senior doctor at the scene, Alan Garner, told the Sydney Morning Herald that Billy had sustained a severe wound to his right leg just below the knee and had almost bled to death.

“He had quite a severe leg injury. It was almost severed. His problem was that he was in the water bleeding for five to ten minutes,” Dr Garner said. “They pulled him out of the water and put a rope tourniquet around his leg but he had lost a lot of blood and was semi-conscious.

“We gave him two units of blood before transporting him to hospital. He had almost bled to death. It was the combination of the big wound and being in the water so long that the blood didn't clot.”

Latest report suggest the leg has been saved and Billy is in a stable condition.

The club held a board meeting on Sunday morning to discuss the accident and released a statement shortly afterwards.

Commodore Ian Audsley said the club would endeavour to offer support to everyone affected by the crash.

“Counselling is being arranged and anyone, regardless of their involvement is welcome to take up that service,” he said. “Our thoughts and prayers are with Suellen and David's family and with Billy's wife Di and their family.”

Yachting Australia President Matt Allen was saddened to hear of the incident, saying, “I’m sure I speak for many members of the sailing community in offering our sympathies to the family and friends of David, who we lost on Saturday.  A number of his fellow sailors have spoken to me in the past day or so, he was well regarded within the community at Pittwater and also as part of the Race Committee at Hamilton Island and will be missed by many.

“We also offer our good wishes to Billy for a speedy recovery from his injuries and hope he is home with his loved ones soon.  There are a lot of people at Newport who are looking forward to seeing him at the Club in the not too distant future.

“It would have been a distressing situation for fellow sailors, officials, staff and volunteers at The Royal Prince Alfred Yacht Club on Saturday and we thank them for their efforts and assistance, I’m sure they will rally together to support each other during this difficult time.  We also express our gratitude for the work of emergency services personnel who were quickly on the scene and rendered assistance,” Matt added.