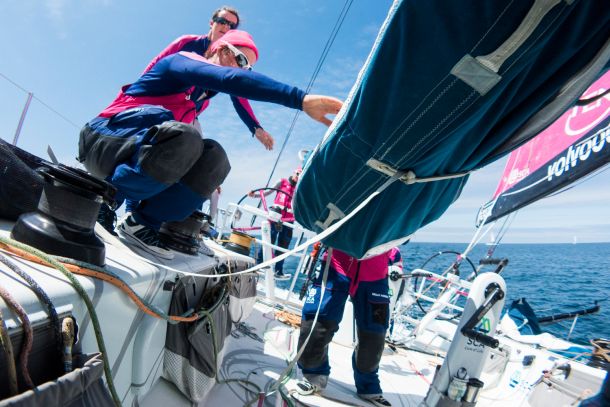 Team Alvimedica (Charlie Enright/USA) were protecting a 9.6-nautical mile (nm) lead over Dongfeng Race Team (Charles Caudrelier/FRA) with 233nm still to sail to the final destination of Gothenburg, after leaving a hugely successful pit-stop in The Hague at midday yesterday (see panel above from 0940 UTC/1140 local time).

In normal circumstances, that would be quite a handy lead with only a relatively short distance to sail. However, the latest weather forecast is offering little comfort for Team Alvimedica’s 30-year-old skipper, Charlie Enright, as he chases a first leg victory for his young team. Forecasters are predicting light winds followed by a front, with winds from the northeast, to hit the fleet, which could potentially shuffle the pack.

The finish in Gothenburg was orginally estimated to be in the early hours of Tuesday morning, but better-than-expected conditions have hurried the seven boats on their way from the Dutch coast. Arrival could now be as early as midday tomorrow (June 22).

Victory in the Swedish port would be a fitting reward for Team Alvimedica following their impressive improvement throughout the race. They have chalked up three third places in the first eight legs so far and have sailed impeccably since leaving Lorient, France, last Tuesday, setting the pace for their rivals.

The Turkish/American boat’s Onboard Reporter, Amory Ross (USA), noted early today that the mood of the crew was of barely suppressed nerves and excitement. “As demonstrated many times in this race, no lead is too safe and the winds look first to lighten quickly near the top of the Danish peninsula,” he wrote in his daily blog. “In all likelihood, the fleet will compress there with a full race restart for the final sprint to Sweden. It is obviously not what we want, so we are working particularly hard to hang on to a passing weather front that may be able to carry us comfortably to the finish.”

Behind him, Dongfeng Race Team were hoping that MAPFRE (Iker Martínez/ESP) could snatch third place back in the leg from Team Brunel (Bouwe Bekking/NED) from their position just under 0.6nm behind the Dutch boat. Bouwe Bekking’s crew had begun the ninth and final leg in second place behind champions-elect, Abu Dhabi Ocean Racing (Ian Walker/GBR), with Charles Caudrelier’s Dongfeng Race Team two points behind him.

The Chinese team need to finish two places in front of Team Brunel to level the overall points, leaving the in-port series to break the tie.

The 10th and last race in that series will be on Saturday, June 27 with the Inmarsat In-Port Race Gothenburg.

MAPFRE also have plenty of incentive to move up a placing at least. If they finish fourth in the leg and Team Alvimedica win it, then Enright’s men will steal fourth placing overall from the Spanish team.

Meantime, at the back of the fleet, both sixth-placed Team Vestas Wind (Chris Nicholson/AUS) and Team SCA (Sam Davies/GBR) were keeping a sharp lookout for the easing of conditions that could yet put them back in the hunt for a podium place with a fleet compression.

After nearly nine months and 38,739nm of sailing, visiting every continent and 11 ports along the way, this potboiler looks set to keep the fans guessing right to the end.