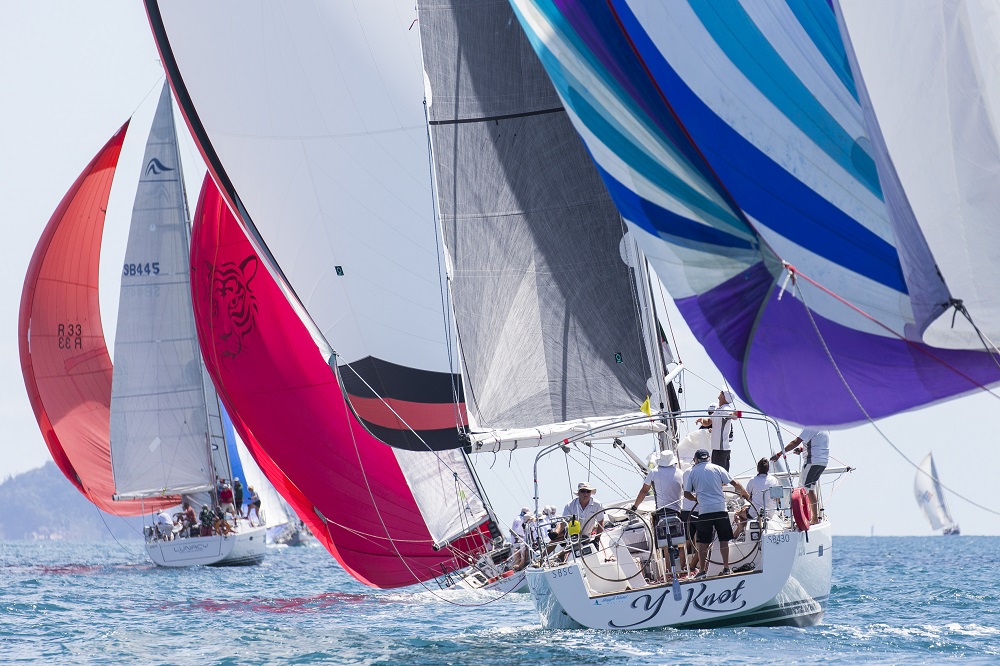 Paul Clitheroe finally got the ‘Balance’ right today – missed all the holes to win the final race in IRC at SeaLink Magnetic Island Race Week today. But it was David Fuller’s Vamp, which already had the series stitched up yesterday and today he added to a second place to his tally of four wins and a further second place.

Fuller, from NSW, is as pleased as punch, sailing his Corby 49 for the first time at the Townsville Yacht Club (TYC) organised regatta.

“A beautiful breeze for the final day, with racing starting on time. It reached a maximum of 12 knots. It was consistent all day – no holes – no tricky shifts. A Fitting finale,” Fuller said. The two bigger boats got away in their conditions and Balance showed her true colours today – it was TP52 weather.”

Fuller and his crew have loved every minute of their time here. “It’s a great regatta. We’ll definitely be back. Events like this are precious – especially for someone of my vintage. You can’t even plan a year ahead,” the 75 year-old said.

Paul Ley’s Pilgrim from NSW is the SeaLink Spinnaker Division 1 winner. They have sailed well all week, so deserved their second place today to take the overall win, beaten to the punch by Sam Pavic’s Beneteau Sense 500, Little Miss Sunshine.

The crew on Ley’s Kaufman 58 included Peter Lowndes, who normally sails his own boat, Wine Dark Sea, here and who has just missed a win a couple of times – but he was smiling today.

No slouch, Lowndes helped Ley to the boat’s win, along with navigator, Matt Wenke, who, Ley said, “II want to give him a special mention. He put us in all the right places. My crew worked so well together this week; it’s a win for all of us.”

Ley also thanked the handicappers. “They don’t get praised often, but going into the day, we were tied for first place – it was ours too lose. Five boats could have won the division – that’s good handicapping.”

Pilgrim is a charter boat that spends winter in Queensland and summer in Sydney. “We have the best of both worlds and I have a home on Magnetic Island and one in Sydney,” Ley said.

“It’s a great old boat, she still shows the modern boats a thing or too.” There were some truly beautiful boats in this division – old and new.

Gary Anderson’s Lunacy, a Hanse 445, won Division 2 from Rob Rainsford’s Hanse 40, Y Knot, keeping in the family somewhat, not only design wise, but because both are from Victoria.

“Weather was frustrating, our boat likes a bit of breeze. But the organisers did a good job getting us around the course each day.

“This is our third time at Magnetic Island and we are all Sandringham Yacht Club crew,” said Anderson who will move from Rear-Commodore to Vice Commodore at the next election. On his crew too is SYC past Commodore Chris Carlile and Ashley Trebilcock, the Commodore elect.

“We are very excited; it hasn’t really sunk in yet. I will when we’ve finished packing the boat up and get to the prize giving,” he said.

But it was a Townsville Yacht Club boat which got the gun today, when Justin Van Stom’s Cal 36, Calico pipped another Townsville boat by just 20 seconds – the popular Soul Sister, owned and skippered by Donna Dewhurst.

It was a long day on the water for some of the Multihull Division. Eventually it was a local that took out first overall, when Graeme Etherton’s ‘The Boat’ won the final race to claim the crown from Dennis Coleman’s Mistress and the all-female crew on the Sharon Ferris-Choat skippered Ave Gitana from New Zealand.

The Boat, a Crowther Windspeed 32 cat turned the tables on Mistress, also from Townsville, which Etherton finished second to last year.

Organisers at Townsville Yacht Club thank SeaLink Magnetic Island Race Week sponsors for their ongoing support. They also thank competitors and officials alike, with a special thank you to the volunteers, who give up their time each year to help out. What and where would we be without them?

All other results will be posted to the website when available at: www.magneticislandraceweek.com.au/