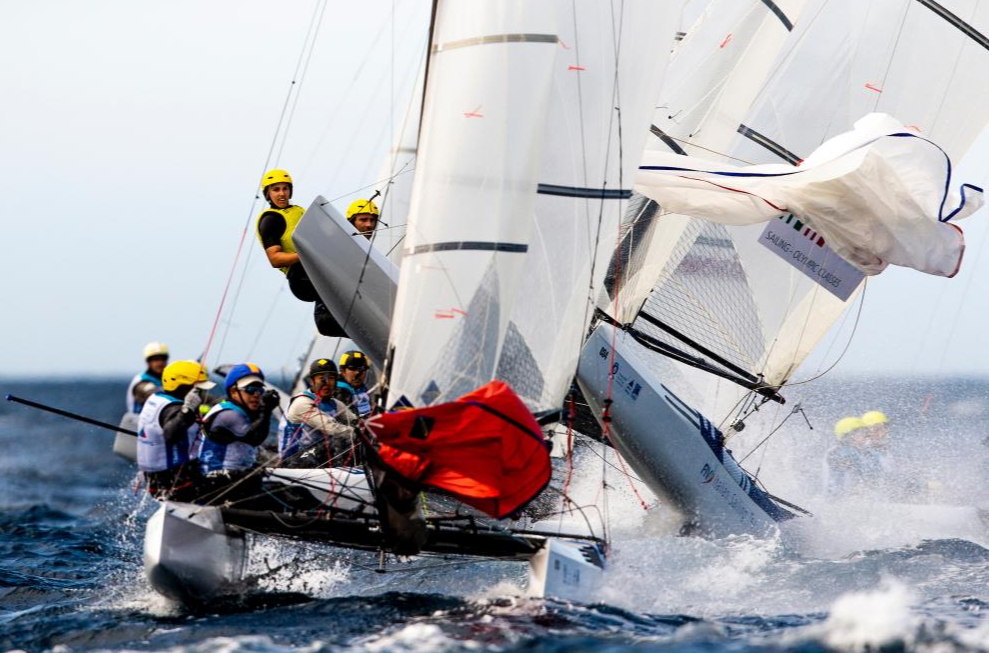 Italy’s Vittorio Bissaro and Maelle Frascari have thrived at the Hempel World Cup Series Final in Marseille, France, finding form that has been unmatched in the 24-boat Nacra 17 fleet.

Meanwhile in the 49er, Spain’s Federico and Arturo Alonso wrapped up gold ahead of the Medal Race after another day of dominance.

Fleet racing in the 49er, 49erFX, Nacra 17, Open Kiteboarding and RS:X fleets concluded on Friday with the scene set for their Medal Races, which will be live here – https://youtu.be/a6PBXzrH5P4, on Saturday 8 June.

From two further Nacra 17 races, Bissaro and Frascari continued their excellent run of results in the top five with a first and a third that gives them a 16-point advantage heading into the Medal Race.

Friday’s racing commenced at the earlier time of 10:00 local time. A strong morning breeze from the south east came in at 13-16 knots allowing a good number of races to be completed before it built. As reports of gusts up to 30 knots were recorded, the ten Olympic fleets headed back to shore to wait and see if the wind would decrease.

Meanwhile, the Open Kiteboarding fleet roared across the racing areas, fully powered and completed their four races. As the wind failed to decrease, competition was cancelled for the day at 14:15 local time.

Bissaro and Frascari have dominated the 11 Nacra 17 races in Marseille, winning four, claiming three seconds and a third, fourth and fifth. An eighth, which they discard, in the opening race of the series is their worst result of the week.

“It’s been a lot of fun,” expressed Bissaro with bright eyes and a vibrant smile. “We just love these conditions. The possibility to race in these conditions is a pleasure for us. We just can’t wait to get out there in this type of breeze and have the opportunity to race.

“To be honest, the fact that we can go faster than others make me really love racing. I also love the reaction of the boat. The Nacra 17 is a very complicated boat to sail in this type of breeze. It is very demanding and to be able to control this boat in this breeze is very rewarding and we love it.”

Just one year ago, Bissaro and Frascari watched their compatriots Ruggero Tita and Caterina Banti clinch the Nacra 17 World Cup title as they settled for silver. This year, the tables have turned and Bissaro and Frascari have a 16-point advantage over John Gimson and Anna Burnet (GBR) and are 25-points clear of Tita and Banti.

Gold is within their reach and Bissaro is pleased that he and Frascari have found form to come out of the shadows of their national rivals. “We had a very good training camp this winter where we were able to close the gap between us almost completely,” he commented. “This week we’ve had a better week. They had some bad results but they were very fast yesterday and today. The difference in level is not as high as the results are showing.”

Just one Italian Nacra 17 team will be at the READY STEADY TOKYO – Sailing, the Olympic test event, and at the Tokyo 2020 Olympic Games and the rivalry between the two crews is flaring up.

In the first race of the week, there was no love lost as Bissaro and Frascari protested Tita and Banti. The result was a disqualification for Tita and Banti. “It was a very standard thing,” explained Bissaro. “They tried to cross on port in front of us. We were on starboard. We decided that, considering the selection for Tokyo is getting tighter and tighter and we are getting closer to the Games, it was not a good idea to give them a present. We considered it would be fair enough to protest them and let the jury decide. We protested on the water and protested ashore and they were penalised.”

Tita and Banti bounced back from the disqualification, claiming three races wins and are third but the possibility of gold has disappeared because of the points difference.

The odds are firmly stacked in favour of Bissaro and Frascari and the helm is hoping it catches the eyes of the Italian Federation, “The federation will look at this regatta as one of the events to decide who will go to the test event but it’s not written down anywhere. We just try to do our best in training and then on the water in racing to help them decide.”

Spain’s Federico and Arturo Alonso clinched 49er gold ahead of the Medal Race after another outstanding day. Their 2-1-2 scoreline has given them an unassailable 27-point lead over Austria’s Benjamin Bildstein and David Hussl.

The Spaniards have finished outside of the top three just once all week, enjoying the strong breeze and finding an unrivalled edge.

Sebastien Schneiter and Lucien Cujean (SUI) are ten points off the Austrians in third but will have to keep an eye on five racers, who can mathematically take the bronze medal away from them, in the Medal Race.

Julie Bossard and Aude Compan (FRA) will take a four point lead into the 49erFX Medal Race. Poland’s Aleksandra Melzacka and Kinga Loboda kept their hunt for gold alive by winning two races on Friday to reduce the gap on the French. Any one of four teams behind the two leaders could grab bronze in the Medal Race.

Italy’s Mattia Camboni was knocked off top spot in the Men’s RS:X after his form dropped. Camboni had been at the front of the fleet all week long, leading overall from day one. However, a 12-(16)-4 scoreline saw him drop down to fourth overall.

His loss was Piotr Myszka’s gain. The Polish racers 6-2-3 scoreline pushed him up first overall but the points at the top of the fleet are close. Myszka leads on 26 points and he is followed by Daniele Benedetti (ITA) on 27, Pierre Le Coq (FRA) on 29, Camboni on 32 and Giard on 33. All of the top five are in with a shout at gold on Saturday.

Lilian de Geus maintained her advantage in the Women’s RS:X after another consistent day. A first, second and a fourth gives her an 11-point lead over Saskia Sills (GBR) heading into the Medal Race. Flavia Tartaglini (ITA) is four points off the British racer in third.

In the 470 fleets, Mat Belcher and Will Ryan (AUS) and Hannah Mills and Eilidh McIntyre (GBR) held on to their leads in the men’s and women’s divisions.

Belcher and Ryan, experts in strong breeze, won the opening race of the day and backed it up with a second. They have moved 15-points clear of Jordi Xammar and Nicolás Rodriguez (ESP). Anton Dahlberg and Fredrik Bergström (SWE) won the final race of the day and are third.

Like the Australians, Mills and Clark also won the opening bout and followed up with a fifth. Camille Lecointre and Aloise Retornaz (FRA) picked up a 2-1 scoreline and reduced the deficit between themselves and the Brits to just four points. Both teams are well clear of the chasing pack with those from third to ninth all fighting for the final podium position.

Two Finn races were completed and Andy Maloney (NZL) managed to put some daylight between himself and his national rival Josh Junior. Maloney’s 4-1, compared to Juniors 2-6, has given him a six point lead with three fleet races remaining.

The Laser and Laser Radial fleets were scheduled for later on in the day and as the breeze picked up, they were unable to get out and race. Ryan Lo (SGP) and Viktorija Andrulyte (LTU) lead their respective fleets.

Medal Races will start from 12:00 local time on Saturday 8 June and will be live here – https://youtu.be/a6PBXzrH5P4. The remaining fleets will start at 11:00 local time and complete fleet racing before their final races on Sunday.