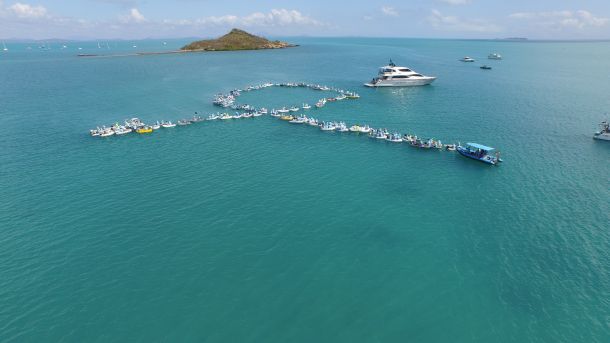 SICYC members raft up in a logo for prostate cancer with Shag Islet in background. Image courtesy Brock Davis.

Cruising Helmsman attended the weekend-long party as part of its continued support for the 'exclusively, non-exclusive' yacht club. Over 160 boats anchored in the Whitsunday waters of Gloucester Passage around the eponymous Shag Islet. Many others booked units at the hosting resort of Montes Reef and next door's Cape Gloucester Resort.

Over 800 people stayed for a weekend of festivities enjoying the chance to mingle with so many like-minded cruising sailors. The SICYC provides the opportunity to be a member of a yacht club without the annual cost of large membership fees as this yacht club has no clubhouse.

The designated charity for the SICYC is the Prostate Cancer Foundation of Australia. Over the previous six years the SICYC has been running the Rendezvous it had raised over $170,000 for prostate cancer research and awareness in Australia. As a sign of how important this fund raising effort is to the PCFA, Professor Judith Clements attended the Saturday morning raft up to receive numerous cheques and to thank the cruising community for its continuing efforts.

Professor Clements is a world-recognised leader in prostate cancer research. Her attendance at the morning raft-up saw around 160 boat tenders raft together to form the logo of the PCFA. Clements and other dignitaries watched from the comfort of the Norseman. Abell Point Marina owner Paul Darrouzet's own boat. Darrouzet took the opportunity to personally present Professor Clements with a cheque for $10,000.

While the numbers are still being tallied it is believed this year's Rendezvous will break the $80,000 fund raising mark. This easily eclipses last year's record of $70,000. An amazing effort by the organisers, volunteers, supporters and, especially, all the vice-commodore members of the SICYC.

This was a pleasing result as boat numbers were slightly down due to extreme tides experienced this year at the Passage, making it too difficult for some members.

The four-day party ran on a 'Swingin' sixties' theme culminating in the regular Pirate Party on the Sunday.

There will be a complete report in November's Cruising Helmsman.

The photo here was taken by a camera drone flown by Brock Davis, many thanks for the photo submission.