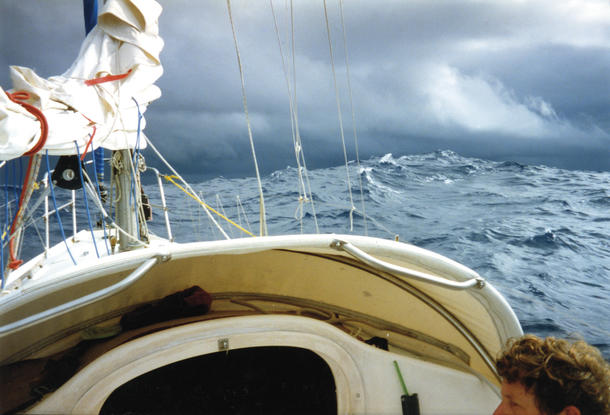 I lay in my bunk gripping the sides with white knuckles, feeling the painful legacy of this rough passage on my upper left arm.

The bruise, now looking very impressive, happened last night when I was in the cockpit having a wash. Our small 29 foot Duncanson, Shearwater II, did a mighty broach and I was thrown sideways, catching my arm on the hatch way entrance.

It is 0300 and outside it is soupy black. There is no moon and the clouds are obscuring the stars.

We are passing over a sea mount on our voyage from the Cocos Keeling Islands to Rodrigues. It will take us five or six hours to pass over this mountain under the sea where the depth has suddenly risen from 5,500 metres to 1,500ms, causing very confused, rough seas. We are being tossed about relentlessly as a result.

In a way, I am happy that it is dark. I cannot see the ugly, raging sea.

I feel anxious, hoping Shearwater II will stand up to the rough conditions. The weather report, when we left Cocos Keeling five days ago, had sounded promising with one high over Australia and the other over Madagascar. I was reminded of receiving a similar weather forecast when we left New Zealand to sail to Tonga a few years ago. We ended up hove to for four days when an unexpected gale hit us.

At least now, almost half way through our voyage, I had overcome my seasickness.

Thirty miles out from Cocos while on a three quarter reach with a 15 to 20 knot south easterly, we had caught a yellow fin tuna. John had used the hacksaw to cut it into ten fillets. I cooked them all but, without refrigeration on board and feeling that tad bit queasy, we ended up having to throw half of it away.

Meals were a challenge. It took me half an hour to peel our last onion, six potatoes, half a small butternut pumpkin and four garlic buds. Rogue waves would hit just as I was preparing dinner.

We soon discovered that we had to have the lower storm board in after water filled the cockpit and down into the cabin, drenching the quarter berth and spraying the chart table.

Each day we were making good mileage, breaking our record on day four when the log read 142 nautical miles. We actually made good 157 so that meant that the current was giving us about three extra hours for free!

Day six was sunny and very pleasant, especially after we put a third reef in the mainsail. For the first time in days we were able to sit outside in the cockpit without getting drenched.

Until then we had spent virtually all our time inside, just peeking out every fifteen minutes to scan the horizon for ships and to check the rigging and sails. Due to its consistent, unflagging hard work, the self-steerer rope
had to be reknotted to stop it wearing through.

Our enjoyment of being able to spend time in the fresh air was short-lived. Day seven was rough with intermittent rain squalls.

With the lee cloths up, I lay in my bunk clutching the sides, feeling very tense as I got tossed about. That night, however, the wind dropped right out and we motored for five hours in one metre seas.

At dawn the next day we reached our half way mark. We were rolling along in a light easterly with the jib poled out and the front hatch open. We shared our last apple.

The only way we could stop our salt ridden clothes from feeling permanently damp was to wear them.

With the light wind going more southerly on day nine, we were driven crazy with the mainsail slatting and the traveller banging. It made the whole boat shudder. We took the pole in, reefed the jib, double reefed the main and altered course.

Another reef in the main and another drenched soaking heralded our first gale since leaving Cocos. At least spotting a ship and conversing stiltedly over the radio with its Asian sounding crew took our minds off the raging weather.

Our reference book for the Indian Ocean mentioned an average of ten days of gale a month in this area. All would be quiet for a
few minutes, then bang! Another wave would hit the side of the boat with tremendous force.

Down below, with the storm boards in, felt like being in a snug cocoon. Because of the violent motion we did not attempt to do anything except look outside regularly while on watch.

It was at this time that we had an “aha” moment. We no longer wore clothes at all, let alone salty ones, apart from our life jackets and harnesses. The cabin was littered with damp articles of clothing that simply stayed damp but now, we no longer added to the mess.

Our meals comprised of whatever was easiest to get. Today, a tin of something with two minute noodles and a cup of black, sugarless tea made from water heated up on our two burner methylated stove.

Another day we had tomato soup and frankfurts. It was an ordeal, heating soup on a gimballed stove. The saucepan swings to and fro without spilling its contents but pouring the soup into cups is a challenge: boat rolls and half soup ends in sink.

End up being almost too grumpy to eat!

If preparing a meal took skill, washing up was yet another challenge. So that water did not end up slopping from the sink to the floor, I left the sea cock open and, using our sea water pump, washed, dried and put away one dish at a time. A long, laborious job in between being thrown backwards and forwards with the rolling motion.

It was at the height of our first gale, just as I had managed to fall asleep, that we had a bad pooping.

Shearwater II was thrown sideways as an enormous amount of water flooded the cockpit, setting the life buoy and torch adrift. The loose ends of all the sheets were swept overboard as well as a couple small containers.

John managed to retrieve the essentials. The motor which had been running to charge the batteries stopped suddenly for no reason. John thought that perhaps dirty fuel had been shaken up. Fortunately the sheet ends were not long enough to tangle in the propeller.

As the gale continued, I continued to give myself self-talks, trying hard to be positive and uncomplaining. I found comfort in the words of Ann Davison, the first woman to sail solo across the Atlantic when she wrote: “the sea is an alien element; one cannot live in it or on it for long and one survives that little time by one’s own wit and judgment and the grace of God.”

With 289 miles to go, I was resigned to the rough, rolly conditions and felt ecstatic that the gale had finally abated. The opened front hatch allowed fresh air to circulate inside our damp, mouldy cabin.

A week had passed since we had experienced such pleasant sunny conditions. We were now sailing at fifteen knots in south-easterlies with two to three metre seas.

The only food left on board that I was looking forward to eating was rhubarb. My other favourites – apples, smoked mussels, rice crackers, potato chips and dill gherkins – had all been consumed.

With less than fifty miles to go to reach Rodrigues,
we experienced yet another gale. On hearing the waves bear down on us, sounding like a train, I knew it was the signal to grip the sides of my bunk for I was about to be tossed from port to starboard to port to starboard until poor little Shearwater had her equilibrium restored again.

Later that afternoon, it was pure and absolute bliss to be tied up in the flat waters of the lagoon. As John pulled up our self-steering gear to stow it, the rod that held the paddle and the pin sheered off and both paddle and pin fell ten metres to the murky bottom. He quickly dropped the anchor over the stern and as soon as we were cleared in by Customs, we borrowed a scuba tank from a neighbouring lone sailor and I was able to swim down the chain and retrieve them.

In summary, our total distance covered was 1985 nautical miles on a course of 256 degrees true. Winds were from the ESE to SE varying from 15 to 35 knots
with gusts to 40 knots.

We passed through three time zones which sometimes caused confusion as to whose three hour watch it was. Our total elapsed time was fourteen days, five hours and thirty minutes.