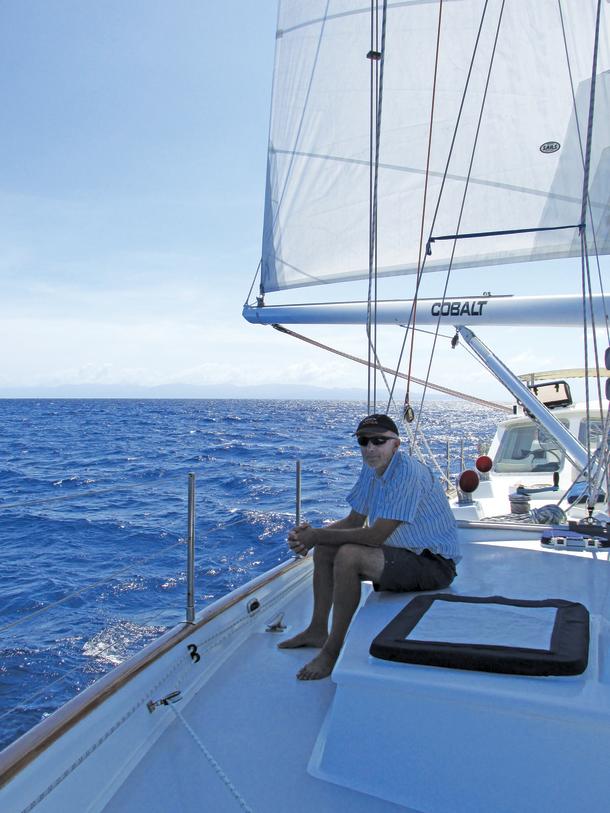 The Completing our Customs Inward Report: small craft, to return to New Zealand upsets me. Why? Because in the hull composition section and there are many sections this is for NZ remember, we have to tick the box marked ‘other’.

A surveyor, making an inspection for insurance purposes earlier this year, was a whole hour into the expensive exercise and had actually completed the hull inspection, when he lifted a floor panel and exclaimed, “oh, she’s wood!”

Cobalt, as our observant surveyor discovered, is built from kauri, triple-planked diagonally by Barry Jones, a skilfull craftsman in Matakana NZ in mid 1980s. The only wood visible externally is a varnished teak capping. The hull, as demonstrated by our surveyor, could easily be thought of as GRP: no seams show or leak, as on our previous carvel-planked wooden boat, Willy Bolton, a 52 foot Buchanan design ketch.

Willy Bolton was built from solid teak in Hong Kong’s Chang yard, when affordable skilled labourers and rain forests were still plentiful, back in the 1970s. When we bought Willy Bolton, in New York in 1990 during a blood rush to the head, her hull was varnished. It was a foolish purchase, led entirely by the heart, while our heads echoed our bank manager screaming, “noooooo!”

We were hooked by the classic lines of her design, the mellow sheen of aged teak and sheer craftsmanship in her build. Wooden boat addiction is hard to resist.

Some people never learn: the boat we were replacing was a labour intensive 42 foot, twenty ton iroko Hilyard, sold due to concerns of pig iron ballast in the bilges, tankage difficult to access and replace and a feeling that she was not a suitable boat for our planned round the world voyage.

A good call, as it turned out: sadly, she was wrecked off South Africa in 2004. A heartbreaking photo shows those tanks now only too easily accessible strewn on the beach, alongside scraps of lovingly varnished woodwork and the carefully maintained engine.

Truthfully, we had a brief 18 month flirtation with a GRP Warrior 40, bought at the London Boat Show specifically for a three month voyage from UK to Azores and back. We just never connected with her. Unable to pick her out from other look-a-likes at anchor, we quickly sold her. So back to wood, with a vengeance.

Willy Bolton was now ours, against our better judgement, by delivery across the Atlantic, at huge expense, to our home port of Weymouth in SW England. The boat became a major focus of our lives for the next decade. Second only of course, as they may read this, to producing our two beautiful daughters: Elle and Jess.

Our delivery crew complained that the deck leaked like the proverbial sieve plus they motored with such gusto, possibly to get home and dry, that the engine needed rebuilding. So the refit began.

Engineers in Elephant Boatyard took care of rebuilding the six cylinder Perkins, but this left few funds available for the redecking. Various boatyards planning to use new teak, quoted more than the boat’s purchase price. The 1990 US dollar/pound exchange rate was so low, we had convinced ourselves that she was a bargain; particularly with the favourable survey, which had not picked up either the leaking deck nor the engine defects. At least he spotted she was wooden.

The only option was DIY: reading books and magazine articles, visiting libraries, remember those? Then, compiling lists galore, Anthony planned the project.

Willy Bolton was sailed to her new Weymouth home. Masts were removed with a large crane, causing the first of many local stirs by blocking traffic in narrow cobbled streets off The Cove. Anthony spent weekends clearing the decks of every fitting. Robert Tett, now a carpenter in Sydney, then a Dorset school leaver, spent many hours cutting out deck plugs to expose the screws. This is possibly why he moved to Australia.

Anthony then motored round to a mooring, fortunately way out in Portland Harbour, where he spent a very noisy summer removing every one of those 2000 screws with an impact driver and battery drill. On a good run he removed forty an hour.

Come autumn and cheaper rates, it was back to Weymouth Harbour, where a team of friends: Arthur Meech yacht guru and Ken Tett, Robert’s Dad and master carpenter, helped to remove the teak planks and supporting ply, which had flaked like pastry. New marine grade ply was laid.

The teak planks were run through a thicknesser. Chaos was narrowly averted here when, after just half a dozen, they realised that this also removed the felt-penned identification labels, allowing them to be replaced in the original position.

Miraculously for September and October in England, there was no rain for six weeks. This is a record. Not trusting their luck, after each working session the trio protected their work with a cumbersome tarpaulin. Once the deck was laid and seams caulked, winter was spent refixing the many deck fittings.

Come spring, new masts were craned on. We were by now old friends with the locals who watched our madness with interest; nobody minded cranes blocking their road and they even brought us mugs of tea. Tourists strolled by for a chat, repeating the same questions daily: I considered making a bulletin board, or at least applying for a Tourist Board grant, as a new local attraction.

It is important, we believe, when spending so much energy, time and money on major restoration projects, to use the boat as soon as possible. The following summer, we were able to sail Willy Bolton, still a work in progress, across the English Channel to France. We were surprised, arriving back to the UK, to find ourselves in Torquay, when we believed we were entering Dartmouth! A town twelve kilometres along the coast. The compass clearly needed to be swung. It is hard to imagine that sort of navigational fun, in these days of GPS. But we enjoyed Torquay.

Finally, all boat projects were completed. It helped that Anthony was self-employed and could fit in boat projects around work commitments and I was a music teacher, with weekends and long holidays; varnishing could distract me from the joys of Year 9 blues or the choir singing flat.

In 2000 we sold everything and set sail from UK in a completely restored Willy Bolton, along with seven and nine-year-old daughters and 100 Beanie Babies aboard.

The boat looked great. Anthony had devised a maintenance routine: Deks Olje for the coachroof and hatches, International Goldspar gloss varnish for the capping.

We rollered white paint on the hull every two years in boatyards in Prickly Bay, Grenada and Nelson, New Zealand. ‘A stitch in time’ is a good adage for wooden boats: easier to varnish and paint before it becomes necessary so preparation can be kept to a minimum.

I sewed canvas covers for the hatches and an overall shade to protect us and Willy Bolton from fierce tropical sun. Again, prevention is better than cure.

It is no coincidence that we became good friends on our voyage across the Pacific with Americans Amy and Phil, aboard Iwalani. As Amy wrote in our visitors’ book: “The only other wooden boat in the entire Pacific it seems.”

Their’s was freshly built by Phil in Maine, based on a traditional gaff-rigged design, complete with baggywrinkles, ratlines and bowsprit. Stewart the cat was of more interest to our daughters.

Wooden boats generally attract massive interest, especially as the numbers decline. In Nelson, while we were busy painting the hull, we met Alan who had owned one of only nineteen sister ships and had the photos to prove it.

Next day, a ute pulled up and a voice called out “is that Willy Bolton?” He had recognised her, even without a name on the hull, having been at her launch party in Hong Kong.

A Frenchman, Claude, read my travel articles and e-mailed us; he had been up the Amazon in her. Robin, in Savu Savu, Fiji, called us on VHF, he too had owned a sister ship. Craftsmen-built wooden boats provoke strong emotional attachments.

I cried when we sold Willy Bolton after 20 years, to move onto the next project. She had been part of our family.

Now, after nine years, Cobalt has the same effect on us. Our maintenance routine is less demanding but fellow sailors still occasionally catch us in exotic places: varnishing.

Our Sydney-based friend Pat Scott on Osprey IV, a new off-the-shelf Bavaria, was bemused to meet us for the first time in a favourite spot, Le Carenage, New Caledonia, on our hands and knees giving the capping its bi-annual treatment to keep it gleaming like a chestnut.

A quick coat of varnish in the morning before the sun gets too hot, before a soak in the nearby hotpool and a rinse off in the waterfall. Maintenance does not have to be painful.

A hot tip for warmer climates, from John at Havens Boatyard in Nelson, was to add Penetrol to the varnish to keep it flowing. We still use International Goldspar and good quality brushes.

Earlier in New Caledonia, we were amazed to recognise another wooden boat, Sulu Ya Pili, a beautiful Laurent Giles designed ketch, which we had been keen to buy in 1989 in Devon UK. The French owner kindly invited us aboard and we speculated in school French, on the chances of seeing the boat again on the far side of the world.

I really should not have been surprised, thirteen years later, anchored in Lamen Bay, Vanuatu, when Sulu Ya Pili sailed in, looking better than ever. Her new owners deserve an award for wooden boat restoration and probably wonder why the strange British neighbour took so many photographs. Every visit to Noumea, we now walk up the pontoon to admire her from afar: sad, wooden boat stalkers.

There are a few of us, as Wooden Boat Festivals around the world attest. We have Wooden Boat magazines to feed our habit and specialist brokers to seal a deal when the time comes to sell.

Sadly, with higher labour costs and challenges of finding suitable timbers, from planet friendly sources, wooden boats have declined from the heady days of America’s Cup beauties and William Fife and sons’ heyday. It is reassuring to know that skills are being kept alive in wooden boat schools round the world: Franklin, Tasmania, Lyme Regis, UK and Maine, USA to name a few.

It is heartening that wooden boats are being restored and maintained, because for us, they definitely tick
all the boxes. ≈