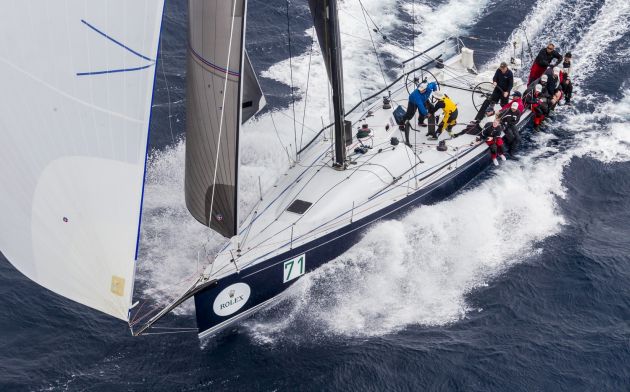 The NSW TP52 Balance, the appropriately named yacht of financial guru Paul Clitheroe, is the leader for overall honours in the Rolex Sydney Hobart Yacht Race and now has to await the arrival of two European yachts tomorrow, her immediate challengers.

The Swiss boat Teasing Machine and French/Belgian entry Courrier Leon are the leading boats at sea to challenge Clitheroe’s attempt to win the coveted Tattersall’s Cup in the Cruising Yacht Club of Australia’s bluewater ocean classic.

Balance crossed the finish line at 4.50 pm today, seventh across the finish line behind line honours winner Comanche and the first TP52 a record nine that started. Only three have survived: Balance, Celestial and Ragamuffin 52.

Teasing Machine appears to have the better chance of the two Europeans. She was well down the east coast tonight and must arrive in the early hours of the morning to become the new leader in the clubhouse.

For Clitheroe it was a surprise to hear that they had done so well on corrected time. There had been little time to check outright positions on the race website.

“We are the clubhouse leaders, guys. That’s fantastic,” Clitheroe said on arrival and then told the story of the highs and lows. “We got six hours of beautiful running then absolutely smashed. The bottom of my mainsail is torn to pieces. It was a terrible, terrible seaway, lumps and bumps. Most of the crew have got the usual bruises and bashes.

“Then we got into Bass Strait and we stopped dead. For four hours we didn’t move so we got all our gear out, dried our undies and generally recovered in Bass Strait. Eventually we got to the Tasmanian coast, got a bit of wind last night and I have to tell you, thanks Tasmania, had the best run of my life.

“We just turned at Tasman Light, a nice southerly picked us up, Code Zero all the way across and seriously I reckon we did it in two hours, 45 minutes, averaged 16-17 knots.

“It was a great finish to a bloody awful Hobart actually. I don’t know why I do this.

“Our first goal was to be the first TP52, which we were last year. That’s all you can do. The rest is in the lap of the gods.”

Balance's pisition as likely winner has been strengthened overnight as the Derwent has claimed another victim. Eric De Turkheim's Teasing Machine missed the magic midnight cut-off time, when the winds tradionally go light, and has fallen back to sixth place. Still with nearly 10nm to go, she was making just 0.9 of a knot.

The cheapest boat in the fleet, Shane Kearns $32,000 S&S 34 Quickpoint Azzurro, is currently the biggest threat to Paul Clitheroe. She still has 147nm to sail, giving plenty of time to make up the three hour deficit she has against Balance.

Courrier Leon and defending champion Wild Rose are also still in the mix, but with big deficits to make up today.

In the Corinthian section for boats that are truly amateur, almost every yacht still has more than 100nm to sail, so the battle for the trophy is on in earnest. Quickpoint Azzurro currently leads from Chancellor and Wild Rose.

Only Division 0 has been definitely decided, with all boats in that division finished. Rupert Henry's Chinese Whisper was the winner, ahead of Ichi Ban and Comanche.