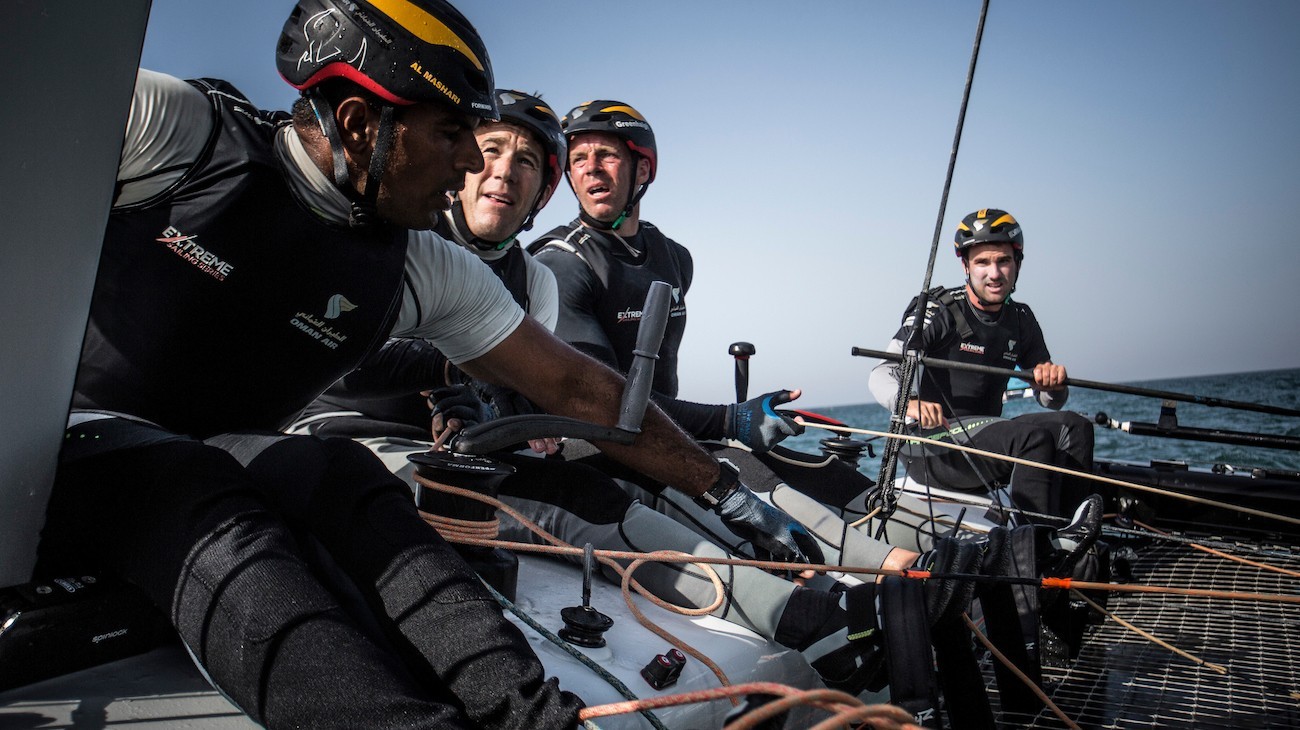 Home team Oman Air snatched the overall lead in the opening Act of the Extreme Sailing Series in a second day of intense action in Muscat today.

Phil Robertson’s men made amends for their slow start to the 2017 season opener yesterday with a masterclass of consistency, claiming one win and two runner-up spots over the five races held off Muscat’s Almouj Golf.

Their impressive record helped knock early leaders SAP Extreme Sailing Team off the top spot at the halfway mark of Act 1, the first of eight that make up this year’s Extreme Sailing Series.

Danish-flagged crew SAP Extreme Sailing Team looked set to retain their position at the head of the overall standings thanks to two race wins and a second as the fleet of nine crews enjoyed high-octane racing in near-perfect breeze of 12-14 knots.

But in the final race of the day they got caught in a patch of light wind and had to settle for eighth place, relegating them to third overall, tied on points with Austria’s Red Bull Sailing Team.

Meanwhile reigning Extreme Sailing Series champions Alinghi, from Switzerland, followed up three third-place finishes with their first race win of 2017 to go into the penultimate day of Act 1 just two points off the podium.

With two days of racing completed and two more yet to sail, Oman Air top the table by one point and just three points split the first four teams – a clear indication of how tight the Extreme Sailing Series is set to be this year.

Oman Air tactician Pete Greenhalgh said preparation was the key to their comeback.

“We didn’t really have time to get ourselves set up yesterday plus we had some gear failure so we made sure we learned from those lessons and it seemed to pay,” he said. “We still made a couple of little mistakes but we are happy, we sailed well and when we made mistakes we were able to recover them. We’ll now look at where we feel there are gains to be made and go front foot forward into tomorrow.”

Alinghi’s helmsman and co-skipper Arnaud Psarofaghis said his team found their form today after a few tricky races, culminating in victory in the last race of the day.

“In the first race we had some knots in the sheets and it wasn’t working very well so we had to sit down and say, ok let’s start again but more simply,” he said. “From there it went really well and we had a lot of podium finishes. In the last race we were ahead from the beginning so it was great to end the day like that.”

After impressing on their Extreme Sailing Series debut yesterday wildcard crew Team Tilt, made up of Swiss sailors under the age of 24, notched up their first race win when they stormed to victory in the second race of the day.

Skipper Sébastien Schneiter, who competed at the Rio Olympics in the 49er dinghy class, said his young crew will aim to replicate that success over the remaining two days of the Act.

“It was a really nice race for us,” he said, “but now we have to be a bit more consistent. Two of the races today were a bit average, but we learned a lot from them and we’re really happy. We’re here to learn as much as possible and we’re taking every race one by one, trying new things, and pushing as much as we can. We’re here without pressure, so we’re just going to give everything we have.”