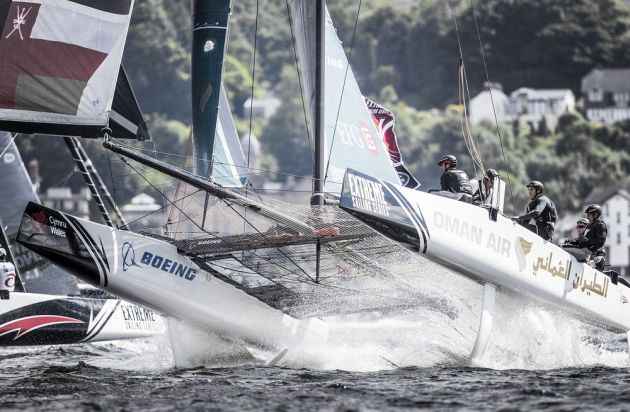 Larson’s expert crew have impressed throughout the thrilling regatta, rarely finishing off the podium as the seven international crews do battle in typically blustery conditions in the Welsh capital Cardiff. But as racing entered its penultimate day today Oman Air, the current Extreme Sailing Series overall 2016 leaders, changed to a new gear that saw them score four race wins and a second from eight races.

They are now firmly top of the Act 3 leaderboard with a comfortable 17-point buffer over closest challengers SAP Extreme Sailing Team going into tomorrow’s climax. It wasn’t all plain sailing for the Omani-backed team however – trimmer Ed Smyth nearly got washed overboard when their GC32 catamaran was hit by a strong gust.

And just when it looked like they would score their fourth race win of the day, Taylor Canfield’s CHINA One team blasted past and pipped them on the finish line. Larson said his crew – who welcomed Welsh rugby star Alex Cuthbert onboard for a lap of Cardiff Bay prior to racing – will keep pushing for their second Act win of the 2016 season.

“It was a wild day again but our team dug in deep,” Larson said. “I was a bit shaky with my starts early on but their great boat handling and athleticism just pulled us back through. The secret was not getting into any trouble and doing all of the small things right. It was easy to get into trouble – we got really close to hitting the Chinese boat but we just missed them.

“In the last race we had a great run in with CHINA One – they were coming in fast on our heels and I think we had backed off a little conservatively. Their speed was incredible and they pressed us into the finish. Now it’s a case of keeping our foot on the throttle and hopefully the results will take care of themselves.”

Canfield’s rookie team finish the day in fourth place but in an indication of just how close racing is just five points now separate second-placed SAP Extreme Sailing Team and fifth placed Alinghi. The US Virgin Islander said he has his sights firmly set on his first podium finish of the year as the battle reaches its peak.

They will begin the final day of racing just one point adrift of Austrian crew Red Bull Sailing Team and two behind SAP Extreme Sailing Team.

“We had some ups and downs but to finish on a win is great,” Canfield said. “We worked hard all day and overall we’re really happy. The last race was definitely a close finish – Oman Air have been the pace setters in the Series so to take it right at the finish was great. As far as we are concerned the podium has always been in sight.”

Swiss crew Alinghi, winners of Act 2 in Qingdao, had a mixed bag of results including one race win but also a last-place finish. Their challenging day was summed up in the final race when one of their boat’s two rudders fell off halfway round the course, leaving them to limp home just three seconds inside the time limit.

Sail Portugal, under the leadership of former Olympian Diogo Cayolla, showed that despite their current position of sixth in the standings they can still challenge for the lead, with two podium finishes. There was also a welcome return to action for Land Rover BAR Academy after structural damage forced them out of five of yesterday’s six races.