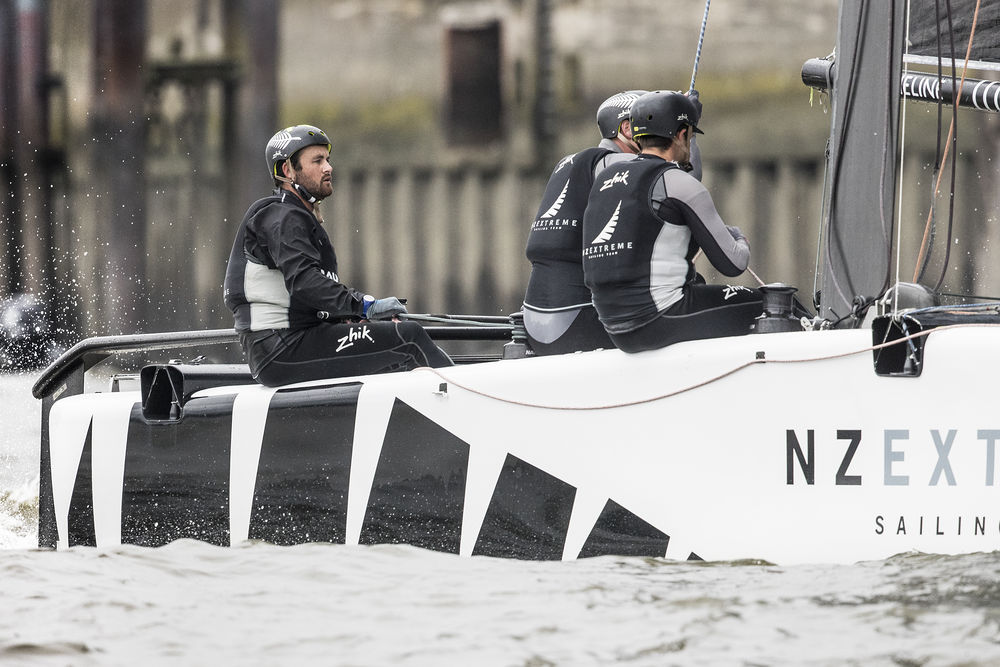 Oman Air maintained its lead in Hamburg while Red Bull Sailing Team climbed from bottom of the table to second after seven nail-biting races on the penultimate day of Extreme Sailing Series™ Act 5, Hamburg, presented by Land Rover.

Four second places and three fifths were enough to keep Oman Air ahead by a comfortable margin while the rest of the fleet took part in a game of snakes and ladders, resulting in a leaderboard reshuffle.

But with only four points separating second and sixth place and a full day of racing ahead, including the final double-points race, there is everything still to play for.

“We have a nice little lead, and that's good to have going into the last day, but it's still not enough, you need so much more,” said Oman Air skipper Phil Robertson.

“In this fleet it's so easy to lose that lead, eight points go in a heartbeat. We've just got to keep focussing on one race at a time and do what we do best.”

Austrian-flagged Red Bull Sailing Team notched up two race wins and a second on a grey day on Hamburg's River Elbe, and finished tied on points with SAP Extreme Sailing Team.
“Today was good for us. It was really tricky but the boys did a great job, worked really hard and were fighting for every point,” said skipper Roman Hagara.

“It's really tight in this fleet. We're just trying to catch up on the leaders, and then it's down to the double-points final race. If we are in reaching distance of the leading boat at that stage, then that's perfect.”

Current season leader SAP Extreme Sailing Team makes up the podium. “It felt like it was really up and down for us today, it was very tough racing,” said Adam Minoprio, who helmed the Danish squad to one win, and nearly bagged another until disaster struck.

Thinking they had finished the race, but not realising they had one lap of the course left to sail, they watched their mammoth lead disintegrate, only managing a fourth-place finish.

“We still feel that we have good speed off the line and we're steering around the course well. We're sailing the boat with confidence. It feels as though the deck is stacked against us, but we're battling on and the guys are doing great. I feel like we're in contention,” added Minoprio, who has helmed the team to two Act victories already this year.

A mixed bag for 2016 champion Alinghi, including two wins and two sixth places, sees it sit in fourth, just two points shy of Minoprio and his men.

A day of changing fortunes for NZ Extreme Sailing Team saw them drop from second after the penultimate race to finish the day in fifth. However co-skipper Chris Steele remains positive.

“The guys did a great job of battling away and getting the boat round the track. It was pretty tricky with the current, and we made a couple of mistakes at the start which made it hard, but we did bounce back with a race win and a couple of podium positions,” said Steele.

“The points are incredibly tight and we're still on for tomorrow, we're still on the hunt,” added Steele, whose team finished the day on equal points with Alinghi.

Despite claiming its first bullet since Act 2, Qingdao, Land Rover BAR Academy dropped from second to sixth overall, followed by wildcard entry Team Extreme, whose moment of glory came with a third-place finish in race six.