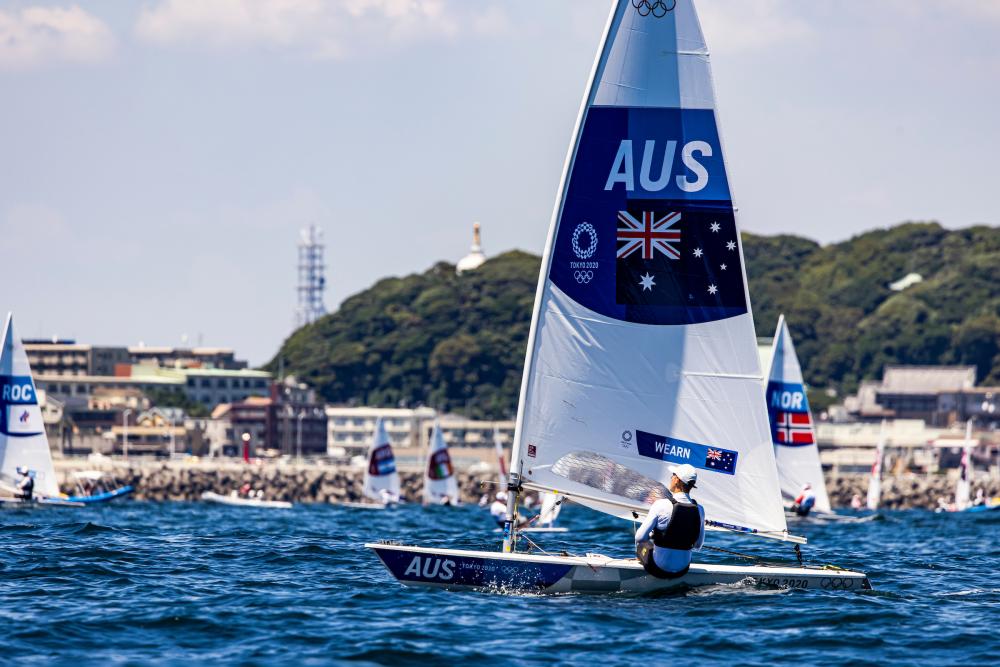 It’s the eve of competition for sailing at Tokyo 2020, and the boat park has been a place of focus and precision in the final 24 hours before battle commences in the Laser, Laser Radial and Men’s and Women’s RS:X.

While other fleets are still training and putting their boats through the measurement process, sailors in the four fleets due to begin racing on Sunday 25 July have either taken time out off-site to relax and unwind, if it’s possible to do so on the eve of the biggest regatta of your life, or crammed in some last-minute time on the water.

Then again, windsurfers pride themselves on their laid-back approach to life, and it’s hard to detect any nerves from the outside. What’s going on inside their heads though? Who’s going to rise to the occasion, and who will crumble under the pressure, under the weight of national expectation?

Someone who has been waiting four, no, five years for redemption after finishing in the ‘leather medal’ position of fourth place at Rio 2016 is Lilian de Geus. The Dutch windsurfer is seen as the favourite for gold in the Women’s RS:X fleet. A three-time world champion and reigning European champion, de Geus would probably trade all that international success for an Olympic Gold.

“The Olympic Games is definitely the most important event,” commented de Geus. “There is only one entrant per country per event, unlike at the Worlds, and that makes it a special event. It’s a big event that you work towards for four years, or this time five years.”

The waiting game is the hardest thing, and de Geus is not alone in wanting to get on with it, especially after the long, long delay caused by the pandemic. “I’m really looking forward to the start. It’s been a long time with the one-year postponement.”

Psychologically, the 27-year-old struggled to stay on track with her campaign. “For the first half-year we had no races, no competitions, and that was quite tough for me because you don’t have any goals.

“I was World and European champion at the time, but I didn’t have any motivation. I had struggles with my motivation until we got some competitions in, and I got it back, and I went to Lanzarote to train. And then we had the Worlds in Cadiz and the European Championships, so we had a pretty good program. I feel like I have a higher level now than I did last year.”

While the breeze during the build-up period has been mostly light to medium in Enoshima, the forecast points towards the effects of a strong weather system making itself known a couple of days from now. That doesn’t faze de Geus. In fact, she relishes the prospect of variety as it will help deal with the specialists in the fleet, the ‘one-breeze wonders’.

“We had a lot of light winds, but you can’t do anything about the forecast. It looks like we’ll get some variation, some strong wind days. It would be nice to have some variation during the Olympics. It’s more challenging.”

One of the benefits of being part of a bigger sailing team with participation across multiple events is the ability to share knowledge, particularly vital, race-winning intel on wind, wave and tidal conditions.

Sailors starting later in the regatta will be watching the windsurfers and Lasers intently on day one of the competition. For the sailors – and for any fans wanting to dig into the detail – they can use the GPS tracking data to help work out which side of the course is paying.

While in the windsurfing there is the strong prospect of a Double Dutch performance, with de Geus looking strong in the women’s division and Kiran Badloe even more of a nailed-on favourite in the Men’s RS:X, the Laser Men’s One Person Dinghy fleet is wide open.

Matt Wearn carries the pressure of expectation, following in the footsteps of Tom Slingsby’s runaway Gold for Australia at London 2012, then the last-gasp gold won at Rio 2016 by Tom Burton, the man Wearn beat to Aussie selection for Tokyo 2020.

Can Wearn make it three in a row for Australia?

Against Wearn you could equally favour Philipp Buhl (GER), Elliot Hanson (GBR), Tonci Stipanovic (CRO), Pavlos Kontides (CYP) and Jean-Baptiste Bernaz (FRA). Oh, and Brazil’s Robert Scheidt! Aged 48, he has competed at every Games since the Laser made its Olympic debut at Atlanta 1996. A regatta he won, by the way. Five medals already to his name, can the Brazilian magician make it number six in Tokyo?

There’s a broad array of names who could be challenging for the Laser Radial Women’s One Person Dinghy podium, notably Anne-Marie Rindom (DEN) and Emma Plasschaert (BEL). Could Annalise Murphy’s late run yield another medal for Ireland, following on from her incredible silver medal performance in Brazil five years ago?

Possibly Japan’s own Manami Doi (JPN) could make the most of local knowledge to cause an upset. But Marit Bouwmeester (NED) is a woman on a mission. With a silver from London 2012 and gold from Rio 2016, the defending Olympic Champion looks as strong as anyone for the title in Tokyo.

It’s not beyond the realms of possibility that, by the end of day one of competition, the Netherlands could be leading in three out of four events.

The Laser Radial and the Men’s RS:X will be the first fleet to set sail at the Tokyo 2020 Olympic Sailing Competition.

Find out how to watch tracking in your country at: https://tokyo2020.sailing.org/multimedia/tracking/

Full results will be available at the Olympic website: https://tokyo2020.sailing.org/results-centre/