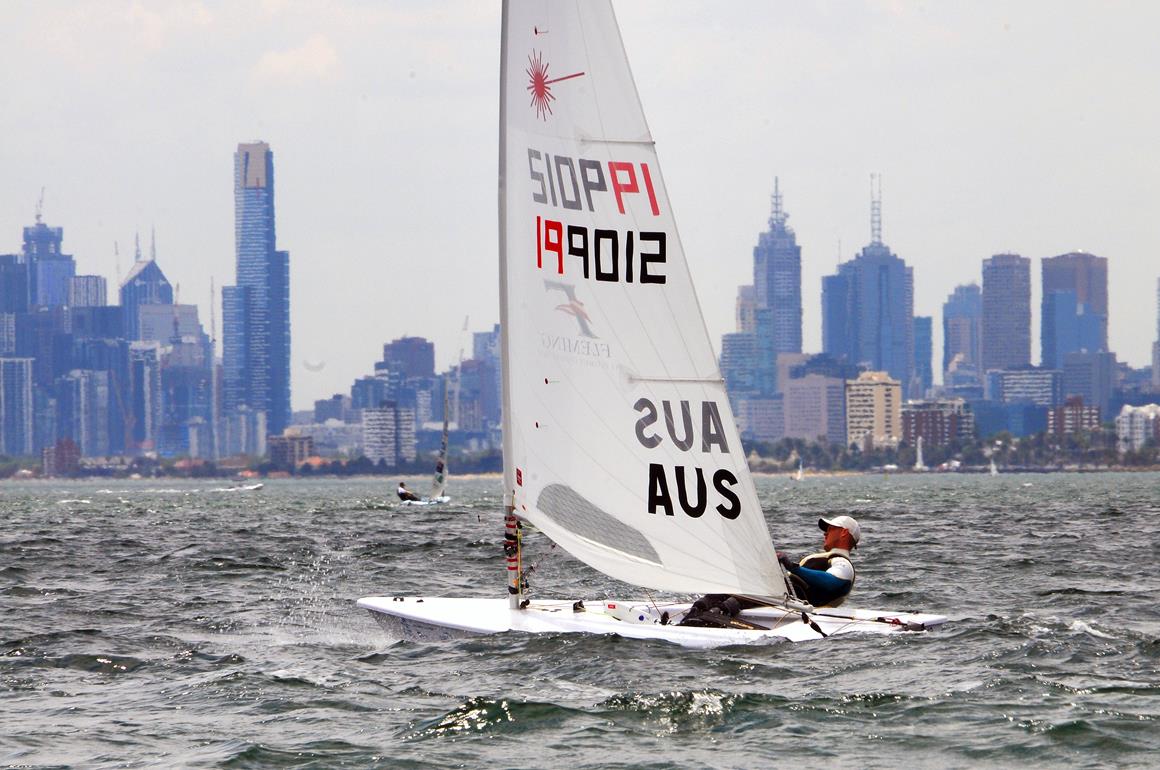 It was another day of extremes at Sail Melbourne International for the second day of Olympic class racing (Thursday, 30 November 2017). More high temperatures and a hot breeze blowing off the land did not allow the sailors any cool off out on Port Phillip. A full day of racing was completed in most classes though with gains and losses across the fleets.

“It was especially hot today with the wind coming from land and when it started raining today I first thought I was hallucinating,” 2017 Finn World Champion Max Salminen from Sweden said about the conditions. “It was a tricky day with big pressure systems coming and going and lots of gains and losses. But I rather take the heat than the Swedish winter.”

Salminen currently ranks equal second in the high-calibre international Finn fleet racing in Melbourne, which is led by Australian Sailing Team’s Rio 2016 Olympian Jake Lilley. Lilley built his lead to six points after winning both races of the day, while 2012 Olympic champion in the Laser and new addition to the Finn class Tom Slingsby defended his second place after a third and sixth place and is tied with Salminen and former world champion Ed Wright after dropping their worst performance.

“Jake has a really good scorecard and he will be hard to get, but Tom I will try to get. It’s a really good fleet here at this regatta, better than I could hope for so I’m super happy to be here and it’s glamour sailing conditions. I heard it is supposed to become a bit stormier but I’ll be happy to have that,” Salminen added.

Happy faces were seen in the RS:X fleet after the sailors completed four races following only one race on day one (Wednesday, 29 November 2017).

“The conditions yesterday were pretty bad for us and we only got one race in, but today we managed to have four races in solid conditions. It was a really good day racing the other RS:Xs,” second placed Alex Halank said.

Alex Halank is the U17 freestyle windsurfing world champion and holds the national title in four windsurfing disciplines (freestyle, free race, slalom and wavesailing). He will be representing Australia at the 2017 Youth World Sailing Championships in Sanya, China (9 – 16 December 2017) and is making the most of racing in a mixed fleet of RS:X and BicTechno boards and against experienced windsurfers such as former Australian Sailing Squad’s Jo Stirling, who is leading the fleet after a winning all five races.

“It’s really good to be racing in this kind of fleet. We have people from all over Australia here and it’s great to have both the Technos and the RSX in one fleet and to be able to compare myself against them. Normally, I don’t get to race with too many good sailors, so it’s good that everyone is here,” Halank said.

“This is definitely one of the best events I could possibly have before heading to the Youth Sailing World Champs in China and it’s a great opportunity to get used to the board as I don’t usually sail the RS:X. It’s been great to race against Jo Stirling here, who is one of the best sailors in our class in Australia. I can use that to learn a lot of different things like starts and tactics, how to set up my gear and other on water things. And I’ve been getting a bit closer to Jo each race, so hopefully I will still be able to catch her,” Halank added about the task at hand.

“The calibre of our guys here is quite high, so if you’re not on top of your game you’re not going to win races. Today I probably sailed better. Yesterday I didn’t sail too badly, but just not good enough,” Tom Burton said.

Burton admitted that his post-Rio performances had been below his standard – despite capturing a World Championship silver medal in September – but revealed his aim to return to peak performance by the end of the southern season.

“I set a few goals through the summer, trying to keep training so that in Europe next year I can come at it at 100 per cent,” he said. “Throughout this year I was just kind of sailing at what my potential was at the time. I don’t think it was anywhere near my fitness levels and motivation levels from previous years. I’m kind of using the Australian summer to get back to that level, hopefully.”

In other results, 470 two-person dinghy Olympic silver medallists Mat Belcher and Will Ryan continue to sit in first place and on equal points with Daichi Takayam and Kimihiko Imamura from Japan after both crews posted a fourth and first place across the two races of the day. Racing in a mixed 470 fleet, Rio 2016 Olympians Carrie Smith and Jaime Ryan are in overall fifth place and the top ranked female crew.

For all Day 2 results see here.