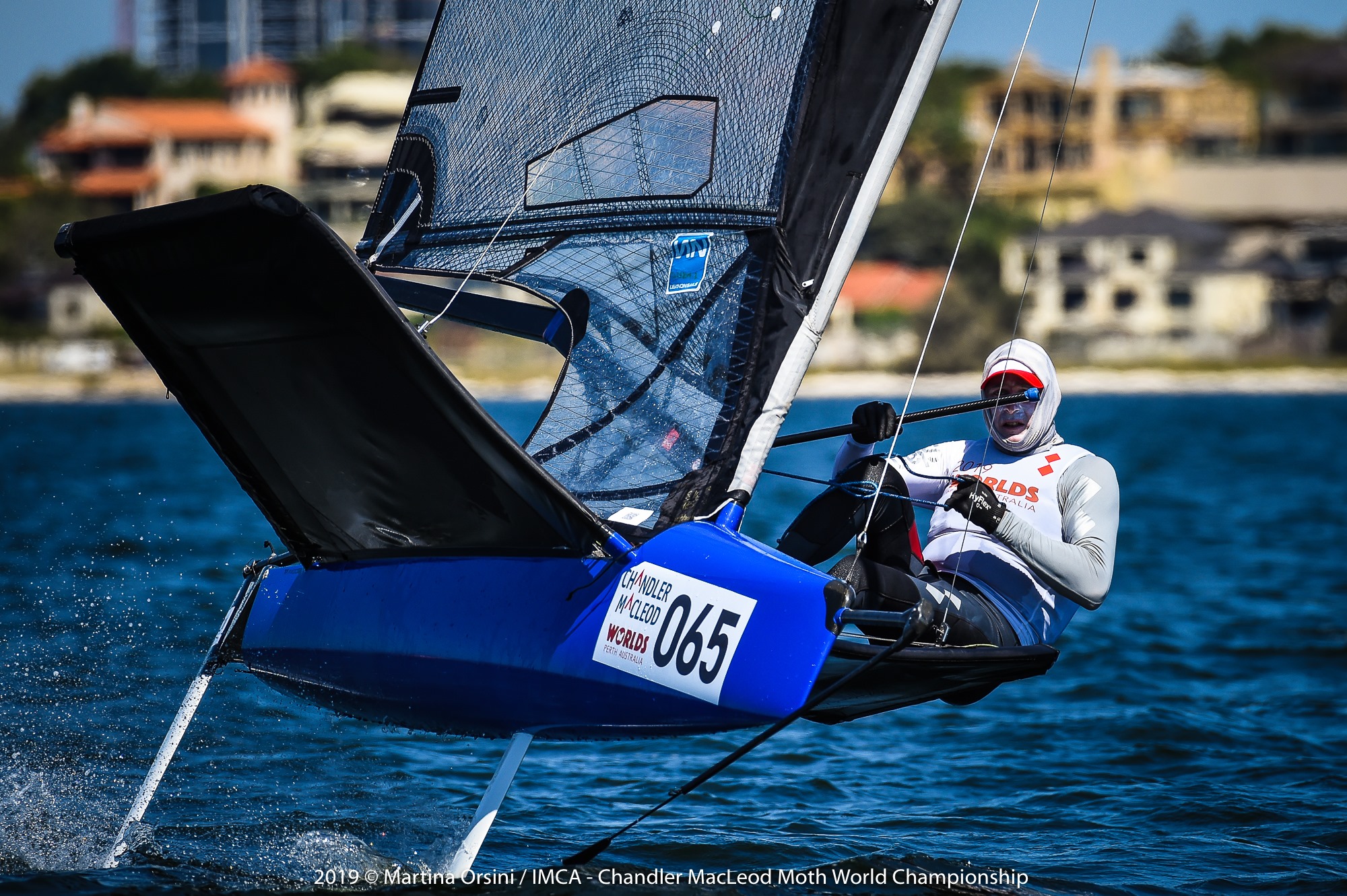 Australian Olympic gold medallists, Tom Slingsby and Tom Burton were the stars of the show on the final day of qualifying and ahead of the Gold fleet finals at the 2019 Chandler Macleod Moth Worlds in Perth.

Other positions were very much up for grabs to make the cut for Gold fleet racing which kicks off after tomorrow’s lay day.

The fleets will be split for Monday’s finals racing, allowing the first chance to see the best sailors all on the same course for the first time.

Slingsby, who won the National Moth Championship a few days ago, has solidified his position as the Championship favourite, following a trio of wins from as many races today.

His nearest competitors, Francesco Bruni (ITA), Brad Funk (USA) and Matthew Chew (AUS) all had solid days as well, but were just unable to get near the current SailGP champion skipper.

Funk said after the first race on the Blue course that Slingsby was, “just able to put the hammer down,” and muscle his way into commanding leads off the start.

“Every day is a little bit different, but this left side just keeps paying off in good pressure,” Funk said.

“But Tom sails his own race then it’s kind of between four other people for second through fifth.”

Funk said the race course wasn’t providing the pumping sea breezes that Perth was renowned for, and there were a few passing lanes up the top end of the course.

“At the top, it’s not just solid pressure up there, you’ve got to get the first pressure, so I went around a different gate and managed to get it, sail downwind and pass two boats.”

On the Blue course, Langford had some interesting moments before the start of Race 6. He was seen with the boat mounted on a RIB, applying tape to the bowsprit of his Bieker Moth. However, it didn’t seem to faze him as he comfortably took the win from Burton to round out the day.

There were many sailors who found the course tricky, as the late start and patchy sea breeze began to die out, making it a case of joining the dots and staying in the pressure.

This World’s continues to show a particularly interesting narrative across the manufacturing landscape with different pieces of kit all able to win races and a range of very different setups all racing along at similar speeds.

Exocet, Bieker and MACH2 are taking plenty of wins and Italy’s Olympic and America’s Cup sailor, Francesco Bruni, is also having some solid results on the Manta.

It’s a day off on Sunday, with a lot of the sailors heading to Rottnest Island for the day. The action picks up again on Monday with Live Streaming of all the Gold Fleet finals racing on Monday, Tuesday and Wednesday to finish off this regatta.

During the final three days of the event when the title will be decided, the famous Fremantle Doctor is expected to kick in, when Perth returns to normality, after a number of weeks of scorching temperatures and fluky and challenging conditions.

Full results can be found at http://bit.ly/MothWorldsResults