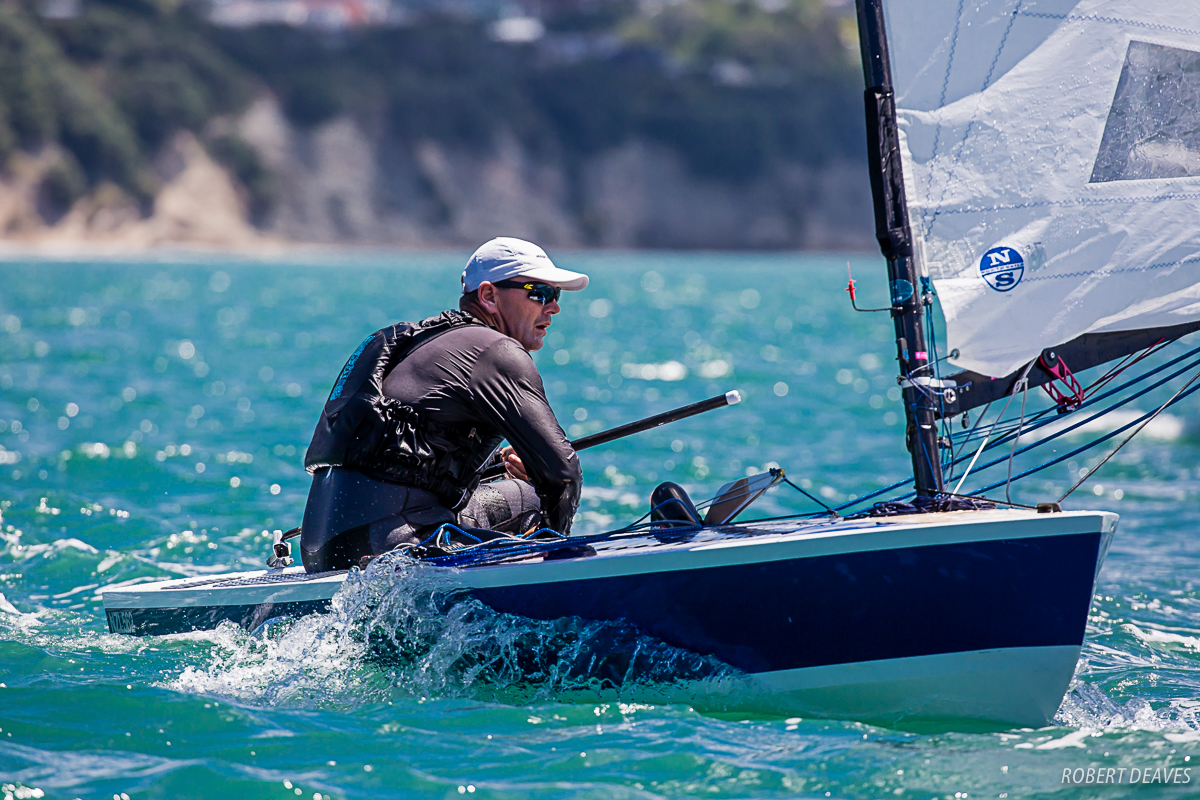 Olympians Dan Slater and Fredrik Lööf took the race wins on the third day of the 2019 Symonite OK Dinghy World Championship at Wakatere Boating Club, in Auckland, after two more races in a very shifty offshore breeze. Josh Armit ended the day in second with Andrew Phillips in third.

Early morning showers gave way to a beautiful, hot and sunny day by race time, though the offshore wind caused its fair share of tears through the fleet with many favourites deep at times and many sailors scratching their heads in frustration. But many of the same sailors also made it to the front each race, while others made it look quite hard at times.

Race 4 started on time and got away first time in 8-10 knots with a huge split left and right from the 650 metre long start line to accommodate the 111 boats taking part. Slater led at the top from Rohan Lord and Tim Davies, from Australia. Lord took the lead on the second round but Slater pushed hard on the final upwind with shifts from all directions to take the race win. Even 100 metres from the finish it was anyone’s game with 50 degrees shifts and huge pressure changes. The final shift let Slater cross ahead of Lord and Luke O’Connell.

There was slightly more wind for the second race of the day. Thomas Hansson-Mild, from Sweden, executed a perfect port tack start from the pin and crossed the entire fleet. Lööf started at the boat and also went right. At the top, Lööf rounded first from Matthew Mason, Slater and Hansson-Mild. Lööf stayed in front all the way to record his first win of the week, with Slater sailing well again to secure second from Nick Craig, from Britain, who took a few places on the final tricky upwind.

“It was a little bit different to yesterday but really head out of the boat stuff and trying to get clear air. I was a bit fortunate today. There was quite a bit of line sag so it was a bit easier to get off the start line. And then I was able to sail a lane.”

“I had a first and a second so that keeps me in the hunt with a lot of racing still to go, with a pretty miserable forecast for Thursday and Friday.”

On managing these conditions in a big fleet. “I think when it flaps you tack basically. You got to be in position to be able to tack when you have got so many boats, and it makes it really difficult sometimes if you not able to tack and sometimes you just have to suck it up sailing in a bit of bad air and just have to keep sailing straight because you are still going the right way.”

He said he has a lot of experience on the waters where the racing is set. “I am have three done Olympic campaigns on that same block of water, so my experience going up and down that beat is pretty vast. So I do feel much more comfortable than probably most that are sailing there.”

Lööf came into the event as European Champion and clear favourite. However even he has had trouble finding his way up the beats. He remains in fourth but is closer to a podium position after the bullet today.

“It was a really tough day today. There are so many things happening. I am very impressed by Dan Slater. He is just putting the boat in the right place all the time and getting firsts and seconds. Also Josh Armit is sailing really, really well.”

“Finally I had a good race in the last race. But I was happy at the end of the day so all good.”

Former world champions, Nick Craig and Thomas Hansson-Mild had better days, both moving into the top 10 after some forgettable races on the second day of racing. However the Kiwis can still boast seven out of the top 10, which is pretty impressive given the quality of the fleet here.

With five races and a valid series now sailed, the fleet can have a well-deserved day off on Wednesday. Racing is scheduled to continue on Thursday at 13.00.

The series concludes on Friday 15 February.