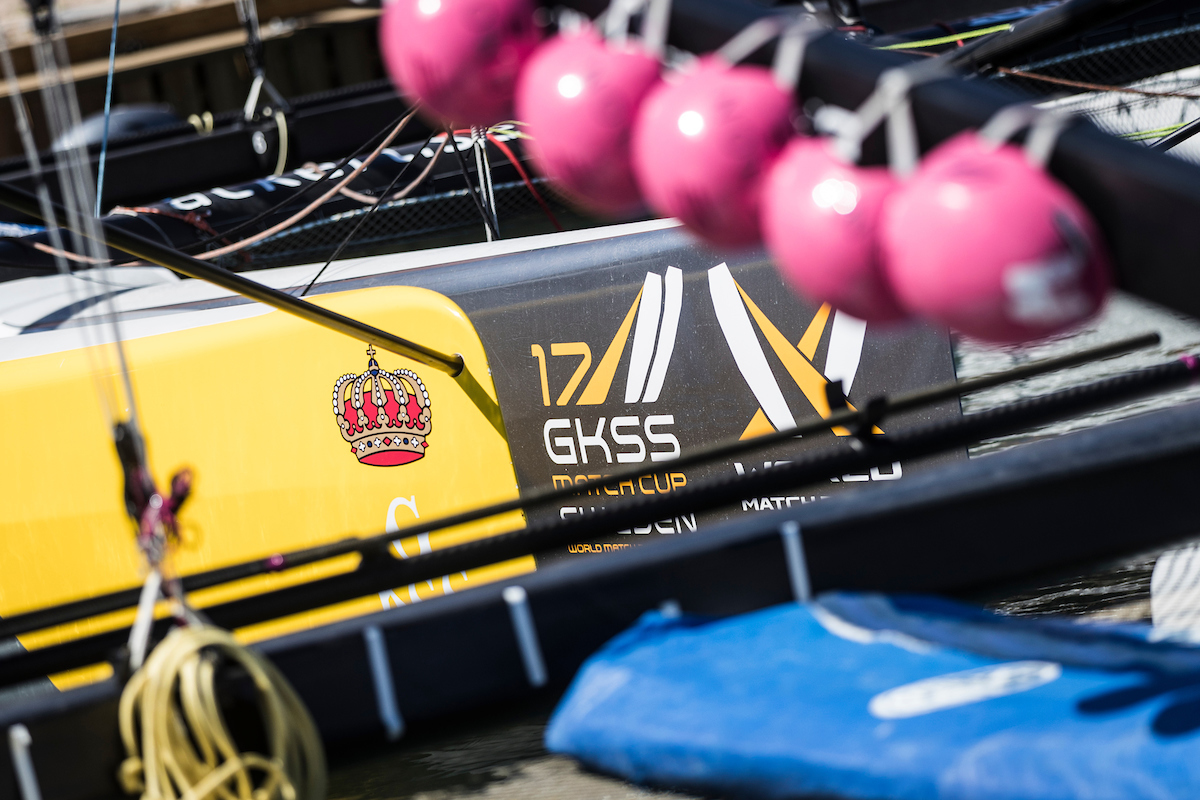 “This morning we had 30 knots average and gusts up to 40 knots – way outside the limit,” explained World Match Racing Tour PRO, Mattias Dahlström. “Plus this westerly direction creates a really bad sea state.” While the wind dropped this afternoon, the sea state hadn’t and at 1530CET Dahlström cancelled racing.

Remaining ashore today allowed crews to appraise their competition. With the America’s Cup just over and in a year following the Olympic Games, all manner of world class sailors have descended upon the Swedish island paradise of Marstrand for the GKSS Match Cup Sweden.

Having just ﬁnished his second America’s Cup with Oracle Team USA, is Australian Kyle Langford, competing here in Ian Williams’ GAC Pindar crew. Then there is Italian Pierluigi de Felice, a America’s Cup campaigner since 2003 including Luna Rossa’s last two catamaran campaigns. He is here with Chris Steele’s 36 Below Racing.

These days M32s are typically sailed by four ‘big’ crew rather ﬁve small ones, so the crew line-up for GKSS Match Cup Sweden includes Olympic Finn sailors Jonathan Lobert and Pieter-Jan Postma, respectively third and fourth at London 2012. While Postma is leading his own crew on Sailing Team NL, Lobert is sailing with Eric Monnin on Albert Riele Swiss Team.

Lobert has just had four days sailing the M32 catamaran. “It is an exciting boat, fun – a big change from the Finn. It is very nice to be sailing in a crew. Match racing is also new to me, but Eric is very experienced and he knows what to do.”

Several other Olympic sailors are in the all-female crew on Team Magenta 32. Skipper Sally Barkow represented the USA in the Yngling in Beijing, Kate Macgregor and Annie Lush were in the British Women's Match Racing crew at London 2012, while Switzerland's Natalie Brugger raced at Rio 2016 on the mixed Nacra 17 catamaran.

GKSS Match Cup Sweden is 23 years old this year and its famous venue, Marstrand, has emerged as the new spiritual home of match racing. This is why it still attracts old hands from this discipline of sailing such as GAC Pindar’s Ian Williams and Team FLUX’s Johnie Berntsson, through to the new generation of youngsters.

Although just 28 years old, Taylor Canﬁeld today counts as an ‘old hand’ having already won the World Match Racing Tour twice (in 2013 and 2016). “You are seeing a lot of younger teams coming in and they are getting to sail the boat a lot in the qualifying events, but you’ll still see the older guys mixing it up. Match racing is about maturity and time in the boat, so when it comes to tactical decisions they will have made them hundreds or thousands of times.”

Canﬁeld says Marstrand is one of his favourite sailing venues. “It is always on our schedule. Its natural amphitheatre is incredible. It is a lot of fun for us to come as the locals are so engaged in the event. We always have a good time on and oﬀ the water.”

At the opposite end of the experience spectrum among the match racers is 20-year-old Swede Måns Holmberg. However he has the advantage of his father Magnus being one of Sweden’s most successful match racers and a founder of Swedish Match Cup. Signiﬁcantly, having been to this event ever since he was in his pram, it will be the ﬁrst occasion Måns is participating, rather than standing on the cliﬀs watching the racing.

Måns has been competing regularly in M32 catamarans since obtaining his license 18 months ago. “I have had the same team for nine months, so we feel conﬁdent,” he says. Last year his team also beneﬁtted from having access to a boat on which they could train regularly.

Whether he rivals his father for fans in Marstrand, remains to be seen: “I have a lot of friends and family with summer houses around here. We’ve also had some good publicity,” he says.

Racing tomorrow (Tuesday) is set to be in 10-15 knots from the north with a ﬁrst warning signal at 1000.