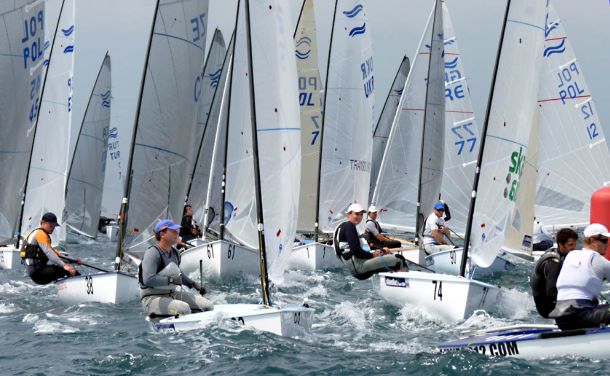 The Finn class is making a welcome return next week to the beautiful city of Split, Croatia, for its 2015 Junior and Senior European Championships. Around 80 sailors from 29 countries have entered for the first major championship of the year. Five years ago Split also hosted the European Championship, with local sailor, Ivan Kljakovic Gaspic (CRO) taking a close win after a dramatic medal race.

With the defending champion, Giles Scott (GBR) missing the event to train in Rio, the three main favourites are all past winners. Ed Wright (GBR) won in 2006, Kljakovic Gaspic won in 2009 and 2010 and Vasilij Zbogar (SLO) won in 2013.

Wright will go into the event as the new World No 1. His third place at the ISAF Sailing World Cup Hyeres two weeks ago was just enough to reach the top spot, replacing Klakovic Gaspic at the top of the board. He is rarely off the podium these days and is looking to turn the tables on Kljakovic Gaspic, after losing the title to him in Split five years ago.

Wright said, “I am sailing better than I ever have and am feeling confident going into the Europeans where we might get some good wind.” He has some good memories of Split, having also picked up his first medal in the class, a bronze at the 2006 Finn Gold Cup, after only 18 months in the class.

After Hyeres he said, “I did some changes in my gear set up this week and it seems to be faster. Now I am ready to go to the Europeans with the aim to win it.”

World No 3, Kljakovic Gaspic has won two European Championships in his Finn career and is sailing as well as he has ever sailed. He revealed that he is very excited to return to his hometown as he hasn't sailed there much recently.

He said, “It is very exciting for me to race in my home town and I am really looking forward to it. I have not sailed much there in the last two years so it will be good to be back there.” He travelled there straight after the ISAF Sailing World Cup Hyeres to begin his preparations. “Split is going to be great host as always and I am looking forward to some great sailing out there.”

Most sailors are already in Split training. Piotr Kula (POL) will be looking to repeat his form of last week when he won the Split Olympic Sailing Week from Kljakovic Gaspic and Jake Lilley (AUS). Lilley will also be hoping to retain his Junior European title from last year, and is the clear favourite to do just that. He is ranked fourth in the world.

Ten races are scheduled from Tuesday 12 May to Saturday 16 May, with the medal race for the top ten and the final race for the rest on Sunday 17 May.