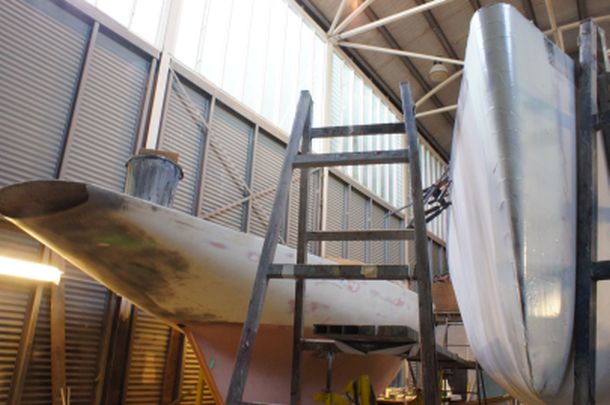 Visit Noakes Boatyard on the water at Berrys Bay and you will find two boats 101 years apart in age and design.

In its main building Peter Langman is quietly working on a new build that adds to the burgeoning 40 foot sport boat market but also adds much in ideas of how a boat will be built in the future. Alongside this exciting build is a boat as far away from that as possible. Mind you it was probably the sport boat of its day.

Rana is an A. C. Barber design that turned 101 years old this year. Originally owned by Noakes Boatyard director Sean Langman, he has gifted this classic full-keeler to his son Peter for his 21st birthday. Badly neglected over the decades, Sean sheathed the hull in glass fibre to retain its integrity but it still requires the full fitout. Something Peter is looking forward to.

But for the present he has to finish off the Ritchie 38.

Designed by Bruce Ritchie this is a boat that both he and his son, Michael, will sail. They currently own a Match 42, Union, but had been looking for some time for their next boat that filled the needs of both of them. Unable to find such a craft, Michael told his 83 year old father that it was time to design one more racing yacht.

The brief for the Ritchie 38 was complex. Michael wanted a yacht he could race singlehanded yet still take the young family out for a sail. Bruce wanted something fast but easy to handle while utilising sound environmental principles.

The result is a design that is “not exactly easy to sail but convenient”, according to Bruce. The hull shape is certainly fast and owes a lot to the current rage in under 40 foot sport boats.

Money and waste was saved by building in ply. Bruce's design was digitised and a CNC machine used to cut the frames and hull panels out of light three millimetre Gaboon ply. The framework for the hull was laid up in a matter of days.

The hull is double skin diagonal and the topsides, due to the fairly severe chine, single straight skin ply. The hull is covered in four layers of carbon fibre and the topsides in three. Both vacuum bagged. There is no hull plug and little waste.

All up displacement will be 3500 kilograms with a 1000kg fin bulb keel at around 2.33 metres. Due to Michael's need to moor the boat at either Clontarf or Scotland Island, the boat is a lifting keeler and the aft-hung rudder is totally removable.

Without the need for extensive carbon fibre laying-up this is a fast build, with the boat on track to launch at the end of July.

While it will race with eight to ten crew, the boat's roller furling jib will also have a jib boom for singlehanded sailing and poling out during non-spinnaker twilight races. It will have a two metre bowsprit for those exciting downwind asymmetrical rides.

Bruce designed a hull with good positive bouyancy and it is expected to be a dry boat at speed.

Down below the boat will be powered by an electric engine. Oceanvolt from Finland will supply the engine connected to a normal sail drive propellor. With the four lithium-ion batteries included the entire power generation unit is expected to only weigh 120kgs. Yet this engine has the equivalent power of a 15 kilowatt diesel.

Charging for the batteries will be via malleable solar panels which roll out on the cockpit floor when docked and can even be laid out to supply constant power when motoring for long periods. The Oceanvolt can also utilise the spin of the propellor to recharge when sailing.

This “gentleman's daysailer” will be decked out in the daughter-in-law chosen colour of Awlgrip dark navy blue and will initially be seen sailing on Sydney Harbour in the twilight weekday races.

How long it will be before the harbour sees the return of Rana is yet to be called.