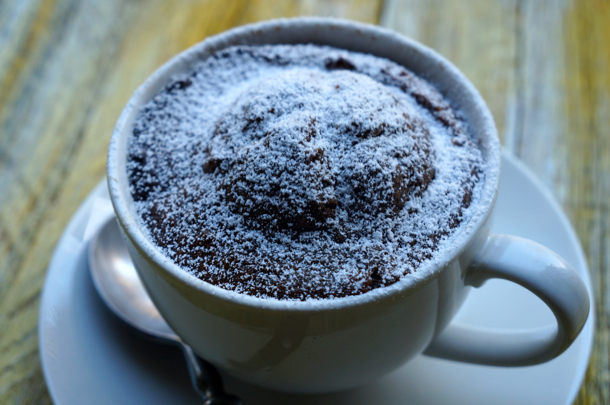 Go find your own mug.

Mmmm, lobster. Rather expensive to buy, but rather easy to catch. Lobster  is one of those ingredients that needs little effort or fussing about to prepare a wonderful meal from.

Butter, champagne and tarragon, I am convinced, are things put on this earth to complement lobster. Nothing else will do. I have used champagne vinegar in the salad dressing and, well, a glass of champagne to go along with this dish just seems right.

In Portland Oregon, there is a wonderful restaurant called le Pigeon that served a wonderful potato crusted sea bass dish. For years I was bashing my head against a culinary brick wall, trying to figure out how they crusted the fish in potato. In 2013, le Pigeon published a cook-book and my misery was finally ended. They used instant mashed potato!

I have paired the fish with a favourite salad of mine: fennel, potatoes and oranges. Canned potatoes save a cooking step and quite a bit of cooking fuel. If all you have is whole raw potatoes, just peel and boil them until cooked through before preparing the salad.

I have not until now, offered dessert recipes in the pages of Cruising Helmsman as I consider them to be a waste of calories and a rather pointless meal type. But at anchor, over lazy weekends aboard before the weather turns foul and Port Phillip becomes nasty, I have been cooking aboard as I might at home. When you are only a few nautical miles from a supermarket and landfall, meals can become a little bit less practical and a whole lot more fun.

Having rid myself of the kettle bbq and upgraded to a sturdy hooded one, baking has become possible aboard for me, even without an oven below deck.

I had guests aboard so I needed enough of a dessert to feed eight, one of whom is on a gluten-free diet. Cakes made of rice are a decidedly northern Italian thing. I had a crack at such a cake using long grain white rice and it was a hit!

Normally made from Aborio rice, I made this cake using instant microwavable long grain rice. Cooking time was much reduced and it still made for a memorable dessert.

Frankly, no one noticed or even cared that long grain rice was used, or that it was an instant microwave product. If you only have uncooked raw rice you might need to add a little extra cream or milk when cooking the rice.

As much as I am not a dessert kind of guy, this teacake recipe was so much fun to develop. No practical sailor would have teacups aboard, it is durable mugs for most of us. So, I had to go ashore and talk my way into borrowing two cups and saucers from a cafe. The barista was sufficiently convinced that I was a lunatic that she insisted I leave a cash deposit for the teacups.

My bbq is transom mounted like most. Even though I was tied alongside a jetty, an uncomfortable swell had the boat rocking in a way not suited to cooking on something not gimballed. On my first and second attempts at baking these teacakes, the teacups fell over. The batter oozed out and began frying and then burning on the bbq flat top. Not the way to impress friends.

Giving credit to my own ingenuity, I fashioned holders from wire coat hangers to secure the teacups while baking. A ridiculous length to go to I admit, but the end result is a pretty looking presentation.

Melt the butter in a small saucepan, add the tarragon and stir to combine and season to taste.

Halve the lobster and brush with a little of the butter and grill face down on the BBQ for a few minutes on a medium heat. Turn lobster over and continue to cook for a few more minutes basting with the butter.

Serve with the avocado and tomato salad.

Quarter the avocado and halve the tomatoes. Combine the oil and vinegar and whisk to make a dressing. Toss the avocado, tomato and watercress in the dressing before serving.

Beat the egg and set aside in a shallow plate.

Make an even layer of instant mashed potato on a second plate. Carefully set the fish onto the egg and then onto the potato so as to add a layer of crust onto the face of the fish but not the sides.

Throw the celery and fennel onto an oiled flat hotplate of your bbq and toss to cook evenly until just caramelising.

Add the potatoes and mint and cook further, until potatoes are warmed through.

Remove salad to a bowl and add the orange segments and fennel fronds and toss to combine.

Add the rice, orange zest, cream and sugar to a saucepan and simmer until rice is cooked. Allow to cool.

Combine the Cointreau and the egg yolk and whisk. Stir into the rice mixture.

Whisk the egg whites until light and foamy but yet not forming soft peaks. Fold into the rice mixture.

Pour rice mixture into a lined 18cm springform cake tin and bake in your BBQ at 180°C with the lid down for about 30 minutes or until a skewer comes out cleanly when pierced into the centre of the cake.

Dust with additional sugar before serving.

Melt the butter. Beat the egg. Mash the banana and combine with all the other ingredients.

Oil 2 teacups and divide the cake batter between them.

Bake in the BBQ at 170ºC for about 25 minutes or until a skewer comes out cleanly when pierced into the centre of the teacake. Serve with whipped cream.